Clark Gable, Burt Lancaster, Paul Newman, Jack Nicholson. The tree of tough, cynical, idealistic and passionate leading men. For a span of 20 years, Lancaster, ruled the roast of flawed, but heroic characters who got, but didn’t always deserve what life gave them.

Films didn’t always have happy endings, but they had to have well-written stories and characters who were believable with genuine human traits, love or hate them, but you can to follow them to the end.

Lancaster didn’t always play a likable fellow, he more often chose men with warts and failings.  He delighted in playing those who would smile as they picked your pocket or led you astray. His characters had confidence, vanity and seized opportunity. He could be heroic but sometimes for questionable motives.

Let’s look at his career through a few of his films.

This was Lancaster’s debut to film audiences, although the first film he performed in was still in the can.  Lancaster and Ava Gardner got top billing, but Kirk Douglas and Edmund O’Brien had the best roles. Lancaster is a tough guy but mostly he holds his emotions on check.  He had a lot to learn as a film actor but the screen loved him. This is a good noir film, it certainly has earned its reputation. Lancaster really leads an ensemble cast.  The scenes he’s in he commands, but Douglas is good too. Lancaster was natural, he could be cool or ramped up, equally believable.

An early film and the first of The Lancaster-Kirk Douglas films. Partners who turn

enemies, a film noir that defines the nasty characteristics both actors would bring to future roles.  Double-crossed, Lancaster confronts Douglas, who won’t honor a past agreement. No honor among thieves. Douglass is suave, Lancaster a hot-head, tough, but not unfeeling. Lancaster cut a fine figure, his athletic build and square jaw adding to his gangster presence.

One of the greatest successes of the year, high grossing film and winner of eight Academy Awards.  Lancaster is Sergeant Warden runs the company office for the Captain Holmes, a very flawed and vengeful man.  Warden carries out the orders but has a bit more humanity than the Captain.  Warden also carries out an affair with the Captain’s wife, that turns into love on his part, but her emotional commitment has strings attached.  He must apply for officers school and she will leave her husband. Warden eventually refuses, and she decides to stay with her husband, as the Japanese have attacked the base as part of their raid on Pearl Harbor.  Lancaster, along with Montgomery Clift were nominated for Best Actor Academy Awards.  This was Lancaster’s 19th film in his seven year career.  He was 40 years old, mature, chiseled and already world-weary.  All of which he injected into the character. 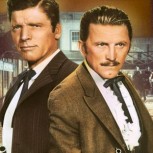 Lancaster as Wyatt Earp and Kirk Douglas as Doc Holliday. The film was directed by John Sturges who would direct a second version of the story, Hour of the Gun.  Lancaster is a very stoic version of Earp, almost carved in granite. The studio wanted the movies’ biggest star and that was Lancaster.  Douglas had the flashier and more interesting role as Holliday.  The film is a fine Western although a lot of this version is pure fiction.  Lancaster does a credible job as Earp but both Jame Garner and Kurt Russell were better.

Released the same year as Gunfight at the O.K. Corral, but a much better film.  In gritty black & white photography, it shows the underbelly of New York City and life in J.J. Hunsecker’s sordid world.  Hunsecker is newspaper columnist with a lot of clout to make or break people, like social media and cable news shows today.  This is a smart time, crisp, colorful dialogue with twisted meaning and underlying motives.  Lancaster is not heroic like Wyatt Earp, rather a man of sordid character and bankrupt ethics.  The film, produced by Lancaster, was a failure at the box office. Talky and unattractive it was called. However, the film is considered a classic and very perceptive in how public opinion is manufactured and sold like wallpaper. Lancaster turns in a first-rate performance although fans rejected the film.

One of his most critically successful films, winning him awards, including a Best Actor Oscar. Was it his best role? I don’t believe so, but it created the most buzz and it was flashy. Don’t misunderstand, he’s incredible in this performance.  Lancaster is truly absorbed in this character, he’s a conman on the joyride of his life.

Lancaster often shared the screen with Kirk Douglas, the two of them mined the same soulless characters; Elmer Gantry and Ace in the Hole share much in common. The two stars battled on the set and competed fiercely, although never good friends, the union produced some of their best work. 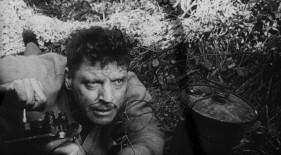 Lancaster portrays a French resistance fighter, who is in charge of keeping the trains moving for the Nazi occupying force.  He gets drawn into the effort to sabotage a train carrying boxcar loads of French art, looted from galleries, to Germany.  He cares little for the art, but it is a national treasure and agrees to prevent the train from leaving France as allied troops advance.  Lancaster produced the film and his character is essentially a blank canvass, very little exposition or backstory is revealed.   Lancaster’s character is always on the move, it is a physically demanding role for a man in his middle forties.

This was the third of three Westerns Lancaster made in the 1971-72 period. The other two were Lawman and Valdez is Coming.  Lancaster was no stranger to violent, action films, but these three embraced the more realistic showing of violence that started with Once Upon a Time in the West and The Wild Bunch.  Ulzana’s Raid was the best of the three Westerns, although none of these films were big box officer earners.  Lancaster’s characters in these films were close to the lone Clint Eastwood figure of his 1960’s and 1970’s Westerns.

A late career Lancaster film. Lancaster and Vietnam don’t exactly go together. The film was a work of love for Lancaster who took a small paycheck and reported put money in the film to get it finished. This was very much an anti-war film, showing the clusterfuck that would define that war. The story takes place in 1964, when America hadn’t yet got its war-footing. Lancaster is an Army Major who is riding out his career guarding an insignificant outpost abandoned by the French a decade before. Lancaster’s Major is doing the dirty work and he makes a fateful decision not to abandon one of his men as the Vietcong are about to overrun the outpost. Lancaster’s part in this film is small and his character is a man worn-out by war and life in general.

Elmer Gantry was loud and impassioned, this Major is tired and approaches conflict in a more methodical way.  These two characters represent the opposite ends of the character scale.

This was Lancaster’s last theatrical film.  The role was small, but it served to connect the time elements in the film.  Lancaster, the old pro, oozed charm in his few minutes of screen time, in the kindly, grandfatherly role of the doctor that worshiped his wife and provided help to anyone in town who needed it.

Lancaster pulsed a charm and magnetism, a twinkle in his eyes and a beguiling smile. From Elmer Gantry to Field of Dreams, he was part rascal. The line between scoundrel and do-gooder is a thin one, as Lancaster reminds us.

Airport (1970) was a miserable film for Lancaster, he hated it. But he needed it. A huge day pay and people in seats, it gave him a hit.  At this point, he was deep in his career and would do some of his best work but other than Atlantic City (1980) and Field of Dreams (1989), would have no more hits.  The 1970’s was a very uneven period for Lancaster, a slew of films that no one saw, a few very interesting characters but muddled direction, some international projects and a few low-budget films.  He would get some good reviews, and he admitted choosing some films simply for the money.

Lancaster was the first actor of his generation to form his own production company. For most of that time, his producing partner was Harold Hecht.  Sadly, while the various iterations of this company had great success, they had large failures that seemed to erase much of what they built.  In the 1970’s, his producing career ended after failed projects and relations soured between the partners.  Other actors followed Lancaster’s lead, developing their own projects and owning the film negatives.

Lancaster never really escaped the persona of a beefy, tousle-haired, toothy hot-head. He was all of that, particularly the hot-head; his temper and dictatorial actions on the film-set were well-known.  He fired directors, forced script rewrites and intimidated some of the other actors, including his frequent co-star, Kirk Douglas.  He wasn’t interested in sub-par work nor wasting time on the set.  As a producer, it was his money, but when he fired a director during production, that resulted in a shutdown and rewrites of the script.

Looking back on his films, Lancaster rarely gave a mediocre performance, in fact, there are performances that were muted to showcase another actor with a deeper role.  Specifically, Seven Days in May (Kirk Douglas), Separate Tables (David Niven), The Rainmaker (Katherine Hepburn), The Rose Tattoo (Anna Magnani), From Here to Eternity (everyone else in the cast), Come Back, Little Sheba (Shirley Booth).

Lancaster fell into the trap that other successful film stars struggled with.  He enjoyed the financial success and power that being a movie star brought, but he hated the public exposure it brought.  He prided himself in his acting, and success as a film producer.  He buried himself in roles that were not often commercial and he lost money on those films.  Decades later, some of those films are considered cinematic classics.  Lancaster knew he needed to feed the commercial side of his career, he liked money and his lifestyle, and production company overhead required it.  However, he was an actor first, and he used his star power undertake some fascinating character stories.