This band had an amazing run of success from the early 1970’s into the next decade, then almost disappeared, when one of the main songwriters left for a solo career.

The left behind a solid musical legacy of intelligent, thoughtful progressive music. Theron crowning achievement was Breakfast in America, an album ironically written by Englishmen.

Formed in 1969, Supertramp released their first album in 1970, Supertramp, Indelibly Stamped in 1971, and then produced their what would be the first album with their classic lineup, Crime of the Century, in 1974.  This lineup, consisted of Rick Davies, Roger Hodgson, John Anthony Halliwell, Dougie Thompson and Ben C. Benberg.

Supertramp writers Davies and Hodgson painted songs that could be constructed in the studio with dense instrumentation and production techniques, much like the Beatles and Pink Floyd did.  These were soundscapes that gave the listener a lot to process.

Crisis? What Crisis? followed in 1975.  This was a bit of a disappointment to me, it seemed to lack the ideas and presentation that made Crime of the Century so brilliant.  The album isn’t bad, just not in the same category as the album that came before, or after.  Hardcore fans can find nuggets of fine music on the album.

Even in the Quietest Moments followed two years later and was worth the wait.  For me, this is their finest album, even better than Breakfast in America. The album reached number 16 in the U.S. and re-established the band’s direction and success.  “Give a Little Bit” was the lead single, and while it is a fine song, there are even better ones.  “Babaji” was released overseas and is a fine song but not what I could think of as a hit single. This is not really a “singles” album, the shorter songs are quieter, reflective songs, and the longer ones are epic statements.  “Fool’s Overture” is a remarkable song, the best Supertramp song and one of the most intelligent songs ever written in the rock genre.  It is easily as impressive as the Beatles’ “A Day in the Life” as a song great than the sum of its parts.  Even in the Quietest Moments is as thoughtful as Dark Side of the Moon or Who’s Next or After the Gold Rush or Born to Run.

“History recalls how great the fall can be
While everybody’s sleeping, the boats put out to sea
Borne on the wings of time
It seemed the answers were so easy to find
‘Too late,’ the prophets (profits) cry
The island’s sinking, let’s take to the sky”

The first verse of “Fool’s Overture,” sets the stage for the song’s 11 minute walk down history, from Hodgson, who’s images are indelibly painted on this listener’s 20 year old mind. Is it wordy and pretentious? Or profound and poetic? The latter for me. Food for my intensifying imagination. 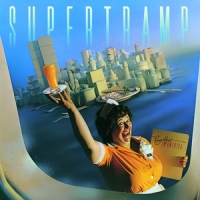 Breakfast in America was Supertramp’s pinnacle of success. Twenty million albums sold over 40 years, a number one chart position, and two Grammy Awards later, Supertramp toured the world for several years on the success.  “Take the Long Way Home,” “Goodbye Stranger” and “The Logical Song” were big hits around the world. “The Logical Song” was very autobiographical, Hodgson’s story of his own childhood and failings of his school experience.

The album took nearly a year to create, a dramatic tension between Davies and Hodgson, that tested and frayed their partnership. Like their other albums, this one was a wealth of musical ideas, the clash of history’s romanticism with today’s less-sweet reality.

In 1980, a live album of the Breakfast in America tour, Paris, was released to great success, a top ten chart position and Gold Record status.  A DVD of the concert and an expanded CD set were released in 2012.  There were legal issues surrounding the release of the DVD, issues involving the band members, the publishers representing Davies and Hodgson and the DVD producer.

The early 1980’s saw the band trying to recreate the success they had achieved in the late 1970’s but the resulting albums. Supertramp released their follow-up in 1982, …Famous Last Words, which provided two charting songs, but I found the quality to be much less than their previous albums.  Hodgson put out a solo album in 1984, and that paved way for the split between Hodgson and the rest of the band.  Brother Where You Bound and Free as a Bird followed, but were less inspired and less successful.

In the past 30 years, the band has gone on hiatus, regrouped with some new members, tours, and even an aborted reunion between Davis and Hodgson that didn’t work. Hodgson is still asked if Supertramp will reunite. “No, that ship has sailed,” he said in an interview last year with the Ottawa Citizen.

“Supertramp was a great adventure and a great legacy, but it’s kind of like asking your parents to get back together again and expect the magic to be there after they’ve been divorced for 40 years. It’s not realistic,” Hodgson said.

Roger Hodgson continues to tour and record, while Rick Davies battled some health issues.  Each toured in celebration of Supertramp’s 40 year anniversary and efforts for them to reunite for selected concerts, failed.

Supertramp is alive and well on classic rock radio stations. Hodgson’s 2019 European concert tour is drawing large crowds, five shows in Paris sold out, as are other locations.

Supertramp produced songs that literally wore-out the radio. On Spotify, the most played Supertramp songs come from Breakfast in America. The media might have changed, but Supertramp has an enduring popularity.

Still, many people consider the band an acquired taste, a bit too cerebral or progressive in sound, and I guess they were.  It’s what I loved about them.  When I think of the best music of the 1970’s, Supertramp is part of that discussion.