The drive-in theater is has been a dying business since the 1970s, driven out of business by high real estate costs, and the comforts and technology offered by traditional theaters. Dwindling, but not gone.

The last time I was at a drive-in was nearly 45 years ago, with some high school friends. I still remember the four films we saw: Butch Cassidy and the Sundance Kid, The Man Who Loved Cat Dancing, Cisco Pike and Chinatown. I think i got home about 4 o’clock in the morning as the horizon was pink and nighttime was going to bed.

I spent nine years living withing two blocks of our community’s drive-in theater.  At first, we lived on the south side of the theater lot.  As a kid, I saw more movies at the drive-in than at the downtown theaters.  In the summertime, once in awhile, the family would pile in the car and go to travel up the street to the highway, turn left and drive the half block to the drive-in entrance.  No matter how many times we went to the drive-in, I was still excited when we drove through the entrance, paid the admission and found a place to park.  I remember the thrill just thinking about it.

Depending on what time we arrived, the music might be on, coming through the speaker you attached to your roll-down window.  In those days, you did not sit in your car with the air conditioner on or get your sound from the car radio.  The speaker hung on the inside of the driver’s window and the sound quality was fair at best, but you weren’t as focused on the sound as the picture.

If you got there early enough, you might get to play on the swings and other play equipment for kids, located near the big screen where your parents could keep an eye on you.  Back in the 1950s and 1960s, kids played on equipment that would be outlawed today.  If you fell and got hurt or cut yourself on the metal slide, tough luck.  It was at your own risk.  Parents enjoyed having the kids out from under foot, and expending your energy, so maybe by the second feature they were asleep.

Every so often, the drive-in tried theme nights, like the “Battle of the Bands” for local rock and roll groups to attract teenagers.  I was not a teenager so I never witnessed the decline of civilization that happened on those nights.  I do recall that we talked my mother into taking us to the drive-in to see a rock and roll double-feature.  Herman’s Hermits were in Hold On, and Sonny and Cher in Good Times. Both, cinema classics.  The director of Good Times? William Friedkin. That name should be familiar, he went on to direct The Exorcist and The French Connection.  Sonny Bono was not in either of those films, but he did end up in Congress.  Who says that rock and roll won’t lead to something productive?

The drive-in was where I saw current films of the day, rather than at the indoor theater.  As we waited for night to fall, and hopefully for the temperature to drop, music started to come through the speaker, and for advertisements to show up on the big screen.  These were usually ads for concessions, warnings about driving off with a speaker attached to your car window, and how to safely exit from the property.  Once in awhile, you saw ads from local businesses.  The drive-in had a bit of a carnival atmosphere, people walking about, kids misbehaving, teenagers on dates, and fathers trying to get everyone seated in the vehicle.  This was before the proliferation of pickup trucks and SUVs.  Most people had sedans or station wagons, only a few vehicles were backed-in, so trying to get a good sight-line from the backseat was challenging.

One of the most memorable things about the drive-in was the intermission, the time between films when people went to the bathroom and to the concession stand, usually in that order.  The screen was not dark, as there were advertisements and a countdown by minute (or somewhat close), leading up the previews and the next feature.  I always looked forward to the intermission and the countdown.  You saw ads like below.

Our drive-in opened in 1953 and the city was growing up around it.  Originally, the screen was constructed out of inch thick wood sections.  Normally, this was good, solid material unless high winds push it over, which did happen.  Living close by, my friends and I appropriated sections of the wood that were stacked to the side of the new metal screen.  These 4 x 6 panels were easily assembled into our triple-decker clubhouse.

A few years later, my family moved, we bought a house on the north side of the theater, directly across the highway. I could look out my bedroom window to the drive-in screen.  If you stood at our property line, late at night, you could pick up pieces of the sound.  Occasionally, I would walk across the highway and visit the concession stand.  I saw many films that I would never have been allowed to see.  Surprisingly, the theater had no issues showing R and X rated films.  Apparently, there were no complaints.  None from me.

The drive-in theater dates from as early as 1915 (obviously before sound), but the peak arrived after WWII when car ownership increased and theater owners combated the rise of television, to get people off the sofa and into a theater.  The peak period was the late 1950s and early 1960s with over 4,000 drive-in theaters across America. 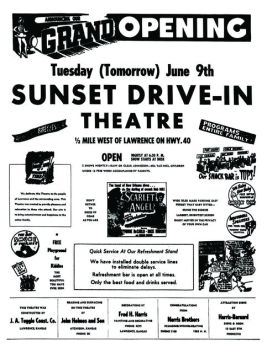 The drive-in industry shrank to a few hundred in the 1990s, but held steady.  Owners used their properties for flea markets, Sunday services and other creative uses to stay in business.  Land was sold off for development, as what happened to the Sunset Drive-In Theater.  In the 2000s, many independent theaters, including drive-ins, went out of business because movie studios required the conversion to digital projection equipment, costing tens of thousands of dollars.  Still, the number of drive-in theaters is now estimated at over 300, a bump, showing that the owners of drive-ins are creative with their business plans, minimizing fixed costs and marketing to a nostalgic crowd.  Drive-ins are a niche market, in an entertainment market feeling the pinch from streaming and boutique theaters.

Below is a great little feature on drive-in theaters.

Movies under the stars, the original concept of the drive-in theater, continues even after many theaters have closed.  Movies in the park or on outside walls is a popular way of attracting summer crowds to downtown and public areas.  In the era of the Coronavirus, attending a movie in your car is the ultimate social distancing, so long as the people in your car are part of your stay-at-home crew.