Everyone has heard and likely owned this album. Twenty-six million copies sold in the U.S. alone.  Go ahead, check your record collection, I’ll wait.

I have reviewed several other Eagles albums, but bypassed this one.  Honestly, I was not sure what I could say that was new or original about the album.  Then I noticed a copy of the remastered album at the library, and saw that it includes a concert disc from just prior from the album’s release.  At one point, Glenn Frey announces that they are playing a few songs no one had heard, yet.  This concert disc, by itself, is worth the price of buying the remaster edition.  More on that, later.

Hotel California was the first album for Joe Walsh and the last for Randy Meisner. How do you describe this album. It rocked harder, lost the country groove and was really a Henley/Frey production. The Eagles were no longer attempted to be a democracy, which is interesting because new member Joe Walsh was more famous than anyone else in the band. Landing him have them panache, plus more musical credibility and versatility. Walsh was a solid writer with many of solo and group hits. He was a much better writer than Bernie Leadon and knew his way around keyboard instruments.

Besides the sophisticated orchestral arrangements on “Wasted Time” and “The Last Resort”, the instrumentation is electric and it sizzles. The lead guitar work of Felder and Walsh is superb, melodic but muscular. Even on a song like “New Kid in Town” or “Try and Live Again” the guitars ring, like you are listening to George Harrison’s guitar in 1965. Gorgeous.

I do not know if Henley and Frey set out with a grand vision, more than they had with other albums. Certainly the lyrics to the songs they wrote related thematically, once they had “Hotel California” written. As rock stars in the early 1970s, they saw and lived the life they wrote about, and were smart enough to see beyond it.

There is almost a reverence to this album, when you play it, you should listen quietly out of respect.  I am being mostly sarcastic.  Of course you want to appreciate the fine musicianship and hear the cultural references in the lyrics, but it is almost like soaking up a religious experience, classic rock style.  There are a number of standout tracks that you can listen to individually, but letting the album play from beginning to end is how albums like this should be fully appreciated.

This song embodied the entire concept of the album.  You can check in, but you can never leave.  The song rose to number one and won the Grammy for Record of the Year.  According to various accounts from the recording history, the song was recorded in various versions, none of which Henley and Frey accepted.  The final version was edited from the different versions.  The song is famous for the several minute guitar solos by Felder and Walsh to end the song.

Henley and Frey’s lyrics have been discussed and various meanings projected on what their images represent.  The song is a quite an allegory of life in California and the 1970s. Glitz, relationships, drugs, the myth of the California lifestyle, plastic people. 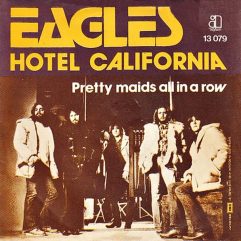 The first single from the album, number one on the charts and a Grammy Award for best vocal work.  J.D. Souther originally wrote part of the song, and it was finished collaboratively with Henley and Frey.  It is a very grand song, nicely played, a Mexican vibe to the song.  Interestingly, guitar player Joe Walsh was used on piano and organ instead of guitars, which Don Felder handled.  Through the years, one of my least liked Eagles songs.  Too much polish and pretense for me.

According to Souther, the song referenced the quick changing of the guard in the music biz.  You are hot today and someone replaces you tomorrow. 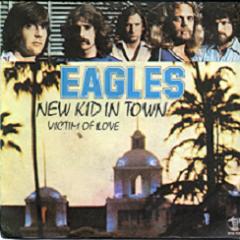 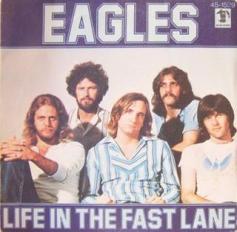 The third single, this one just missed the top ten. It began with a tasty guitar riff that Walsh would play during warm up, he was told to hang onto it for a later song. Henley and Frey came up the lyrics of a fast, plastic and slightly dangerous lifestyle.

He was a hard-headed man he was brutally handsome
and she was terminally pretty
she held him up and he held for ransom
in the heart of the cold, cold city
he had a nasty reputation as a cruel dude
they said he was ruthless said he was crude
they had one thing in common, they were good in bed

Life moves on, and we wonder, what did we leave behind, and what did it mean? Another reflective, rear view mirror song.  A bluesy ballad (L.A. style), Frey on piano, Walsh on organ, Felder on guitar, and strings courtesy of Jim Ed Norman.

“Victim of Love”   Henley/Frey/Felder/Souther   Henley 4:11  A harder-edged, courtesy of Felder’s tough lead guitar, slide guitar by Walsh.  The finished instrumental track was played live in the studio, just the five guys.  The vocals were to be recorded later.  According to Felder, he was promised the lead vocals, each guy was supposed to get a lead, like in the old days.  Henley recorded a guide vocal and it was decided that he would sing the lead, much to Felder’s disappointment.  One of the finest songs, not to preachy or overblown arrangement.

What kind of love have you got?
You should be home but you’re not.
A room full of noise and dangerous boys
Still make you thirsty and hot.
I heard about you and that man.
There’s just one thing I don’t understand.
You say he’s a liar and he put out your fire,
How come you still got his gun in your hand?

“Pretty Maids All in a Row” Walsh/Joe Vitale   Joe Walsh   4:05 A ballad, not the type of song I would expected Walsh to unwind from his songwriting catalogue for this album. Sure, he’s written ballads, but he was recruited for the Eagles for his muscular side of his talent.  Piano and synth by Walsh.  A wishful and pretty song.

“Try and Love Again” Randy Meisner   Randy Meisner  5:10 Probably the most Eagles-type song on the album, from Meisner, who was being isolated and would soon leave the band. It has the great harmonies and the easy-going vibe of past songs, a combination of acoustic and electric guitars. A rare lead guitar solo by Frey.  In a way, it’s a counterpoint to the jaded perspective of Henley/Frey. It was Meisner’s lone contribution to the songwriting. This is my favorite track on the album.

Some rich man came and raped the land, nobody caught ’em,
Put up a bunch of ugly boxes and, Jesus, people bought ’em
And they called it paradise, the place to be,
They watched the hazy sun sinking in the sea
You can leave it all behind and sail to Lahaina
Just like the missionaries did so many years ago
They even brought a neon sign ‘Jesus is Coming’,
Brought the white man’s burden down, brought the white man’s reign
Who will provide the grand design, what is yours and what is mine?
‘Cause there is no more new frontier, we have got to make it here
We satisfy our endless needs and justify our bloody deeds
In the name of destiny and in the name of God 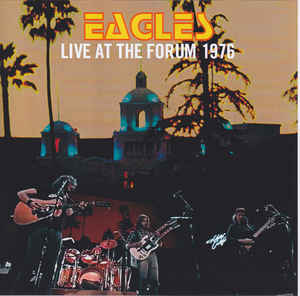 Disc 2  L.A. Forum  October 20-22, 1976  The Eagles toured most of the year when they weren’t recording Hotel California.  After the release of the album, they would stay on the road for most of the next two years.  The L.A. Forum concerts covered a lot more material than was released on this concert disc, including a few more Joe Walsh songs.  This tour captured the band during their best period, with Meisner and Felder still in the band, and Walsh adding a new gear to the band.  The guitar work captured on concert is superb, with keyboards added by Frey and Walsh. The performances are close to the recorded versions but are looser and the guitars are more raw and less polished.  Below is the song list from one of the L.A. concerts.

The concert disc My only complaint is they did not release more of the concert, since there was 20 minutes of disc space available.