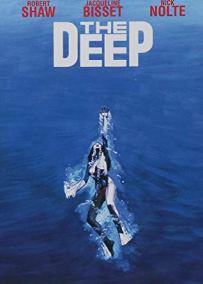 The Deep arrived two years after Jaws. It was Peter Bentley’s next book, and ripe for another ocean thriller.  The Deep was naturally met with great anticipation.  It ended up making money, not Jaws-type money, but a hefty profit.

The critics however mostly dismissed the film. Living up to a giant shark isn’t easy.

I recall going to see The Deep with great anticipation.  It was very enjoyable summer fare and something I looked forward to all week.  I found it more mystery than Jaws, but lacked “the bite” of that experience.

Jaws is still hard for me to watch, but The Deep I find more sedate viewing. The underwater diving sequences are wonderful. No, I’m not talking about Jacqueline Bisset’s wet t-shirt (no, I’m not going to show it).

The underwater scenes in the Bahamas pack tension and mystery, and the viewer is placed right in the action.  Aside from sharks, the action includes various elements of danger from hungry eels, and evil humans after morphine.

Jaws alumni Robert Shaw plays Treece, an expert on undersea treasure and wrecks, who also tends the local lighthouse. He is leery of tourists who think they’ve found the next Spanish treasure. Nick Nolte and Bisset play lovers on holiday, David and Gail, who find a medallion and an ampule of morphine. This sets off the adventure.

Shaw was at the height of his film popularity, he was enjoying a great decade after some questionable choices, following the big hit, A Man For All Season’s (1966).

Shaw plays characters who you never quite know if they are on your side or will double-cross you. Treece is that character, helpful, but is he really in it for himself?  That keeps you guessing throughout the film.

David and Gail were diving an area that was off-limits when they found the ampule and medallion. Word quickly gets around about their discovery.  A Haitian (Louis Gossett, Jr.) and his friends attempt to intimidate David and Gail into giving up the ampule and leaving the island. They refuse, and quickly find themselves in over their heads.

First, they are nearly run-over while on scooters, and are then manhandled.  Gail is forced to strip while David is held at knife-point.  Later on, Gail is assaulted in her room by voodoo mask-wearing friends of the Haitian.

In the meantime, Treece takes up their case and goes diving with them back to the wreck where they find more ampules and other Spanish trinkets.  This sets Treece and the Haitian on a collision course.

The cautious Treece rigs the wreck with explosives to keep the Haitian away.  He then makes a deal with the Haitian to retrieve the ampules in exchange for a million dollars. The Haitian wants the morphine to turn into heroine.  This “deal” gives them time to harvest the ampules, but also to explore the wreck for more Spanish treasure.

The ampules are the result of an American ship lost in 1942 that contained medical supplies in addition to munitions. The Spanish trinkets are thought to be from a ship lost much earlier, going down in the same location as the munitions ship.

Their diving to the wreck creates danger as the unstable ship shifts, sending David under the wreck where he finds more Spanish trinkets; more clues.

They also retrieve a few thousand ampules and put them in the lighthouse atop Treece’s house, rigged with explosives.

Now, the mystery of the trinkets becomes more clear, sort of.  They suspect these items were part of a cargo on a ship that had no business for being were it was when it went down.

Meanwhile, the Haitian turns one of Treece’s crew, Adam, against him.  The Haitian plies him with liquor and questions about what Treece is really doing underwater with David and Gail. 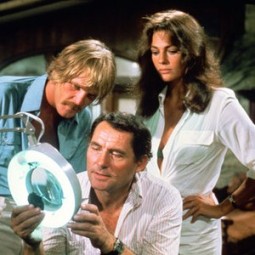 Gail discovers the secret of the treasure; lust between the King of Spain and the noblewoman he wants. Clandestinely, the jewels were put on a French tobacco ship from the New World to win her heart and body, but the ship vanished in a storm and was the loss went unreported. Confusing romantic subterfuge.

The key is to find something from the ship’s manifest; this would establish providence. So they dive, but meet up with the Haitian, who throw chum in the water to attract sharks, under the eye of Adam.  Creating a cloud in the water from their dredger, they are able to escape the sharks.

David figures out the medallion they found has a picture of a woman wearing a medallion, but only the chain is visible because of the corrosion on the metal.  David saw such a chain underwater. He thinks it might have a dragon attached to it, which is in the manifest.

Meanwhile, Adam helps the Haitian by bringing in one of his men undercover, as Treece and the others are in his house working on the treasure mystery.  The man kills one of Treece’s colleagues.

Disgusted, Treece is ready to abandon the effort and blow up the wreck, ending the story. After Treece and others leave, Adam goes up to the lighthouse to get the drugs for the Haitian. The lighthouse explodes. Treece and David go to the wreck, where Treece plants the explosives, and so David can look for the dragon necklace.

The Haitian and his men also dive. David finds the dragon, as the Haitian’s men arrive, but he has to drop it. Gail fights one of the men on the boat and is able stab him with a spear. David escapes his pursuer by tricking him, then is able to cut off his air, suffocating him.

Treece, who is freed by David, cuts David’s air hose to force him to the surface before the explosion. David gets to the surface but Treece is nowhere to be found. The explosion sends the wreck off the reef to the bottom of the ocean.

Treece surfaces with the dragon. Freeze frame, the end.

The Deep is beautifully photographed, it great to look at, although it does not focus much on the island’s charm.  This isn’t a travelogue.

The menancing tone of Jaws is absent from this film.  The Deep isn’t a horror film.  This film was made for a general audience so the violence is more threatened, instead of shown, and contains little of the cinematic gruesomeness Spielberg used so effectively to create terror.

The idea for Bisset’s wet t-shirt in the opening sequence was about film marketing; her nipples added to the box office receipts. Producer Peter Guber said that decision made him a fortune.  Speaking of Bisset, Nolte said in his autobiography that the two of them had an affair while on location, in the absence of her boyfriend. Curiously, I never really felt they had much on-screen chemistry.  They were two beautiful people who filled the marquee but didn’t seem right for each other on screen.  Apparently, not in real life either.

The film was directed by Peter Yates (Bullitt, Breaking Away, Eyewitness). Even with the negative film reviews, Yates’ career kept going strong. Despite his success with action films, Yates was strongest in character-driven stories, like Breaking Away.

Nolte’s career was red-hot, but his upcoming choices were uneven, interesting roles at best. 48 Hrs. (1982) would correct his career trajectory.

Bisset would continue on in high profile films until her career cooled in the next decade. She entered an age that proved challenging for actresses, but she worked steadily in secondary and character roles.

The legacy of The Deep? It falls short of being a classic, but it is a competent film that entertains, with or without a wet t-shirt.