Lee Marvin is Walker, who tries to unravel past events, he was shot on Alcatraz and left for dead. Walker’s partner, in crime, Reese (John Vernon), took the money and his wife. Walker recovers and goes looking for his money.

Walker goes about it methodically but with vengeance. He finds his wife, who Reese has already abandons. His wife takes her own life. Reese follows the leads, inflicting damage wherever needed. Next he goes to Chris Angie Dickinson), his sister-in-law, who was also involved with Reese.

Reese was gotten himself involved with organized crime and turns to them for help with Walker. Reese took Walker’s money to buy back into the crime organization.

Chris acts as the go-between, for Walker to get to Reese, offering herself up so Walker can sneak into his apartment. Reese goes from making love to Chris to being tossed over the ledge and falling naked to his death.

Walker begins working his way up the organization looking for someone (Carter) to Pat Reese’s debt. They end up dead, shot by the organization. Walker gets friendly with Chris in a weird love/hate relationship.

Brewster is the next man up, which Walker goes to see. Brewster refuses to pay and places a phone call to Brewster’s boss who won’t pay up.

Brewster talks Walker into going back to San Francisco to collect a drop where he can get his money. At the drop, Brewster is killed by Fairfax, his boss. He tells Walker to come and collect his money, but Walker fades into the shadow, a rather ambiguous ending. The film keeps cutting back to Walker getting shot at Alcatraz from the beginning of the film. Critics and fans have wondered if the entire film is a dream and Walker really died on Alcatraz.

Directed with style by John Boorman (Hell in the Pacific, Deliverance, Hope and Glory).  Boorman wastes no time or film, and it is a brilliant job editing this bizarre story.

Later, this film was remade as Payback, starring Mel Gibson and directed by Brian Helgeland.

Adapted from a Hemingway story, first made in 1946 starring Burt Lancaster.

Directed by Don Siegel, it co-starred Ronald Reagan in his last film. Angie Dickinson and John Cassavettes co-star. Intended as a made for television film, it was released theatrically instead, due to the violence content.

Two sadistic killers (Lee Marvin, Clu Gulager) pull off a hit on a teacher (Johnny) in a school, who offers no resistance, and this gets the hitmen wondering what they are involved in. The hitmen wear suits and carry a briefcase, hardly your typical thugs.

The story flashes back to the Johnny (Cassavettes) they killed and his life as a race car driver. He subsequently gets involved with a woman (Dickinson) Sheila who is also involved with a criminal.

Johnny’s luck turns bad and he’s injured in a mishap which ends his career. He knows about the other guy.

Reagan plays the crime boss, Browning, whose method of motivation is to severely beat Sheila. This is a different kind of character for Reagan, who would move on to the more lucrative world of politics.

The hit men talk to other people who knew Johnny, learning more about what he was involved in and the crime boss.

Johnny is working the low scale of racing when Sheila finds him. Sheila suggests he could earn big money being a driver in a mail truck hold up. It’s a setup, he’s a patsy.

The robbery is seen in a flashback, from the planning to the execution. Afterward, Johnny gets away with the money from the robbery.

Browning is now a respectable developer and pleads ignorance of that past event. The hit men visit Sheila and help her remember by dangling her from a building.

It turns out that Johnny took the getaway money to Sheila, with Browning there, and who shoots him. Johnny gets away. Sheila and Browning are really married, and it was Sheila who put the hit on The race car driver.

The hit men take Sheila to see Browning but he ambushes and kills one of the hit men (Gulager) and wounds the other (Marvin). Sheila escapes, returning home to flee with Browning.

Marvin’s character arrives, kills Browning, then kills Sheila, before dying from his wound.

Easy to see why Reagan’s acting career was over. He’s stiff as a board and no variation on his one-note performance. Cassavettes has the look of a hungry, passionate actor, his film career was taking off. The supporting cast is very good, polished character actors.

Marvin made this film before Cat Ballou, releases the next year, which won him the Academy Award for Best Actor, and forever changed his career.

It was Marvin who suggested the story for Point Blank, and by this time, Marvin was now a heavy player, getting approval for director, cast and final cut. The film was not a big success upon release but its reputation has grown to cult status.

Point Blank was released the same year as Bonnie and Clyde, a more visually violent film, but not as grim in mood. It’s hard to develop any empathy for Marvin’s character, unlike Bonnie and Clyde. The same can be true of the characters in The Killers, which can at least partially explain the lack of commercial success for either film.

The Killers was like the gangster films of the 1930s, unsympathetic but quirky characters, imaginative dialogue and justice in the end. 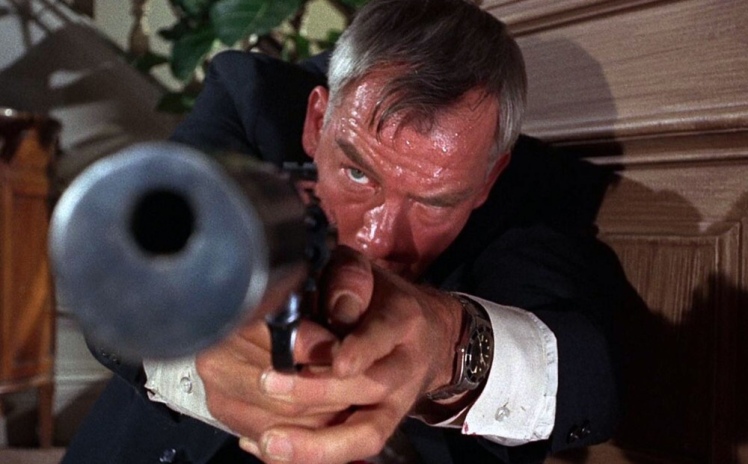