The first really warm day of the spring, pushed 90 degrees. Sitting on the front porch swing, my favorite spot, I thought about the days when air conditioning was a luxury. 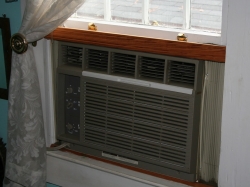 In my family, cold air first came to my Grandparents Miller’s house. It was a big deal when they put a box-sized unit in the living room wall next to the front door. It cooled that room and a little bit filtered into the bedrooms. Sometimes at night, they slept with the windows open; small town life was like that in the early 1960’s.

Later, they got an air conditioner for the bedroom window. That was sleeping in pure comfort.

Back then, we seemed more tolerant of the heat. I still like the feel of summer heat, except when I’m trying to sleep. 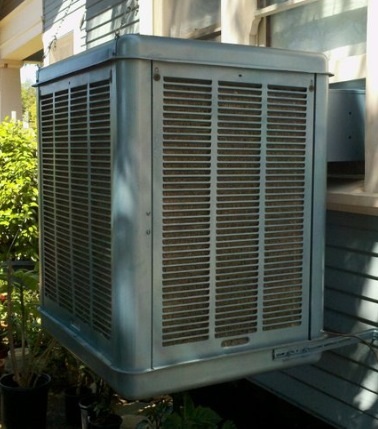 My other grandparents used what was fashionably known as a water cooler. Water from the outside faucet ran into a contraption that seemed to chill by taking the heat from the air and blowing it into the house.  Evaporative cooling it was called.  It sort of worked but everything seemed limp and soggy.  It was also called a “swamp cooler.” The technology has evolved in six decades but this type of cooling unit is still used.

At some point, all of my grandparents  slept with the windows open and I recall the night sounds. Trains in the distance that would actually come with a couple of hundred yards of the house. The Katy Line was one of the railroads serving the area. Those days are long gone like the ten cent candy bar.

You could hear the crickets and other night life, and occasionally sounds from the refinery down the street. Some years ago, the refinery flooded because of long periods of rain, floating crude and refined fuels through several miles of residential and commercial properties. Entire blocks of houses, including my grandparents’ old house were condemned and torn down. A few structures were moved to new locations.  The area is a ghost town now.  A couple of years ago I drove through the neighborhood and it was like a bomb went off and vaporized everything including trees and concrete. The refinery security chased me away, like I had wondered into Area 51.

Automobiles weren’t much better. Again, my Grandparents Miller were the first to have a car with air conditioning, it was a unit that sat below the dashboard in the middle. When we all piled into the car for a drive, I sat up front between my grandpa and my dad, the cold air blowing right in my face. Simpler times, simpler fascinations.

In my family, we didn’t get car air conditioning for a few years. We used the 4-70 method. Four windows down and drive 70 miles per hour. It was like being in a wind tunnel, the rush of air sucked everything out that wasn’t held down. Summer trips were always sticky and uncomfortable.

In the late 1960’s we finally got a window air conditioner for the house. In summer, I recall after coming in from whatever adventure my friends and I had going on, I had to take a bath, and afterward the sting of the cold air in the living room was heavenly. The bite of the cold air found any residual moisture on your skin and in your hair. The only thing that ever came close to that was during the summer, entering a store or restaurant, and feeling your skin tighten-up from the rush of cold. There is something exhilarating about that sudden change of temperature and the memory of where I was at the time.

One summer our air conditioner stopped working August, during a period of daily temperatures over 100 degrees.  It was several days before a new unit could be installed and camping out at my parents was needed.

We take air conditioning for granted. My schools didn’t have air conditioning, thankfully college did. May was an uncomfortable time, as was late August. Somehow we survived. I couldn’t now under those same conditions.