stand in a courtroom. Paul Newman, Robert Redford, Warren Beatty all took turns playing stoic, sometimes impassioned figures, good men against dark forces. For almost four decades, Tom Hanks has graced the big screen playing a variety of wacky, earnest, dependable, somewhat naïve, usually nice guys. Once in awhile he would take a detour to play a killer, globe-trekking professor of symbology or a doomed Wall Street investor, but most of the time he inhabited roles that we understood and rooted for to succeed. Forrest Gump was even a role we understood because he took us inside his heart. Twice Hanks has been presented with Oscars for his performances, and frankly, his collection should one or two more statues. He even has lifetime achievement awards – and he’s still working!

Watching Hanks in his new film, Bridge of Spies, he gives another one of his thoughtful, full-bodied performances, very much inhabiting the 1950s lawyer James Donovan. At 59, Hanks is mature and knows a thing or two about acting. He’s been at this a long time and for at least two decades he has the advantage of working with A List writers and directors. He has it made, but rather than coasting on his success, he continues to undertake physically demanding roles (Captain Phillips) and characters that must be believable (Walt Disney) for the film to succeed.

Like any successful actor, Hanks formed his own production company (Playtone) to produce his film and television projects, and has stepped into the director’s chair for a few projects including That Thing You Do! and Larry Crowne. Hanks was writer/producer/director/actor/songwriter for That Think You Do! a small film that had great charm and 1960s realism. Larry Crowne was a big film with big aspirations but was generally panned. I was greatly disappointed with it at first. The secret to this film was giving it some distance and a second chance. Larry Crowne is a delightful little film with many wonderful characters and a great message on reinventing yourself.

Tom Hanks looks like the guy next door, in fact he was in The ‘Burbs. Well-intended, but sometimes outwitted by house renovations, animals or mermaids, Hanks can also play self-absorbed advertising directors, partners of Sgt. Joe Friday, record company A&R reps, hypochondriacs, or bachelor party organizers. He’s even been known to dress as a woman to score a great room in a hotel. Nobody’s perfect and Hanks would admit to being as human as anyone, unless he is playing a toy cowboy named Woody. Hanks’ first decade or so of film work is a patchwork quilt of comedies, dramas and a few misfires. His career was “saved” by Penny Marshall who cast him as the manager in “A League of Their Own.” Nice save.

Movies are all about heroes and dramatic endings. When we need heroes and good guys we invent them including Gene Autry, Roy Rogers, Douglas Fairbanks, John Wayne, Clint Eastwood, Harrison Ford, Sylvester Stallone, Arnold Swartzenegger, Dwayne “the Rock” Johnson, and so on. Heroes are not always larger than life characters, but people who stand up to larger than life challenges. Jimmy Stewart, Gary Cooper, Gregory Peck are like statues in Monument Valley, monumental pillars of virtue and defenders of what we hold dear as Americans. Add Tom Hanks to that list. Whether he is Jim Lovell, Capt. Phillips, Charlie Wilson, Capt. Miller, Paul Edgecomb or Sully Sullenberger, he is the guy you want in the clutch or with lives o 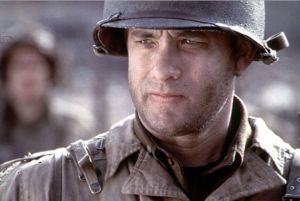 n the line, not because he is a super hero, just a scared guy who steps beyond his fear. Hanks is quoted as saying, “A hero is somebody who voluntarily walks into the unknown.” When I walk into the dark of the theater I’m ready for the unknown, but what I do know, is that Tom Hanks will give me a great performance and take me deep into the heart of the story. As Woody would say, “Reach for the sky!”