The Doobie Brothers began as a hard-rocking band with a tough motorcycle and longhair image. Named after a marijuana joint, the band is now as American as baseball (not the steroid era) and apple pie (do not think of the American Pie film).

The first chapter of the band cranked out radio-friendly guitar riff songs like “Rockin’ Down the Highway” and “China Grove”. Peter Frampton even wrote a song called “Doobie Wah”.  In 1975, co-leader and songwriter Tom Johnston was forced to withdraw from the band. That departure changed the fortunes of the band as Michael McDonald and Jeff Baxter (Steely Dan sidemen) came aboard and the style of their music picked up a more intricate, R&B flavor. The next series of albums sold millions with a steady supply of chart hits.

The tough guitar sound was replaced by more soulful keyboard influenced songs. The Doobie Brothers were seen on the golf course and wrote songs with Paul Anka. The band sort of imploded, and would be inactive for the next six years. Then, original members Pat Simmons and Tom Johnston reformed the band with some of the classic lineup, and returned the band back to the early 1970s sound. The Doobies have continued to sporadically record while touring regularly. The band is now centered around Simmons, Johnston and longtime guitarist John McFee. Their live show incorporates songs from their various periods but is truthful to the original sound of the early days. In 2018, the Doobies and Steely Dan are touring together.

Everyone has their favorite Doobie Brothers songs, usually from a certain period of their life. Their songs are crafted for a road trip toward an adventure, or to rock down the highway. If I were going to gather songs for a CD for the road, here would be my selections. I haven’t included every chart hit and included several album cuts.

“Listen to the Music” – The first single from their second album Toulouse Street. The Doobies knew how to write a hit, this song was all over the radio. For a long-haired, biker 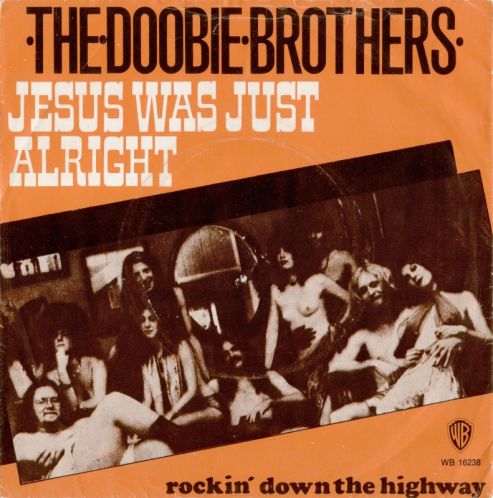 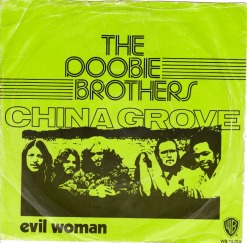 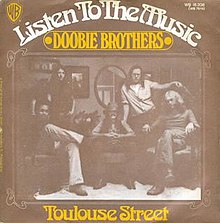 band, this song was highly polished and begs you to sing along. This song showed the band could rock but appeal to a wider audience without compromising their spirit. Credit producer Ted Templeman with rounding their edges enough but not too much.

“Jesus is Just Alright” – The second single to hit the charts, the follow-up to “Listen to the Music”.  The song is tough and driving, it established Simmons and Johnston as skilled players, and the group delivering tight vocal harmonies.

“Rockin’ Down the Highway” – This is pure Doobie Brothers, it is what they are about. A song with great radio appeal, good, but not great.  Although not released as a single, this song is well-known. Another solid number from the second album.

“Long Train Runnin” – The first single from the third album, The Captain and Me.  A hard-rocking tune written by Tom Johnston.

“China Grove” – The perfect Doobie Brothers song. The opening guitar riff defined the Doobie Sound. Often imitated and celebrated (Frampton), but these guys took the Rolling Stones’ gift of a riff, and doing one better. This song proved not only they would write catchy songs but they were tight in their arrangement. This is perhaps their best song of the early years.

“Another Park, Another Sunday” – A very radio-friendly song, one might think this was a song from the group Chicago, instead of the Doobies.  The song reached the Top 40 but was less than a monster hit.  Nice harmonies and smooth production, the first single from What Were Once Vices Are Now Habits.

“Eyes of Silver” – A lighter version of “China Grove”, does not contain the originality but continues the Doobies writing great guitar riff songs.  This song was easily overshadowed by “Black Water”, the third single from What Were Once Vices Are Now Habits, and their first Number One record.

“I Cheat the Hangman” – From the album Stampede; it was the third single, written by Pat Simmons.  A haunting song, not your typical Doobie Brothers song. The production is topnotch, as one expected from producer Ted Templeman. The song builds to a busy orchestral ending.

“Music Man” – Another song from Stampede, not one of their singles.  An up-tempo song, written by Tom Johnston, that reaches take-off. Horns and strings add great texture to this song. Ted Templeton took some chances with this album and it pays off. A neglected album from the catalog.

“Wheels of Fortune” – A serious rocking song, great harmonies and the inclusion of horns. Written by Simmons, drummer John Hartman and new member Jeff “Skunk” Baxter, it was clear that this wasn’t your father’s Doobie Brothers now. The guitars were pulled back and used selectively in the arrangement. The first single from Takin’ It to the Streets.

“Takin’ It To the Streets” – The title track from the same album. This marked a sudden turn for the group, from driving rock to a more subtle soul vibe. Michael McDonald had a huge impact on this album and the direction of the music. The song arrangements were more sophisticated and radio ate it up.

“For Someone Special” – The odd Tiran Porter (bass player) penned song, and a gem at that. Also from Takin’ It to the Streets. He has a low, limited vocal range but he hits the right emotion on this song. It is soulful and builds to a satisfying ending.

“What a Fool Believes” – The biggest song from Minute By Minute, a Number One chart-topper, it won Song of the Year and Record of the Year Grammy Awards.  It is a fine song although not one of my favorites.  By this time the Doobie Brother sound had changed so much from the early days that I was not interested in band.

“Dependin’ On You” – From the Minute By Minute album, a huge success spawning several singles. The songwriting was shared for this album, a change from the days of almost all Simmons and Johnston tunes. This song has a complex structure and arrangement, almost a Steely Dan vibe.

In 1980, the Doobie Brothers released their final studio album, One Step Closer. It was one step closer to the end. I found this album to be a huge disappointment, apparently many other people thought so too, including some of the Doobies. The band broke up after that.  They toured and released a farewell album.

“The Doctor” – The first singled from the reformed Doobie Brothers in the late 1980s. This song was more driving and straightforward, much like their early days. However, the group did not forget some of the touches that provided them great success in the late 1970s and early 1980s.  The album Cycles, was released in 1989 on Capitol Records.  In a sense, the Doobie Brothers were starting over.

“Dangerous” – From their second album Brotherhood, following their reformation. In the same vein as “The Doctor”, this new song rocked down the highway in overdrive. The album was deemed a failure from critics and the public and it would be almost a decade before they released another album of new songs, on a smaller label.

This is not exactly a greatest hits collection as a few bigger songs are missing.  I was tempted to pull more songs from The Captain and Me and What Were Once Vices Are Now Habits, which has a number of guitar tracks perfect for a Sunday drive in the country.  Instead of streaming, put a CD in the player and let’s rock down the highway.