Dabney Coleman is one of my favorite actors. He’s not a big star but his acting is always intriguing to watch. Why? Well, he can play about anything and be believable doing it. He also has an extra gear as an actor, he can convey more than one thing at the same time, which is unique, and he does it with such ease that you don’t even know he’s doing it.

Dabney Coleman has spent most of his career as a character actor. His name is not always recognizable but his face certainly is.  Tune in many television shows or films during the 1970s and you’ll see him in a scene or two, but he was a presence. It wasn’t until the late 1970s that his roles grew in significance, which led to several starring roles in both television and film. He was in his late forties at the time, middle age, an unlikely time to suddenly became a leading man.  And even when he hit it big, he continued to veer towards smarmy, egotistical characters, who were fun to watch, but didn’t often engender much empathy.

A series of film roles beginning with North Dallas Forty (1979), 9 to 5 (1980), One Golden Pond (1981), Tootsie (1982) and WarGames (1983) led to his first television series Buffalo Bill (1983-1984). The series cast Coleman as an egocentric local talk show host who would say and do about anything.   Bill wasn’t really a likable character and the show ranked low in the ratings even though it had both good writing talent and casting.  Coleman tried to make the character deliciously bad but also show a few redeeming streaks but the audience just didn’t embrace the show.  As an actor, the show provided Coleman a broader canvass and show that he was much more than a supporting character.

Coleman continued to enjoy  success in a string of films like a starring role in Cloak & Dagger (1984), and key roles in The Man with One Red Shoe (1985) and Dragnet (1987). None of these films were big hits but proved that Coleman could not only act but had screen presence.

In 1987, Coleman starred in another television series, Slap Maxwell, a variation of his Buffalo Bill character.  Again, good writing and cast, but the audience failed to watch.

Returning to films, Coleman scored a major role in Where the Heart Is (1990), and a starring role in Short Time (1990). Short Time has Coleman as police detective on the verge of retirement who finds out he is about to die of an illness. To make sure his family is well off, he intends to die in a service-related death, so they will benefit from the in the line-of-service death benefits. Despite his best efforts, he cannot even manage to kill himself as he attempts to bring in an elusive criminal. In the end, he finds out the medical information was incorrect and is reunited with his estranged wife to gains back his family.  Coleman is very effective in this role, combining the right amount of silliness with humanity. 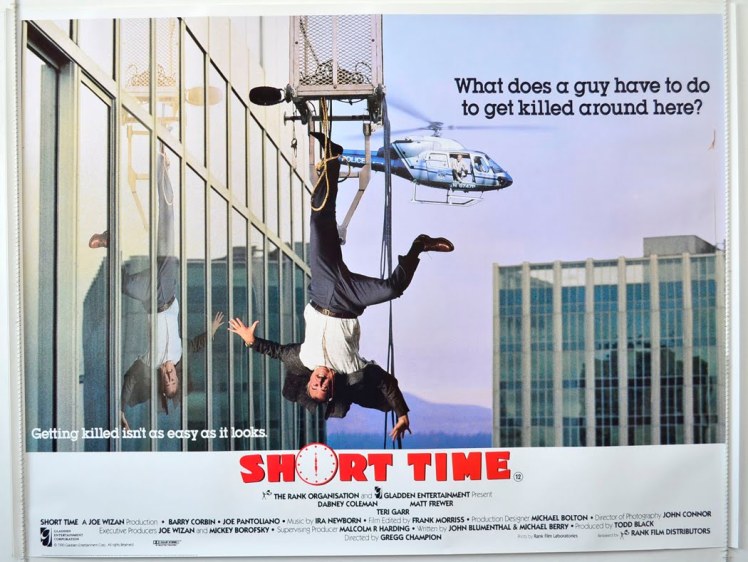 While he scored other significant roles in films, he wasn’t able to remain a leading man, maybe in part because he was pushing 60 years of age. Don’t feel sorry for him because he still had sizable roles in The Beverly Hillbillies (1993), You’ve Got Mail (1998), Inspector Gadget (1999), Stuart Little (1999), Moonlight Mile (2002) and Where the Red Fern Grows (2003). He also took roles in television series The Guardian, Madman of the People and Boardwalk Empire.

Coleman is now in his middle 80s and continues to work. His tall and lean physique, with his serious looks, and deep voice helped steer him toward dramatic roles early in his career. This meant playing policeman, firemen, politicians, executives and authority roles.  He was cast against type and began to mix in a few comedic roles. 9 to 5 broke the door open for him as a comedic actor, and On Golden Pond showed that he could be a sensitive, romantic lead. Tootsie provided him an opportunity to play an asshole, a very egocentric character, but not totally unlikable. This role probably had as much to do with this two starring television series which capitalized on his ability to let his ego roam free and not worry about filtering any bad character traits. You almost felt sorry for these two characters, since Coleman had an ability to convey more than one character trait or emotion at the same time.