Why dig up ancient history? Because 45 years after Watergate, we seem to be going down a similar path.  It’s amazing that we have forgotten how the country teetered on the brink.

As a nation we faced a constitutional crisis with a President who believed he could bend the law to defend and serve himself.

Richard Nixon saw enemies everywhere. His response was to use the resources around him to violate the law, to interpret the law to suit his needs, and to obstruct the investigation when it got too close to the truth.

What we learned that not even the President is above the law.  Even most members of the President Nixon’s own party chose the country over party politics. Nixon argued that certain laws did not apply to the President and he tried to hide behind executive privilege.  He fought to keep control of his tapes and refuse the release of requested documents.  He also thought that firing the Special Prosecutor would be the end of things.  Some of his administration objected to this firing and were themselves fired or resigned rather than carry out Nixon’s orders.  The President is not King.  We left England and set up our own government to not be ruled by a monarchy.

Some people argue that it is okay to keep supporting a President who is unethical or becomes a tyrant if that President keeps providing what those people want.  They will support him even if those actions weaken the foundation of our government; they are blind to him crossing lines that limit power.  They are rolling the dice that corrupting power will be reigned in.  Ask the people in countries that ceded power to dictators how well that worked out.  If it happens in America, who will save us?

In Watergate, as the investigation and Congressional hearings revealed evidence against Nixon, members of his own party staged an exodus and began to acknowledge the strong case against him.  They questioned Nixon’s firings, his stonewalling of Congress, and believed the evidence of crimes committed by his staff.  The most conservative members of the Senate called on him to comply with the requests of investigators.  Democrats were calling for Nixon’s impeachment, and in time, Republicans joined ranks.  As the country began to see, through televised hearings and newspaper accounts of the Watergate break-in and unraveling Nixon administration misdeeds, the majority of the public sided against Nixon.  It took courage for Republicans to stand up to Richard Nixon, but most did.   Judge John J. Sirica, who presided over the Watergate legal issues was himself a conservative Republican.

The Washington Post, along with television reporters like Dan Rather, were in Nixon’s crosshairs.  They were branded as enemies and the White House went to exerted pressure on the Post and CBS not to publish or air stories.  Attorney General John Mitchell is famously quoted, saying that Post publisher Katherine Graham would get her tit caught in a wringer.

Even though Nixon withdrew to his own inner circle, he did care what others thought because he was an insecure man.  This was before the advent of cable television programming and the proliferation of opinion shows masquerading as “news programs”, and before the direct messaging of Twitter and the Internet. Today, tweets and blogs carry the message, unfiltered and with minimal editing for ethnics or fact. 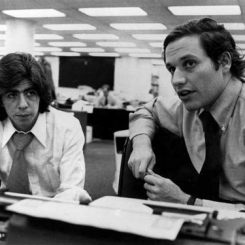 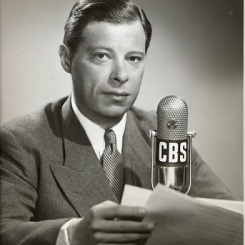 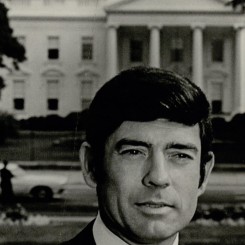 Forty years ago, the word of the media was generally accepted as by most Americans.  Those reporting and editing the news were usually graduates of journalism programs, who were after the truth.  Today, unsubstantiated claims and opinions, are absorbed by a willing public who look for information to support their views, not to form their views. Many people aren’t looking to be educated, just to hear what backs up their beliefs.  The term “fake news” was created to discredit 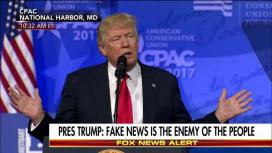 facts and truth.  There are no alternative facts, just untruths, lies and deceptions.  Something is labeled fake news if they don’t agree with it.  Legitimate news is scoffed at when it challenges our notion of what is true.  The needle of truth no longer points at true north.  As a nation we are complicit with the devaluing of fact and accepting opinion and falsehoods to medicate our reality.

In addition to the media, Nixon added others to what became his enemies list.  These were people who had done Nixon wrong at some point in time. Some of the people on the list were investigated by the FBI or IRS, or were subject of Nixon’s intelligence and black ops teams.  Nixon employed dirty tricksters like Howard Hunt, Gordon 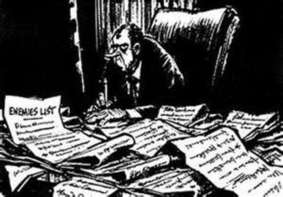 Liddy, Donald Segretti to engage in illegal or unethical activities.  What other Presidents had an enemies list?  Presidents are not loved by everyone; they have polls that measure it.   Criticism and opposition is part of politics.  Wanting to punish those who oppose or speak out against are signs of a tyrant.

Nixon insulated himself with people who reflected his own values and fed him only what he wanted to know.  He was quick to blame others for his failings as President, even targeting those in his inner circle.  Remember how quickly John Dean fell out of favor?  He was blamed for the Watergate break-in and the illegal activities that followed.

Leaders, especially Presidents, need some humility and the ability to be reflective, rather than ruled by their ego.  Lincoln was known to have filled his Cabinet with many who had opposed him.  He wanted their opinions and that the strength of character to hear them out, even when some of them clearly plotted against him.  It is dangerous to shield yourself from information, and perhaps even the truth.

Watergate was a plethora of wisdom and lessons.  Hopefully we remember that.