“Under the Milky Way” was a great song in 1988. Written and recorded by The Church, the band has survived these past 40 decades and is touring in support of the Starfish album which included “Milky Way” their biggest song. 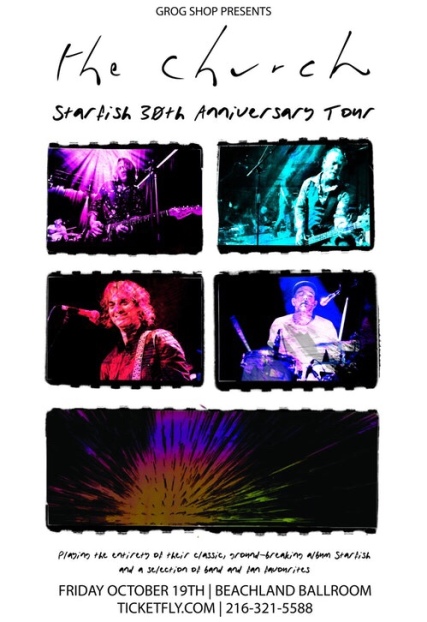 The Church came along during what was termed the “new wave” era of the early 1980s. That term applied to any young musical group regardless of the style of music. The band had a unique sound of jangly guitars and dreamy soundscapes with ethereal sounding lyrics.

Many 1980’s performers are still around, though not many record new music, but play the hits with barely recognizable lineups. The Church’s lineup has changed a bit, although leader Steve Kibley and guitarist Peter Koppes still form the nucleus of the band.  Longtime member Marty Willson-Piper left the band several years ago, and drummer Tim Powles has been on board since 1994.

The Church has recorded and toured continuously, they haven’t lived on past glory, in fact, their music is as fresh and inviting as it was when they started in 1980. Their catalog is quite impressive but they’ve had to move around to different record labels to find distribution for their releases as records in general do not sell like they used to.

I saw The Church in concert two years ago, performing with another 1980’s stalwart The Psychedelic Furs, who you might remember from their hit “Pretty in Pink”.  The Church is about their music, not big production.  Their songs are smartly written and excellently played.  Steve Kilbey, the chief songwriter, is a writer and poet, so his lyrics are sometimes a bit heady and challenging to the listener.

In the States, The Church play small venues, but their fans are very loyal. On their last tour they did something quite interesting to end their concert. Roadies started to breakdown their equipment while the band was playing their last song, the music eventually getting down to a single instrument.

The Church has always been original, and I’m curious what they will do to top their disappearing band when I see them this October. Stay tuned.