This is not a law firm but three famous names of classic 1950’s television. These three comedic personalities largely built television comedy as the era of radio comedy passed to the new visual medium.

If you aren’t a baby boomer, these names are just from history books and grainy black and white video on oldies networks.

Modern television comedy grew on the foundation these three established. Of course there were other influential comedians of the era: Lucy & Desi, Jackie Gleason, Jack Benny, Phil Silvers, Milton Berle and George Burns. What Caesar, Allen and Kovacs did was special in its own right, and their legacy is felt decades later.

Sid Caesar is most famously remembered for Your Show of Shows, which aired from 1950-1954.  This was a live, 90 minute program that chiefly developed the variety show format.  The show featured a cast of regulars, and had probably the most famous writing staff in television.  Mel Brooks, Neil Simon and Carl Reiner were part of the staff. When Your Show of Shows ended and Caesar went on to have a different show, Larry Gelbart and Woody Allen were staff writers. 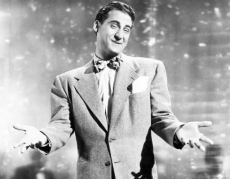 On the original show, Caesar was joined by incredibly talented Imogene Coca, Carl Reiner and Howard Morris.  Caesar had a monologue on the show, musical numbers and long comedy sketches.  Caesar, who started his career as a musician, was skilled at pantomime, bizarre dialects, doubletalk, and used a wide range of facial expressions to accent his comedy performances.  He was a very much a comedic pallet for his comedy writers to construct inventive sketches.

After his television career ended in the late 1950’s, after ten years on the air, Caesar mostly faded from view.  He made a variety of film and television appearances, and occasionally appeared in stage plays.  One of his best film roles was  It’s a Mad, Mad, Mad, Mad World, where he paired with Edie Adams (wife of Ernie Kovacs).

When Caesar died a few years ago, Carl Reiner said, “He was the ultimate, he was the very best sketch artist and comedian that ever existed.”  Mel Brooks was quoted as saying, “Sid Caesar was a giant, maybe the best comedian who ever practiced the trade.”  High praise indeed.

The variety show had its heyday in the 1950’s and 1960’s and was gone by the end of the 1970’s when Carol Burnett’s show ended production. Audience tastes changed and the format wore itself out. It was reborn as Saturday Night Live.

The variety show genre had many successes and many failures.  Most big show business names tried the format, but most shows failed because they were either not unique, couldn’t sustain their vibe, or lacked good comedy writing.  Sid Caesar stayed on the air for a decade because his shows accomplished all of those.

Steve Allen is credited as the first late night talk show host, after being featured on radio as well as having other television hosting gigs, until he devised what became the first Tonight Show on NBC.   The show ran in that format with Allen from 1954-1957, while Allen was also doing a primetime Sunday night show.  After he left the Tonight Show, he hosted other talk shows into the early 1960’s.  Allen’s Tonight Show included a monologue, celebrity interviews, audience participation and musical guests.  These are all staples included in all versions of late night talk shows that followed. 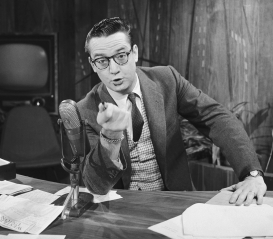 Later, as Allen moved on to The Steve Allen Show, he incorporated such regulars as Don Knotts, Bill Dana, the Smothers Brothers, Louie Nye and Pat Harrington.  Allen had the ability to have snappy but clever celebrity interviews as well as ab lib with comedy sketches going off the rails, and have sophisticated musical guests, all wrapped up in an easy format.

After the Tonight Show, Allen never recaptured the lightning in a bottle with a comedy-variety format.  His career though, evolved into many other areas and he conquered other mediums.  He was an accomplished composer and author.  He developed a program for PBS in the late 1970’s called Meeting of the Minds, where different characters from history came together to discuss past and contemporary

Allen helped revolutionize the television talk-show format, in part because it blended Allen’s variety of talents into a package that America could embrace to end their day.  His shows were funny, but also smart, they included music, and Allen served as a ringmaster who enjoyed the show as much as the audience did.

Steve Allen left his mark on television and moved on to greater challenges.  Few people had as much diverse talent as Steve Allen.

Ernie Kovacs used television as his laboratory. He started in radio and soon moved to the brand new medium of television, starting in Philadelphia.  He hosted a variety of shows and those with quick comedic wits, like Kovacs, could not only invent new things but cover when planned activities went wrong.  His ideas for how to use the camera and inventive video techniques were a Kovacs staple, even before his more successful network days.

Most people may have heard of Ernie Kovacs but never saw his show.  He made a few films that do live on in our culture but he died tragically in 1962.  His legacy of breaking rules and using technology as a tool to stretch the boundaries of visual comedy influenced filmmakers and videographers generations later.

Kovacs was hired by CBS in 1952 and he moved his show to New York where he mixed impersonations, interviews and zany characters.  He tried an evening program but was up against the Milton Berle buzz saw.

In 1953, Kovacs moved his act to late night, where he had a talk show on the DuMont Network. Late night was more embracing of his craziness, as he truly found his television legs.  He did take offs on commercials and lampooned any and everything. The Nairobi trio of apes was born during this time.  NBC hired Kovacs away from DuMont and when Steve Allen reduced his workload on the Tonight Show, Kovacs was brought in to host on the days Allen did not.

Kovacs got a morning show on NBC and later his own night time program.  This is when Kovacs got even more experimental in content and use of video effects.  He turned television on its head with his ideas and creativity.  As an example, Kovacs would superimpose different images together in the same shot.  Sounds very amateurish by today’s standards, but in the 1950’s, this was out of the box thinking.  He did the strange thing of blending music with with his skits in a way to juxtapose music and images together that you wouldn’t normally put together, creating something entirely different.

In  1959, he left NBC for ABC where he was given total creative control over this program, which lasted for one season.  He followed that with a series of specials, which aired until his untimely death.

Kovacs not only challenged television, he challenged viewers, who sometimes didn’t know what to think of his material.  Some of his concepts were like shooting stars, brilliant in the sky but not lasting.  His talent and his imagination were bigger than the television medium.  The decade of Kovacs programs on national networks are a wealth of comedic and video gold.