“Why do you think my own racing yacht is named Tenacious…? Because I never quit. I’ve got a bunch of flags on my boat, but there ain’t no white flags. I don’t surrender. That’s the story of my life.”

Ted Turner has been known as many things.  He’s a billionaire. A communications 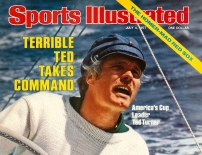 mogul. An environmentalist. A sportsman. A philanthropist. Opinionated. All are true. He is also one of the most influential Americans of the past 50 years.

He was named TIME Magazine’s 1991 Man of the Year, Broadcasting and Cable’s Man of the Century in 1999 and one of TIME 100 World’s Most Influential People in 2009.  In 1977, he skippering his boat, Courageous, to victory in the America’s Cup, and would up with the “Captain Outrageous” nickname.

“If I only had a little humility, I’d be perfect.”

Turner is a throwback to another age.  He built an empire from a small family-owned

billboard company, bought a small, UHF television station in 1970, made it a cable television superstation, grew it into a major cable communications business, built a sports empire, bought MGM studios and film library, then became the largest shareholder of Time Warner.  He sold off the MGM studio but kept the massive film and television library as content for his networks. Then he took his fortunate and found other interests including becoming the second largest private landowner in the country, starting a restaurant company (Ted’s Montana Grill), resurrecting the bison (51,000 head), and becoming a philanthropist.

Ted Turner never did anything quietly, by convention or without a bold opinion.  He was smart enough to ride the wave of the new communications paradigm, using satellite technology to beam his local television station (WTBS) onto hundreds of cable systems around the country and programming it for mass tastes.  The Andy Griffith Show was point on his entertainment spear, besides televising his Atlanta Braves baseball and Atlanta Hawks basketball games. The Superstation was born and it proved hugely successful. Turner was brash, had a grand vision and was a risk taker.

A few years later, he started CNN (Cable News Network) as a 24-hour cable news network.  From there he started TNT, CNN Headline News, Cartoon Network (after buying Hanna-Barbara) Turner Classic Movies and bought into everything communications-related.  He bought several more movie studio assets including Castlerock Entertainment and New Line Cinema. His aggressive expansion, and debt load, began to cost him control, as he needed capital and took on investors, limiting his independence. In 1996, he sold his company to Time Warner for $7.7 billion, becoming the largest stockholder and vice chairman of the board.  While it increased his wealth, he gave up control of his assets, and had bosses at Time Warner.  For years, Turner made his own business decisions, now he was part of a corporate maze of boards, lawyers, advisers and shareholders. In 2000, he was eased out of the company, fired, in his words.  Time Warner called it a reorganization, with Turner’s duties shifting, including folding his media assets under other executives, no longer overseeing CNN and other Turner Broadcasting companies.

“Some people have transcendent notions about changing the world. Ted believed, in his unstoppable fashion, that he could — and did. He was and is maddeningly gifted with a spark of genius.” – Gerald Levin, former Time Warner Chairman.

provided a disaster, that lowered the value of Time Warner stock, costing Turner several billion dollars in stock value.  He eventually sold his Time Warner stock, but still pledged to give a billion dollars to the United Nations.  He also founded the Nuclear Threat Initiative to prevent use of weapons of mass destruction. In 1991, he created the Captain Planet Foundation to fund  environmental projects for children, launched the Turner Endangered Species Fund, to emphasize restoration efforts of endangered or imperiled species, and in 1998, he created the United Nations Foundation (UNF).

He continued to buy up land for his ranching empire, and helped the bison make a recovery.  In the meantime, his 10 year marriage to actress Jane Fonda ended.  The Ted Turner we used to know kind of went off the communications grid.

In addition to his other philanthropic pursuits, he’s a member of the Giving Pledge where he will give away most of his wealth.

“There is no greater legacy that we can leave our children and grandchildren than a peaceful and safer world.”

In a recent CBS Sunday Morning interview he discussed the onset of Lewy Body Dementia and what he’s doing to prolong his health.  He’s engaged in a different kind of battle now, but there’s still no surrender in Ted Turner.

“I know what I’m having ’em put on my tombstone: ‘I have nothing more to say’.”

Ted Turner’s legacy.  He was a pioneer in utilizing satellite technology to challenge the

broadcast networks.  He created his own cable news service in direct competition to the networks and other news services.  Turner was on the ground floor of vertical integration, something the federal government had once outlawed, where companies couldn’t own content creation and the distribution pipeline.  Changes in federal rules, and deregulation, now allowed companies to control content, and how it was delivered, in this case cable systems and the internet.  Turner achieved this with his Superstation and ultimately as Turner Broadcasting merged into Time Warner.  This became the new standard throughout the entertainment and communication industry.

The CNN legacy is an interesting one.    In the beginning, Turner hired respected news

professionals, and built the network through breaking news and reporting from around the globe.  The network could focus on a story and stay with it until it wasn’t news anymore.  Did Turner get involved in editorial policy? Not that I’ve read, and I’ve looked.  CNN is now a frequent recipient of Donald Trump attacks, who calls it failing and fake news.  Turner, who says he doesn’t watch it very much, feels the network spends too much time on politics.  He made this remarks on his CBS Sunday Morning interview. CNN has changed in almost 40 years, but so has our expectations of news organizations, and those posing as news organizations.

Turner’s own view of his legacy is wrapped about the planet and what he will leave to other generations.  His efforts in controlling nuclear weapons, protecting endangered species and climate change, speak to his own sense of mortality and responsibility.  The idea of giving money to the UN came as he saw large scale problems and no government or response equal to the task.  As a self-proclaimed conservative, Turner’s views seemed to morph over the years. Maybe not so outrageous, but no less courageous.