There are a group of sitcoms that many of us grew up with: I Love Lucy, The Beverly Hillbillies, Andy Griffith, Bewitched, I Dream of Jeannie, MASH, The Dick Van Dyke Show and Gilligan’s Island. The most replayed television series in history. Shows we’ve seen so often the dialogue is second nature.

Gilligan’s Island is the definition of escapist viewing.  It had a silly premise and outlandish episode stories. The basic episode storyline centered on some opportunity to escape the island or to avoid perishing, with the Professor devising an invention or scientific fix, and Gilligan complicating or fouling up the rescue. Creator Sherwood Schwartz stuck to the formula for three seasons.

The show started with a pilot, which had several different character and actors.  The pilot never aired but it had the basic blueprint of the show. By the time it reached the air, the seven familiar castaways were in place.

Gilligan’s Island was the visual potato chip, you just kept watching, it was tasty but not very nutritional. When it went off the air in the late 1960’s it immediately went into syndication and has never stopped. As a kid growing up in that era, it was regular afternoon viewing. Back then, before hundreds of cable channels and video streaming, there were few options. Late afternoon or summer days were perfect for kids to become indoctrinated with Gilligan, and later with The Brady Bunch, another Sherwood Schwartz production.

Gilligan’s Island was produced by CBS, United Artists Television and Gladasya Productions. Gladasya was owned by comedian Phil Silvers, and now by his heirs. What a goldmine for a show that left network television 50 years ago.

From what I’ve read, the show was ranked number 47 in the ratings at the end of season number three, and had been verbally picked up for a fourth season. As part of the renewal of Gunsmoke, Gilligan’s Island was sacrificed.

You might recall a 1978 television film that finally found the castaways rescued, but not done with the island. More than a decade in syndication required some closure, yet it led to two addition films. By the third film, Jim Backus was in poor health and only made a cameo.

While each character on the island varies in education and social ranking, they are more alike than dissimilar. The do not really represent polar opposites of society, although for mid-1960’s television, it fits the paradigm of that network era.

What you take away from the series is how well these seven folks worked together and how close their bond. Despite Gilligan’s many catastrophes, his heart was in the right place and the other six could always depend on him to support their community. The Skipper, as the captain of the Minnow, is the de facto leader of the group, but it really operates as participatory assemblage, almost like a commune, without the free love.

This isn’t Lost, or Lord of the Flies. These folks liked each other, worked together and despite their dilemma, were reasonably happy.  Each 25-minute episode is self-contained, meaning the storyline does not carryover from episode to episode.

Season one of the show was filmed in black & white, then it shifted to vibrant color for the next two seasons.  After Ted Turner purchased the MGM library (which owned United Artists), season one was colorized.  I prefer the black & white episodes instead of the paint by numbers version.

A few items of trivia

Jerry Van Dyke was first offered the role of Gilligan but turned it down to star in My Mother the Car.

The Professor, whose real name was Roy Hinkley, 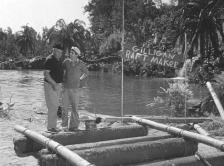 was to begin writing a book called Fun With Ferns.

Jayne Mansfield turned down the role of Ginger and Raquel Welsh tested for the role of Mary Ann.

The Professor and Mary Ann were not specifically

listed in the opening credits during season one, it only changed with series star Bob Denver complained and threatened to boycott production.

Mrs. Howell’s first name is not Lovie, it is actually Eunice.  The Skipper’s actually name is Jonas Grumby.

The original theme song was penned by John Williams (Star Wars and everything by Stephen Spielberg) but was rejected for the song written by producer Sherwood Schwartz.

The lagoon set was famously used in The Creature From the Black Lagoon, and in recent years was finally paved over for expansion of the CBS Studios and parking lot.