The Clash burst onto the scene in the mid 1970’s but didn’t hit the mass audience until 1979 with their album, London Calling.

The Clash are categorized as “punk rock” which grew to prominence in the late 1970’s as a response to the pomposity of popular but grandiose musical acts like the Eagles, Pink Floyd, Yes, Genesis and album oriented rock AOR in general that dominated FM radio.

There was already a movement of younger bands with a stripped down and edgy sound like The Pretenders, Blondie, Talking Head, The Ramones, Cheap Trick, The Police and poppy groups of Beatlesque songs like Elvis Costello, The Cars, Squeeze, XTC, The Knack and many others.  Whatever the label is attached to these bands, they were moving the needle (pun intended) in a new direction. The laid back L.A. singer/songwriter era (America, James Taylor, Linda Ronstadt)  was closing, the progressive-rock arena theatrical shows were becoming passé, and music was moving onto the next big thing.

Punk rock rebelled against more than aging rock stars, they targeted traditional societal values, existing political structures, consumerism, good manners and embraced an aggressive and defiant push-back in general.  Johnny Rotten (Sex Pistols) was the poster-boy for this generation landslide.  While the punks thought traditional society sucked, those on the other side wondered what rock these punksters crawled from under. Unfortunately, many bands were swept up in the punk rock label who really had no kinship, but who brought a more immediacy and high energy, along with a more basic lyrical subject matter.  This tectonic shift caused even the rock dinosaurs to make some stylistic and musical changes.

I’m no great authority on punk rock, but from this new explosion of musical lava came one very talented group that mixed a variety of musical forms into what fans, and even radio, found to be interesting and quite memorable.  In some ways, the Clash became victims of their own success and what they stood against, as their popularity grew and the trappings of pop stardom descended on them.

The first album, The Clash, was released in 1977 and although a success, the American record company was already insisting on changes to make them more accessible to fans and radio. In America, this first album was only available as an import, so their first actual release was called Give ‘Em Enough Rope, was released in 1978.  With such endearing song titles as “Drug-Stabbing Time” “English Civil War” “Julie’s Been Working for the Drug Squad” “White Riot” “London’s Burning” and the like, the Clash fit right in with music that meant to rebel and shock, but also to create unity with other young people who might have felt on the margins of society.

Beneath the rage, aggressive lyrics and curt musical production, the Clash had something I didn’t find in other bands, the ability to harness this energy with memorable musical styles.  The record company insisted that veteran producers work with the band, and that was a very good decision.  CBS, the American record company, also tinkered with their albums substituting songs for release in the States.  Whatever the rationale, I found the initial release of Give ‘Em Enough Rope, and the expanded version of the CD to be a solid collection of songs. 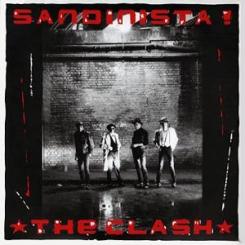 In 1979 came London Calling, a big hit that sold over one million copies in America.  “Train in Vain” was released as a singled and it clicked with a fan base beyond their core fans.  The album had tough musical themes but the songs had enough polish for mainstream FM radio.  Even then, some labeled the album “post punk,” an indicated that either the Clash or the punk movement, had moved on.

The two main Clash songwriters were Mick Jones and Joe Strummer, who deftly blended reggae, ska, R&B, jazz and hard rock.  The beginning of the 1980’s signaled another shift in popular music.  Punk would be followed by British synth-pop wave and some awful hair and clothing styles.  God help us.

London Calling, an ambitious double-album, would be followed by a massive three-album set called Sandinista!.   This set is like the Beatles’ White Album, full of songs from the songwriting laboratory, some very commercial sounding, others more experimental, but all of them interesting.

Sandinista!, released in 1980, is the high-water mark for the band, certainly it was a triumph in songwriting.  Not only do they again blend a wide variety of musical styles, in a growing world music conscious industry, but the songs reflect an ever-present political focus with a continued worldview maturity.  The Clash, whether they intended to or not, discovered how to channel the angry attitude and message into songs that begged to be heard by a wide audience.  The album appeared on several best album lists and yielded four international singles.

In 1982 came the last album with the four core Clash members.  Combat Rock was the group’s highest charting album and included the classic songs, “Should I Stay or Should I Go” and “Rock the Casbah.”  The album was a critical success and sold over a million copies in the U.S. alone, but drew criticism from more hardcore fans as too mainstream, ironically one of the original motivations for the punk movement.

After the release of Combat Rock, guitarist Mick Jones and drummer Hopper Headon were fired for drug use and bad vibes.  Thus ended the glory of the Clash.  A revised lineup would release Cut the Crap in 1985, it was not a hit, and the Clash essentially disbanded.