Read down to the end for a video clip of Bowie on Conan O’Brien.

The first Bowie album I owed was a used copy of his greatest hits, ChangesOneBowie. I already knew a few of the songs, “Rebel, Rebel,” “Changes,” “Space Oddity” and “Fame.”  This album opened my curiosity to dig deeper into his music.

Even if you aren’t a Bowie fan, you have favorite Bowie songs.  It’s hard to resist “Golden Years” or “Let’s Dance” or “Young Americans” or any one of his familiar songs.

Bowie in 1970’s changed directions a lot. Nearly every album (at the rate of one per year), had a shift in both music and his identity. He had many personas through the years, including the glam androgynous look and the “thin white duke.”  I never got hung up on who Bowie was at the moment, it was the music that interested me.  He could change his hair color or dress, adopt a different name, surround himself with some avant-garde lifestyle or take on some bizarre film role.  Bowie was already a brand. No matter.  What did matter was what happened when the needle dropped on the vinyl.

Bowie’s passing was as mysterious as his life; gone quickly and too soon.  He left behind a tremendous legacy of recordings, working steadily and recording right up until his death. Bowie became very selective about releasing new music but be continued to write, and he recorded his concerts.

Here’s what I found most interesting about his musical journey.

After the very popular albums Young Americans (1975) and Station to Station (1976), he went full tilt, releasing something called Low (1977).

Young Americans was heavy on soul and funk, although he “Bowieized” any blended style he embraced. He didn’t need a large band to translate a vibe, he could simplify a musical style with a minimum of accompaniment. On his 1974 tour across America, Bowie got really into soul music, and ended up booking recording time in a Philadelphia recording studio where a lot of soul music was made.  He then continued his tour, adding some soul elements and then resumed the recording sessions, with John Lennon aboard. The funky “Fame” was written from these session and it became Bowie’s first number one hit. 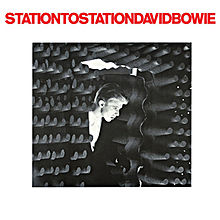 Station to Station had a more electronic, contemporary feel but it could swing with some R&B grooves.  Everything about this album signals that the tectonic musical plates were shifting. Bowie was living in Los Angeles at the time, snorting mountains of cocaine and being chased by his demons. He referred to this period of his life as his darkest.  Interestingly, this coincided with this movie star period, The Man Who Fell to Earth.

According to Rolling Stone critic Lester Bangs, the album “has a wail and throb that won’t let up … a beautiful, swelling, intensely romantic melancholy.”

Station to Station emerged from this chaos as a swinging, emotionally accessible album. Yet, he was about to turn another corner.

The first listen of Low was like running into a brick wall without a helmet. The music was stark, grating and drenched in synthesizers that in no way sounded like any of his previous works. I found nothing that sounded like a hit single, although he did release a couple of songs as single. Yet, I liked this album with the downbeat vibe and heavy electronic pulses like slow-motion waves riding to shore. European groups like Kraftwerk and Tangerine Dream we’re traveling these electronic ambient road, but mainstream rock fans were less familiar with style of music.  With Bowie’s past popularity, the album made it to number 11 on the U.S. album chart.

During the recording of Low, Bowie moved to Berlin, the next move in his nomad period, living in a very ordinary apartment building in a working class area.  During these recording sessions he incorporated Brian Eno and Iggy Pop into his working circle, as well as King Crimson guitarist Robert Fripp.  Bowie abandoned his past musical stylings for this atmospheric and ambient sound clouds.  Dark clouds at that.

Bowie referred to Low and the next two albums as his Berlin trilogy. Lodger and Heroes followed over the next two years. These two albums did not have quite the dirge that Low offered up, having more conventional songs but still conjured up very strident blasts of guitar and synthesizer, in a strafing style like a hit-and-run style. Bowie seemed to be listening to the punk rock scene for energy. If you are new to Bowie, these three albums are not where you want to dive in. Bowie was definitely ingesting drugs and exploring other influences during this period, the chameleon that he was.

Bowie was always a trendsetter, but the 1980’s would return Bowie to a more successful period and a sound.

“More and more, I’m prepared to relinquish sales, as far as records go, by sticking to my guns about the kind of music I really wish to make,” Bowie is quoted in Rolling Stone. He certainly did prove that with his previous three albums, but Scary Monsters was more of a return to pop, Bowie-style.

Scary Monsters started the revival with a set of more conventional Bowie songs in a more inviting style, even radio-friendly. “Ashes to Ashes” was a very accessible song and attracted back Bowie fans.

Let’s Dance, with Nigel Rodgers helping with production not only gave Bowie his best commercial sound in a decade, it catapulted him onto MTV, where he had a huge presence. “Let’s Dance,” “China Girl” and “Modern Love” helped the album sell over 10 million copies in America. Bowie toured the world, taking a young guitar player named Stevie Ray Vaughn along for Bowie’s most ambitious tour.

Bowie followed up with two less successful, though big selling albums that didn’t have the flare or originality of Let’s Dance. He now had a big record deal and the stakes were much higher, expectations that he match or exceed his previous success. He staged big tours, made videos and got songs played on the radio, but he had to keep feeding the beast. Success was expected, even if originality passion weren’t. He was in essence a victim of his own past success. He referred to this as his “Phil Collins period.

Whatever pressures he felt to keep his hand on the throttle, Bowie was an astute businessman and master of his image and brand.  Whatever problems he encountered with royalties and management in the early stages of his career, he learned and prospered.  Bowie was very wealthy and his estate generates a huge income.

Bowie then detoured again, forming Tin Machine, which he pursued over the several years. I guess that was an escape or creative outlet he needed, but I didn’t see the purpose, as I bailed out after the first album.

Bowie returned in the early 1990’s as a solo artist and a new direction. That’s where Bowie and I parted company. Instead of following his new path, I circled back to his earlier material.

In recent years, his estate along with his record companies had remastered his early works and mined the vault for unreleased songs and alternate versions. They have taken his fifty-year career and divided it into sections, released huge sets of materials. What’s old is new.

The subject of Bowie fills books, so this is just a sliver of his musical odyssey.  Look for more blogs on Bowie’s music.  If you have come this far, there is one more thing you need to see.  Conan O’Brien assembled a montage of video clips from Bowie’s appearances on his shows. It’s funny and a sweet remembrance.  Enjoy.