Selleck was poised for a big career as perhaps the next Burt Reynolds or Harrison Ford, but it didn’t happen. Magnum P.I. made his reputation and movies were the next logical step in his career.  His movie career looks like a roller coaster ride.  His great television personality did not really transfer to the big screen, but that doesn’t mean it was a failure.  Either he was too much like his television persona or he tried things that were too different.

Millions of fans saw Three Men and a Baby, but many fewer saw the languid sequel.  In the right project, Selleck excelled.  Quigley Down Under, very respectable film. In & Out, same thing.

Selleck has made a number of television films, apart from the Jesse Stone series, Westerns mostly, that put Selleck in a familiar genre with a built-in audience.

Most of his feature films under-performed, they arguably failed to advance his career, but many had some fine points. Let’s take a look.

High Road to China (1983) Unfairly referred to as “Indiana Jones Lite.” A good start to Selleck’s starring role in feature films. Competently made. Selleck had a role not too far from Magnum.

Lassiter (1984) This must have looked like an “easy A” to producers, but it proved a dud. Playing a classy jewel thief, a la Cary Grant, who helps law enforcement with a case, it was stylish but failed to enlighten fans. Terrible no, lightweight as cotton candy, yes.

Runaway (1984) A very odd choice, a science fiction film by Michael Crichton. A policeman who captures and decommissions runaway robots. It’s a goofy film co-starring Gene Simmons. Again, failed to earn back its budget and only average reviews. Selleck was actually solid in the role, and it’s rather campy now.

Three Men and a Baby (1987) A big hit. Ramped up Selleck’s film career when he needed a hit. Directed by Leonard Nimoy, it made almost $300M on an $11M budget. On Rotten Tomatoes, the critic scores are much higher than the audience scores.

Her Alibi (1989) My favorite Selleck film, a light comedy, mystery that is silly but surprisingly romantic. Selleck is Cary Grant lacking confidence and skill with women. A fine supporting cast helps with a light touch by Bruce Beresford (Tender Mercies, Driving Miss Daisy). While the film made a small profit, it was savaged by critics. This critic liked it.

An Innocent Man (1989)  Directed by Peter Yates (Bullitt, The Deep), the story of a wrongfully convicted man. This was a better film that its box office indicated, a decent role for Selleck that was very different than other roles.

Quigley Down Under (1990) Selleck was a veteran of numerous television Westerns, but this was a twist, taking place in Australia and a cowboy who only uses a long gun. Australian Simon Wincer directed and turned in Selleck’s best film to date. Unfortunately, the film garnered mixed reviews and only earned back its budget. However, this film is quite popular with Selleck fans.

Three Men and a Little Lady (1990) The sequel. I watched it once. Too cute and contrived. I hope Selleck was paid a fortune for this.

Mr. Baseball (1992) Selleck plays American baseball fading star Jack Elliot who winds up in Japan at the end of his career. He has the unexpected trouble adjusting to Japanese culture and how they play the game.  Elliot hopes to revive his career to return the MLB. Selleck has some fine moments and the film builds to something very entertaining.  Directed by Fred Schepisi, who usually handles gentler fare.

Christopher Columbus: The Discovery (1992) Selleck plays King Ferdinand in a big budget but lame telling of Columbus’ journey to the New World.  Selleck is okay in what he was given.  Director John Glen-helmed several Bond films.  He needed Q to come up with something to save this bomb. 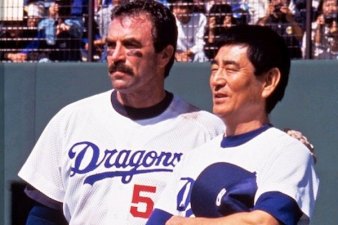 Folks! (1992) A man takes in his aging parents.  Hilarity was expected.  Directed by Ted Kotcheff, a fine director, but this film made back only a fraction of its budget.  Marginally funny, mostly limp.

Open Season (1995) Selleck has a small part in a film written and directed by Robert Wuhl.  Neither the film or the part are much to remember.

In & Out (1997) Selleck has a small but vital role in this comedy. He plays an entertainment reporter who smells a deeper story and shares a screen kiss with Kevin Kline.

The Love Letter (1999) An ensemble film where Selleck plays the Fire Chief in a small New England town, who has always been in love with the owner of a book store. She never takes him seriously until after many years learns that he wanted to marry her. A very earnest role for Selleck, the man who constantly fails at love. A great cast and enjoyable film.

Arguably, Tom Selleck has had his greatest success on television: two long running series and many well-received television films.  His feature film career wasn’t explosive, but it had some high points.  Selleck obviously had leading-man handsomeness but was he more of a character actor disguised as a leading man?  He may often be “the face” but he works quite well in an ensemble.