Filmed in Cinemascope, the film is rich in the colors and vastness of the desert landscape.  Director John Sturges gives it a distinctive look and fills the screen with the tension in this town. The pacing is fast enough to advance the plot but allows the mystery to unfold in bits and pieces as cracks develop in the characters’ story and resolve.  Sturges would go on to direct The Magnificent Seven, Ice Station Zebra and The Great Escape.

Spencer Tracy is the stranger who gets off the train in a one-horse town and immediately attracts the wrong kind of attention.  Apparently, no one every departs at this location.  The telegraph agent nervously telephones someone about the arrival.

Tracy is greeted with suspicion and is told there are no available rooms even though it appears differently.  Tracy checks in anyway.  Some of the town’s folks follow him inside the hotel.  One, Hector David (Lee Marvin), is sitting on Tracy’s bed when he gets out of the bathroom.

Other town folk are gathered in the lobby talking about who this stranger really is.  Tracy is Macreedy, a one-armed man in a dark suit who really provides answers to questions. He is looking to get to Adobe Flats and needs to rent a car to get there.  He says he is only staying 24 hours.

This is a story about racism and a town that tries to keep a secret buried.  Macreedy is on a mission and the more resistance he gets, the deeper he digs in.  This is one older man, with one arm, against a group of bigger, stronger men of much less character.

Reno Smith (Robert Ryan) appears to be the leader the town’s people.  Smith sends off a telegram to a private detective find out about Macreedy.

Macreedy gets no cooperation from the sheriff who gets shook up when he asks about Komoko. Smith seems to know Komoko, who was a Japanese farmer, but was taken to an internment camp. Finally Macreedy rents a Jeep to go to Adobe Flats.

Smith gives orders to the sheriff, a man with half a conscience, who pushes back a little. The private detective writes back that he can’t find anything on Macreedy.

The doctor also has a sleeping conscience. The sheriff admits that he didn’t do his job, whatever happened four years ago that has the town tied up in knot to keep hidden.

Macreedy gets to where Komoko used to live, a burned-out farm house. He finds flowers growing where they shouldn’t. Watching him is Coley Trimble (Ernest Borgnine), a thug from town. Trimble tried hard to wreck Macreedy on the road, ramming the Jeep until he goes off the road, but makes it back to town. 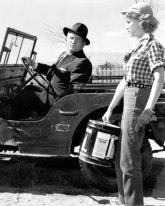 Macreedy tried to rent the Jeep again but Liz (Anne Francis) won’t rent it to him. Smith tried to find out why he’s looking for Komoko. Macreedy won’t budge or get upset. Smith doesn’t like outsiders. He blames the burned out hose on kids. Macreedy tells Smith something is buried up there because of the wildflowers. This rattles Smith.

Macreedy tried to call out from the doctor’s office but he’s told all the lines are busy. The doctor tells Macreedy they are going to kill him. Why should he get mixed in? The doctor offers his car but David disables it.

Macreedy next tries to send a telegram, with a reluctant telegraph operator. Contacting the outside world seems quite difficult. 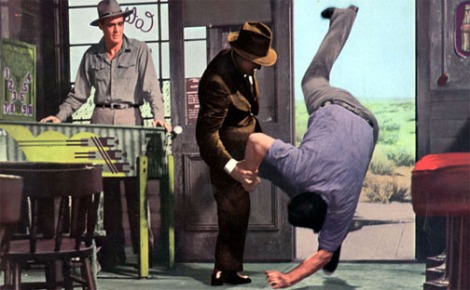 He then does to the diner for lunch, but it’s interrupted by Trimble, who pours Tabasco in Macreedy’s chili. Trimble tried provoke him into a fight. Macreedy karate chops Trimble in the neck, making him gasp for air. Trimble comes after Macreedy but his punch is blocked, is punched back and gets another karate chop and the a knee to the face. Trimble is bleeding and wild with anger now, he lunges at Macreedy only to be blocked again and goes barreling out through the screen door into the street. Smith, David and the others are shocked by what they just witnessed. Trimble picks himself up, lunges again to Macreedy who gives him a judo flip onto the diner floor out cold.

Macreedy confronts Smith with the murder. Tells him he made a mistake depending on these thugs. The doctor arrives, impressed with the result of the fight.

Macreedy badgers the young hotel clerk. The doctor tells why Komoko was killed. Smith felt cheated by Komoko who found water on the property. Smith and others got stuck and went to see Komoko and killed him. The town’s folk had to live with what Smith did.

Macreedy finally explains why he is looking for Komoko. Komoko’s son saved Macreedy’s life in the war, but died in action and received a medal for his bravery.  Macreedy traveled to Bad Rock to give the medal to the elder Komoko.  Macreedy also admits that his battle with Smith has fueled his desire to get some degree of justice for the Komoko family.

The hotel clerk was part of the group, although it was Smith who acted impulsively and killed Komoko.  The clerk is sick about what happened, and he wants helps get Macreedy out of town at nightfall. He and the doctor lure David into an ambush, knocking unconscious.

Liz drives Macreedy out of town but Liz drives him to an ambush to help Smith. He plans to get rid of Liz who is a witness. He shoots Liz trying to run away. Macreedy is pinned down from Smith’s gunshots, but devises a Molotov cocktail from the Jeep’s gasoline. He throws it at Smith, catching on fire.

Macreedy drives back to town where the former sheriff is ready to help out. He and the doctor have rounded up the thugs. The state police arrive to take away the prisoners.

The doctor asks for Komoko’s medal, for the town, to help them rebuild.

Besides Ryan, Marvin, Francis and Borgnine, this cast is deep with Dean Jagger, Walter Brennan, John Ericson and Russell Collins.

This might be seen as a harsh film, violent, with sadistic characters.  That’s true enough, but it is a fascinating film to watch the Tracy character go about his business, stymied at each step by someone in the town.  The cast is stellar, with veterans like Tracy and Brennan and younger actors like Francis, Borgnine and Marvin.