Two years ago, I saw them in concert and marveled at how good they sounded. Dewey Bunnell and Gerry Beckley are celebrating 50 years together this year.

America hit the big time right out of the gate, their first album featured “A Horse With No Name” one of the defining sounds of the soft-rock 70s. Lots of acoustic guitars and soulful harmonies. These guys were Americans living in England but you thought of mountains, beach and American desert in their songs.

If you are a guitar player, their debut albums is a goldmine of mostly layered acoustic guitars. The album and single each reached number one on the charts.

Their second and third albums were self-produced and had a fuller musical sound with keyboards and electric guitars. Homecoming broke the top ten as did “Ventura Highway.”

Hat Trick didn’t fare as well and none of the singles scored as hits, although “Muscat Love” had a weird popularity of sorts. 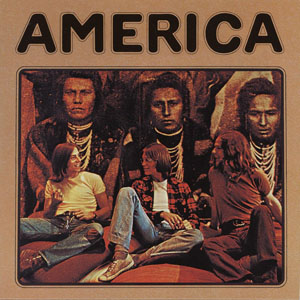 America was at a crossroads as their sales and chart success was on a downward arc. Enter former producer George Martin.

Besides the craftsmanship, their songwriting was tighter and more mature. Martin challenged them and America responded.

Hearts (1975) was the high-water mark for the band. Again, another top five album and a number one single, “Sister Golden Hair.” An even better song was “Daisy Jane,” Beckley at his best.

The next couple of albums, Hideaway and Harbor, saw diminished returns as their songs were weaker and the public’s taste began to change.

In 1977, Dan Peek left the group, and Bunnell and Beckley soldiered on, releasing a live album, pretty much a collection of greatest hits, backed by an orchestra, conducted by famed composer Elmer Bernstein. It is a fine album but the public yawned.

For the next decade, America would struggle, switching labels several times, producers and using outside writers. Their partnership with rocker Russ Ballard produced a notable hit, “You Can Do Magic,” a top ten hit, but the duo weren’t happy with their lack of participation in the Ballard projects. They did score with another song that made the charts, “The Border.”

In 1991, Rhino Records gathered some of their post 1975 hits, a few deeper cuts from their early albums and several new songs. Encore, was a solid collection. The newer songs show remarkable growth and precision as songwriters. What they were producing was adult contemporary music, songs miles away from the pop charts.

In 1994, came Hourglass, a set of new songs. “Sleeper Train” and “Young Moon” are standout songs, but the set attracted very little attention.

America never came off the road, they remained a strong concert attraction all over the world.

Human Nature, released in 1998, showed the boys continuing to mine their second breath as songwriters. “From a Moving Train” and “Moment to Moment” contain the old magic even if the band no longer received any airplay for their new music.

Because their old music still sold, and they were still concert draws, the group released several live recordings, and more greatest hits collections, but no new music.

Here & Now, was a novel idea. Recorded in 2006 and released in 2007, it is a two-disc set. The first disc is all new material, and it contains several exceptional tracks. “Chasing the Rainbow”, “Indian Summer” and “Look at Me Now” deserve to be on a greatest hits list. The band recruited two young producers and a group of guest musicians to help. The second disc is a set of their older material recorded live for XM Satellite Radio. It’s a great collection.

Back Pages, released in 2011, is a set of songs from 1960s and 1970s, but songs not written by America. These are songs they liked enough to record.  “Time of the Season”, “America” and “On the Way Home” are quite interesting choices.

Lost & Found, released in 2015, is a set of new songs recorded in the previous decade but never released. “Driving” and “One Horse Town” are two of the strongest songs. Overall, this set is not as strong as Here & Now and Human Nature, but happy to have some new music.

Beckley has produced a number of very interesting solo projects. He actually worked with David Cassidy in earlier years. In 2001, Beckley, Carl Wilson and Robert Lamm recorded the album, Like a Brother. The best thing about the album were the harmonies: America-Chicago-Beach Boys. The songs weren’t stellar and the production was average, but the voices soar.

America will always be known as soft-rock, sweet harmonies and somewhat obtuse song lyrics. They were perfect for the soft-rock early 1970s, with a kinship to Bread, Neil Young and Carole King. Fifty years later, Beckley and Bunnell show no sign of putting the horse in the barn or pulling off Ventura Highway. I’m glad for that.