Until recently, I had never seen this film.  I knew about it but the downbeat subject matter never drew me to seeing it.  It is a very powerful film.

A story about a son who can’t connect with a parent. One of the parents dies and the bitter one remains.  Nothing the child does is ever enough for that parent’s approval. The parent never took time to see the child, and now adult, as an individual or recognize his/her accomplishments.

This film is almost fifty years old but it’s family themes are relevant today. Family dynamics aren’t like technology; issues of expectations, disappointment and communication don’t change. They are timeless.  Sadly, as long as there are parents and children there will be stories like this.

As you can already tell, this is not an uplifting story. It contains themes many of us struggle with in our families. 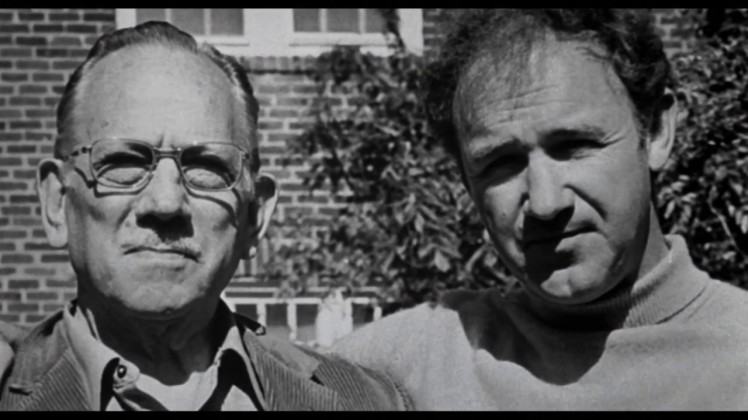 Gene Hackman and Melvyn Douglas co-starred in this highly praised film based on a stage play. Both actors were nominated for Academy Awards, as well as the screen adaption.

This was Hackman’s first starring role, even though he was nominated for Best Supporting Actor.  He was in nearly all the scenes but he’s a supporting actor? Anyway, he does a wonderful job of sitting on his anger and hurt throughout the film. He balances the internal conflict of a dutiful son and an honest one. He is a caring son who doesn’t know how to connect with his difficult father.

Douglas as Tom Garrison, gives the performance of a skilled tradesman. He’s also angry, more at life and the world that no longer has any use for him. He’s never been able to leave behind his unhappy childhood and is quick to put a value on everything he’s done as a family provider. He’s worked hard for his family and he still wears that on his sleeve.

His daughter Alice, married a Jewish man and was kicked out of the house. An open family  wound that never healed.

Hackman’s character, also named Gene, stepped up to fill the void, but he’s always resented his father’s lack of appreciation and domineering way.

Gene lost his wife a year ago, and he has a new love, but she lives in California and being with her would require a move from the east coast, and leaving his father, who can’t live independently anymore. Tom hates the thought of Gene leaving and puts the guilt on him by saying it would kill his mother if he left.

Ironically, Tom’s wife dies early into the film, the partner who understood him, puts up with him and even glossed over his faults. She still saw the dashing man she married, though worn down by life. Tom can be a major pain, trying and disrespectful to others, but she still sees him at the height of his success.  She provided the “calm” in the family; and now that’s gone.

Gene rages after spending time with his father, replaying all the irritating little things his father has said and done in their visit. Tom acts like Gene never visits and can’t remember things Gene likes, the things that makes him an individual. Yet, when son is with father, he never stands up for himself, always wanting to please him, as the anger accumulates inside.

Alice comes for the funeral, carrying her own resentment, but concerned about Gene, who she knows wants to move to California to get married but is conflicted about leaving his father alone.

At night, the three are at Tom’s house, with Gene and Alice in the beds they had as kids, not sleeping, staring around the strange rooms, revisiting their past.

Alice volunteers to talk to their father about a live-in housekeeper or moving to a nursing home. Alice and Gene debate the options, Gene is remorseful how things have gone sideways. He always wanted to love his father.  Alice implores him to stand up for himself.  It is her way of standing up to her father, after mistreating her years ago.

Alice intends to leave the next morning, she tells her father.  The conversation goes predictably bad with Tom, after suggesting he hire a live-in housekeeper.  Tom is furious about the insinuation that he can’t live on his own.

When the opportunity arises for Gene to stand up to his father, he folds, but his father angrily pushes back. His kids are ungrateful. Gene and Alice bicker. Gene offers to help in the short term but Alice knows it will take over his life. Gene says he wants to find meaning with his father, but Alice says it’s sentimental crap. Alice knows he’s always tried to please his father. He’s looking for a mother’s love in a father, something that isn’t there. Alice is grateful she got kicked out because it helped her face a difficult and cold world.

Gene as the son has to deal with a collision of emotions and responsibility.  Gene says he’s going to stay in the short term, and his fiancee is coming for a visit.

After Alice leaves, Gene visits several nursing homes to see what they are like. The patients are all sickly, crammed together in old, institutional spaces. It’s difficult for Gene to see, the guilt clearly visible on his face.

Peggy, Gene’s fiancee arrives. She says she will move here if Gene wants it.  When Peggy is introduced to Tom, he’s forgetful but thoroughly charms Peggy.

When Ton and Gene are alone, looking at old family photos, Gene asks to see a photo of Tom’s father. Tom shows him one and it leads to some hurtful remembrances. Tom’s father walked out on his family, and Tom holds that hurt close to his heart. He describes visiting his deathly ill father after many years and sending him oranges as a dying wish.  Tom remembers Gene’s early years and that Gene used to sing. Tom listened to Gene sing, but was always upstairs, never in Gene’s presence as he sang. Tom suddenly breaks down weeping. He thought he’d die first and not end up having to deal with these issues.

Gene shifts the conversation to Peggy, getting married and leaving for California. He wants his dad to move out there too. Tom offers to have Gene move Peggy and family to live in his house. Tom tries to discourage Gene from getting to far into the relationship. Gene pushes back, and Tom says that Gene has always been ungrateful. Gene blows up at Tom’s effort at guilt and resentment. Gene finally unloads. Even in his anger, he says he admires his father and is grateful, but he admits he can’t love his father. He’s tried to love him but Tom never opens the door.

“Consider me dead to you. Who needs you. I’ve lived my whole life so I can tell any man to go to hell!” – Tom says when Gene finally stands up for himself.

Gene leaves. He says in a voice-over that he never returned to the house. He left for California. He returned several times to visit, and his father went to California several times, until his arteries hardened and until they had to put him in a hospital, where we stared into space and lost comprehension. Tom died staring at the television, alone, without so much as an orange in his hand, a reference to Tom’s father’s death.

Some families are cursed with the shackles of past events that unfortunately continue to color relationships and even get passed along, as what happened with Tom Garrison.  Sometimes breaking that curse means putting distance between family members, as Alice did and as Tom ultimately did.

“Death ends a life, but it does not end a relationship, which struggles on in the survivor’s mind toward some resolution it may never find.” – Gene’s voice over says at the end.

This is a sad, but realistic film. There is no happy ending possible. That’s how life often is.