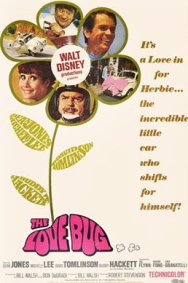 Technically, the film was released in late December 1968, but most of the world didn’t see it until the following January. The Love Bug is one of the most successful Disney films, when the budget is compared to the gross earnings ($50M box office on a $5M budget), and the number of sequels that followed.

Fifty years after release, The Love Bug is still a funny and charming film. You don’t have to be a kid to enjoy it. In fact, it’s probably not sophisticated enough for kids.

The film contains a lot of physical, slapstick humor, mainly involving the car which squirts oil on the bad guy, does wheelies, skips across a pond, performs impossible car movements and exhibits human emotions.  It’s a lighthearted tale, playing on the “love” theme of the late 1960s, with just a dash of hippies, but mainly very square characters.

The Disney “A Team” brought the film to the screen. Based on a story by Gordon Buford, Don DaGradi and Bill Walsh wrote the screenplay, with Walsh producing, and veteran Disney go-to-man Robert Stevenson in the director’s chair. These three worked together on many Disney films  including Mary Poppins.

The Love Bug began development while Walt Disney was still alive but was finished after his death, but was a great part of his legacy.

Disney’s favorite leading man, Dean Jones, starred as Jim Douglas, a down and out race car driver who buys Herbie, the Love Bug. Herbie actually picks Jim, who is accused of stealing Herbie and ends up buying the car on installments to avoid being arrested. Herbie is a 1964 Volkswagon Beetle that Jim decides to make into a race car.

Jim and Carole Bennet (Michele Lee), the sales person, quickly discover that Herbie has a mind of his own, with some help by Tennessee Steinmetz (Buddy Hackett), Jim’s mechanic. “I think I can make someone of that sad little bucket of bolts,” Jim says. Tennessee has a kinder heart, telling Herbie, “I’m your friend.”

Jim and Herbie have an interesting relationship throughout the film.  Jim has a bit of an ego, and at times it gets the best of him.

In his first race, Jim and Herbie impress everyone, including the import car dealer who sold Herbie to Jim, winning the race by a nose. Jim gives himself credit for the victory, but Tennessee knows it was mostly Herbie. Thorndyke (David Tomlinson), the import car dealer, offers to buy back the car.

Thorndyke makes a wager with Jim for the next race, betting on Herbie’s ownership. Thorndyke, like Jim, has a bit of an ego problem.  Thorndyke is also a race driver and will drive against him in a fancy Jaguar. Thorndyke gets out to a big lead but Herbie closes the distance.  Thorndyke plays dirty to keep Herbie from passing, but Herbie won’t be deterred, winning the race.

Thorndyke and Jim square off on numerous upcoming races, which Herbie wins. Jim enjoys his celebrity status, a bit too much for Carole, who won’t admit taking liking to Jim.

Thorndyke asks Carole to make a date with Jim, which she has already done when Jim calls her. Thorndyke wants her to get to know him, under the pretense of recruiting him to join their team.  Thorndyke as ulterior motives.  While Jim and Carole are out, Thorndyke drops by to see Herbie, getting Tennessee drunk and sabotaging Herbie with Irish Coffee.

Jim, believing that the racing success is all him, brings home a new Lamborghini.  Carole and Tennessee have given Herbie a tuneup.  Herbie, finding the Lamborghini, takes out his aggression on the new car,  wrecking it. In anger, Jim hits Herbie with a shovel, sending him off. Thorndyke tries to buy Herbie. Jim and Thorndyke each try to find Herbie in the darkness of San Francisco. Thorndyke finds it first and intends to destroy it, but Herbie gets other ideas and busts out of Thorndyke’s garage.

Being chased, Herbie creates damage to a local business, owned by racing enthusiast Tang Wu. At the police station, Jim is presented with a bill for damages. Tennessee negotiates a deal with Wu, who becomes the new owner of Herbie, but agrees to let Jim continue to race it. If Herbie wins the upcoming race, Wu can keep the prize money but is to sell Herbie back to Jim for one dollar.

The upcoming El Dorado road race is a long distance race through the mountains, the valley and to Virginia City and back.  Thorndyke teams with Havershaw (Joe Flynn), his right-hand man, while Jim’s team included Carole and Tennessee.  The race is an opportunity for many mishaps including having a bear for a co-driver.

Thorndyke tries to ensure Herbie fails by putting water in the gas tank, and causing Herbie to lose a wheel.  Herbie limps to the mid-point of the race at Virginia City.  Assuming that Herbie is now out of the race, Thorndyke tries to take possession of the car, but Herbie has other ideas, roaring back to life.

Herbie starts the second half of the race in last place.  Catching up, Thorndyke runs Herbie off the road into a tree.  Undeterred, Herbie gets back in the race, but cracks in the car’s frame show up.  Tennessee repairs one crack as another one develops.  The car eventually splits in two sections, with Jim and Carole in the front section and Tennessee in the second section as they near the finish line.  Each section separately heads toward the finish line as Thorndyke approaches.  The three cars are bunched up nearing the finish line, as the rear section of Herbie crosses the finish line first, followed by Thorndyke’s car and then Jim’s section of Herbie.

Tang Wu ends up with Thorndyke’s import dealership, with Thorndyke and Havershaw now oil change technicians, who spray each other in oil.  Tennessee now works for Tang Wu.  Jim and Carole are married, riding off in Herbie, newly refurbished. 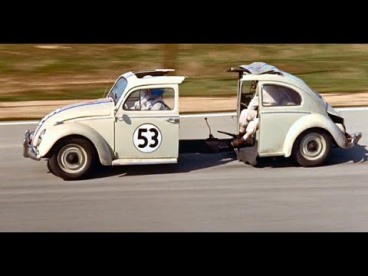 The Love Bug was skillfully directed by Stevenson, whose resume stretched back to the late 1920s as a writer, then began directing British films in the early 1930s.  He was the best of the Disney directors, especially proficient with action films and combining special effects.  He mixes stunt driving sequences with old-school rear-projection effects.  Later Disney films would have a cheapness to them, cut-rate effects, and unimaginative direction.   Stevenson would direct five more Disney films before retiring.  His first Disney film was Johnny Tremain in 1957.

Dean Jones made his Disney film debut with That Darn Cat! in 1965, making a total of ten Disney films.  He often played a befuddled guy, nice enough, but finding himself up against an animal, spunky car or a ghost.  In these films he gets to display a range of emotions, and often comes to regret his anger and frustration at the situations that result.  He’s a good guy but far from perfect.  His confidence and ego sometimes get the most of him, but in the end he always comes through.

Jones’ character Jim, has a competitive relationship with Thorndyke, who is not opposed to chicanery, to get the best of Jim and Herbie.  Jim’s ego gets in the way of his relationship with his friend Tennessee, his budding romance with Carole and his partnership with Herbie.  The races serve to drive the story forward, but it is Jim’s ability to humble his ego, that is the spine of the story.

When you look at the films of 1969, The Love Bug doesn’t seem to fit. The year was marked by adult and visually compelling fare. Somehow, The Love Bug found its audience, maybe because it was so different, but also since it had wit and charm. Two things it still possesses 50 years later.