This is a story that needs more than one installment. The story of Abbey Road the album is quite a tale.

Full disclosure: My favorite Beatles album and in the discussion for best album ever. Everything about this album is iconic, from the cover, to the use of synthesizer to the second side medley.  It’s an album showcasing the Beatles’ maturity and musicianship.

The story of Abbey Road actually begins with the recording of the Let It Be project. These two albums, and film, are intricately intertwined. There are entire books written about this period of time and these albums.  I’ll recommend a book that was written just about the rooftop concert.

There is even a debate. Was Abbey Road the Beatles’ last album? Last recorded album or final album? Think you know the answer? Not so fast. More on that later.

On September 27, Abbey Road gets the remaster and deluxe package re-release to celebrate the anniversary.  Stay tuned for a blog on that later.

The Beatles were a mess in 1968 going into 1969. Their manager had died late in 1967, leaving them untethered without permanent management, they were leading a group of ambitious Apple companies that were bleeding money, their record company royalty deal sucked, and their own publishing was being sold out from under them. And they weren’t getting along; tensions ran deep. By the time Paul McCartney filed the legal papers to dissolve their partnership, all of the other three had at one time quit or suggested the group was finished. Paul got the blame, but the bounds that held the four together had dissolved by themselves. 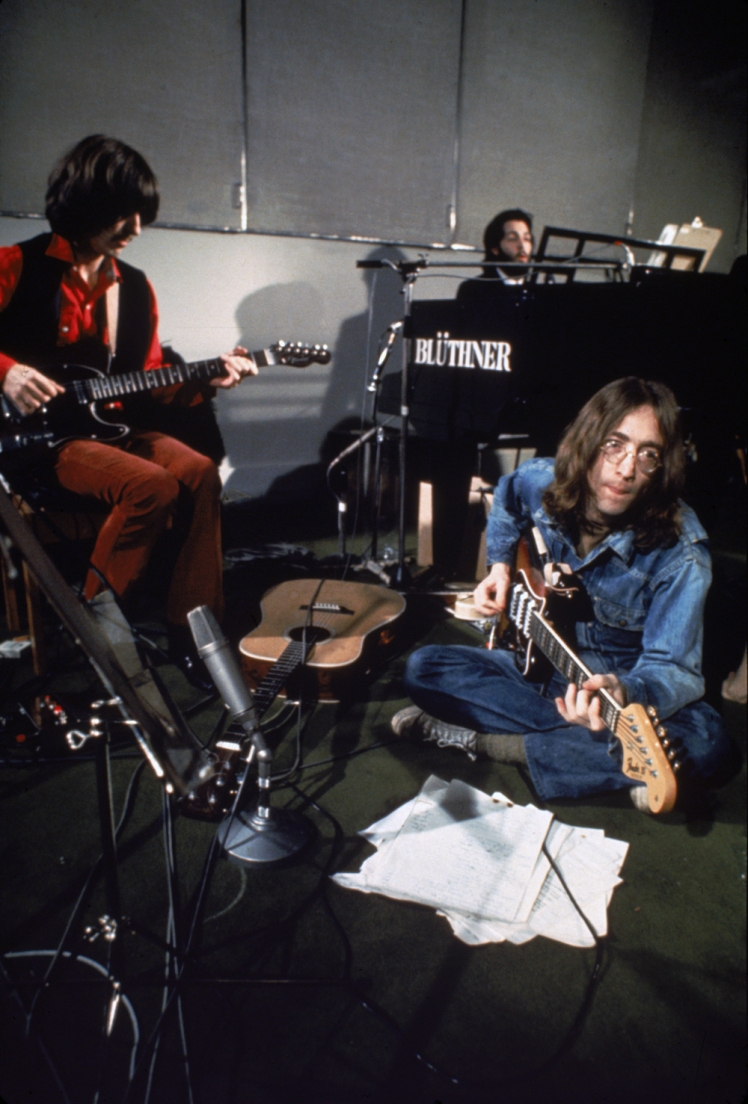 Let It Be was released in 1970, but mostly recorded early 1969, in part for a back to basics album and as a precursor to a live performance or even a tour. The rehearsals, which included new music that would end up on the new album, rock and roll classics, songs that would eventually appear on Abbey Road, and even songs that would emerge on future solo albums. Michael Lindsay-Hogg was hired to film the sessions, which led to the band using a music film stage, instead of a normal recording studio.  Let It Be was not viewed as a regular Beatles album, it was a soundtrack to the film and was being recorded with minimal overdubbing.

Over the course of several months, the Beatles tried recording the album, tentatively called Get Back at Twickenham Studios but gave up and move to a new studio in the basement of Apple Corps, their office building. 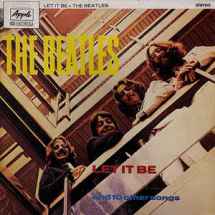 The plan was for the album to be called Get Back and to feature an album cover like the one from their very first album, same location, but with the Beatles as they looked now.  That notion was ditched, but you recall that photo on the second edition of Beatles greatest hits released in the early 1970s.

In the meantime, discussions about their live concert or tour went through many ideas and iterations, many of them pretty crazy (on a ship, at the Pyramids, at an empty stadium), and it was clear the Beatles were fractured as a partnership and would never have survived any kind of tour. In fact, the only concert they could agree on was a 40 minute performance on the rooftop of their building. There were other sessions at other recording studios that took place.

The live performance was to be filmed as the culmination of the recording process.

The compromise to all the outrageous ideas, and the weariness of the recording process was the performance on the rooftop of 3 Savile Row, in the heart of London’s upscale business district. The idea for the rooftop is claimed by many, but most credibly was Glyn Johns was suggested they could play to the city, and not have to travel.

Getting the roof ready for the concert took some unusual effort. Billy Preston’s keyboard had to hoisted through a skylight to the roof. Engineer Alan Parsons was sent to a department store to buy women’s stockings as wind shields for the microphones. Parsons who would go to fame by engineering Dark Side of the Moon, producing Ambrosia and Al Stewart, and co-creative force behind the Alan Parsons Project. But on this day, he was pulling miles of cables and doing a lot of technical grit work.

That January 30, 1969 day was cold and windy, hardly great conditions for a concert. Staying warm was a challenge for the Beatles whose hands were so cold it was hard for them to play.

Other than the Beatles and Preston, only 15 other people were present on the roof until the coppers arrived to shut it down because of noise complaints.

Ken Mansfield was on the roof that day, head of Apple Records for the U.S. His book, The Roof: The Beatles Final Concert, is a great read.

After handing the entire project over to engineer Glyn Johns to construct an album of material, the Beatles soon began work in spring 1969 on a more traditional album, which would be Abbey Road. They brought George Martin back as producer and agreed to surrender their musical egos to Martin’s guidance. Some of the songs that emerged on the album had begun during the Let It Be sessions.

Part of the tension in the group had to do with songwriting.  Lennon and McCartney were expected to provide the lion’s share of songs.  McCartney delivered, but Lennon’s contribution to Let It Be was minimal, and McCartney didn’t hide his irritation.  Lennon, who had been prolific during The White Album sessions, was in his new relationship with Yoko and was preoccupied with many issues.  Starr didn’t contributed anything that made the cut for Let It Be, but would for Abbey Road.

The biggest issue was Harrison, who was busy writing songs, but having a major problem getting any serious consideration from Lennon and McCartney.  Many of the songs he wrote would appear on his solo albums because Lennon and McCartney refused to work on them. Lennon would in fact, skip entire sessions where Harrison songs would be the focus.  For Let It Be, Harrison’s contributions turned out to be the bluesy “For You Blue” (with Lennon on the slide guitar) and “I Me Mine,” only a half-finished song.  For trivia fans, “I Me Mine” was the very last Beatles song completed for Let It Be, making it the last Beatles song until the Anthology project.

Even George Martin, in several interviews admitted the difficulty Harrison had in getting his songs considered.  He said that Harrison’s songs hadn’t been very good, but were getting better.  Reflecting back, Martin admitted that even he was condescending, and it was hard on Harrison, who was competing with the talent of Lennon and McCartney.

Lennon’s one really good song for Let It Be was “Don’t Let Me Down,” which didn’t make the album, but was released as a B-side, and considered to be one of Lennon’s best later stage Beatles songs.  “Across the Universe” was a song they had previously recorded, but given away for a charitable cause. “I Want You (She’s So Heavy)” was worked during Let It Be, on but held over.

Glyn Johns came up with several versions of Let It Be, but all were rejected by the Beatles. Lennon eventually gave the tapes to producer Phil Spector who added strings and choir to several tracks including McCartney’s “The Long and Winding Road.” McCartney was livid, and it added to the bad blood between him and the other Beatles.  The other Beatles wanted McCartney solo album’s release bumped, so as to not complete with the release of Let It Be.  Starr was the one who broached the subject with McCartney, who almost came to blows with his bandmate.

Even after Abbey Road was released, work continued on Let It Be, as songs were remixed and additional instrumentation added. So much for the intent to produce a “live” and intimate recording with no overdubbing.

In November 2003, a new version of Let It Be was released. Supervised by McCartney, and approved by Starr and Harrison (before his death), Let It Be…Naked. The strings and Spectorization was removed. “Don’t Let Me Down” was added, replacing “Maggie Mae” and ” Dig It.”

“Starr said in 2003: “I told him [McCartney] on the phone [recently], ‘You’re bloody right again: It sounds great without Phil.’ Which it does. Now we’ll have to put up with him telling us over and over again, ‘I told you.'”

Glyn Johns who engineered and mixed the original tapes said: “I am pleased that the re-release will become available to the general public. “My version of [the song] ‘Get Back’ actually was released fairly quickly as a single,” he says. “And my version of [the song] ‘Let It Be’ was also released, before Phil Spector puked all over it. And I hope you quote me on that. If you hear ‘The Long and Winding Road’ without all that schlock on it, it’s fabulous just like it is.”

The delineation between Let It Be and Abbey Road is so nebulous, as recording overlapped.  One thing was clear, the Beatles went forward with Abbey Road having a completely different vibe. In his book, Abbey Road/Let It Be/The Beatles, Peter Doggett quotes Lennon in an interview as saying. “It’s like an unfinished rehearsal for the show that we never did.”  Which may explain why the Beatles weren’t happy when hearing the Glyn Johns’ mixes, and why Lennon brought in Phil Spector.

In July 1969, the Beatles started work at EMI studios, located on Abbey Road, on their new album.