Apocalypse Now in outer space. Without the Playboy Bunnies.  The end.  Seriously, that’s the film’s narrative.  Read on.

Ad Astra is a dazzling film, but not overwhelmingly so. Films that take place in outer space tend to be eye candy, especially films meant to be huge budget releases. Ad Astra isn’t 2001: A Space Odyssey or Star Trek: The Motion Picture, where the intent was to show off new photographic and computer imagery in excruciating detail. The visuals here are the backdrop, not the main show.  There are key scenes where you get the full impact of space, these are when the Brad Pitt character is outside of his various space crafts.

I’ve heard people say that Ad Astra is slow-moving, and I found it so in places.  I was prepared for a story-based film, so I let it unfold, essentially through Brad Pitt’s eyes. His character, Major Roy McBride, is selected for the mission to Neptune, where a source of electromagnetic bursts threatens life in the solar system, human life.

McBride is selected for two reasons. First, his blood pressure stays at a low rate, especially under extreme stress. Even the breakup of his marriage, and a fall from the space antenna doesn’t move the needle. He’s rock solid. The second reason is the source of the bursts are tied to McBride’s father, who commanded a space flight to Neptune and it’s suspected of being the source of the bursts. The younger McBride, thought his father was dead. This sets up an internal struggle for McBride, which will test that low blood pressure score.

Young McBride is supposed to travel covertly to Mars, by way of the Moon, where the Space Command wants him to send a radio message to his father, hoping for contact. Life on the moon is like the Wild West, where his convoy is attacked by pirates with a deadly shootout, McBride barely makes it to his space flight. His traveling companion, a wise old astronaut, played by Donald Sutherland, can’t go the distance and is left behind. Traveling through the solar system is physically and psychologically dangerous, something McBride almost doesn’t survive.

Sounds like a reasonable basis for a film. Here are the parallels to Apocalypse Now: a secret mission; into dangerous territory, to stop a man who may have gone insane; and a man who poses a significant threat to national interests.

Ad Astra is a cerebral experience, Apocalypse Now was more of an existential one. For Maj. McBride, his father is a mystery, he left early in the son’s life, and the memories the son has keep emerging during the space flight. His father was cold and distant, and focused on his work. The son is the same way, although he married, but did not have any children. The son’s marriage suffered, while he didn’t abandon his wife like his father did with his family, the son put his work first and she eventually gave up.  The question never answered was why either the father, and especially the son, had a family if neither was going to be invested in it.

Ad Astra is a solemn, downbeat film. The premise of the film is about stopping possible catastrophe, as well as the sad nature of every McBride relationship. The viewer can see the pain grow in Pitt’s character during the film as he learns and experiences more. His face is often blank, but later turns to restrained anguish.  The younger McBride hopes he can bring his father back, perhaps foolishly, but it’s a son’s hope to regenerate their relationship. 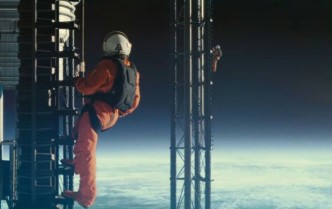 Maj. McBride is a professional soldier/astronaut who must complete his mission even when it involves a very personal matter.  The Major is not supposed to go to Neptune, that’s a decision he makes, against orders, with tragic results.

We’ve seen Pitt in serious roles before, Fury and Allied, for example. You get the cold, piercing performance. His emotional temperature here is on a different level.  Now 55, Pitt shows more facial lines and tell-tale signs of age, though he’s as youthful as one can be at that age.  You don’t get that radiant smile or the penetrating blue eyes.  Every effort is made to make him look ordinary, if that’s remotely possible.

Ad Astra is not a classic, but it is a very good film.  The viewer must be willing to invest the emotional energy to the film’s underlying emotional narrative.  Visually, the film gives you a muted sense of wonderment.  It’s not a thrill ride, space is daunting and dangerous.  McBride’s fall from the space antenna is spectacular and harrowing.  The view of the Moon is dark and foreboding, as travel out of the safe zone is perilous.  The viewer does not get an uplifting sense of space as a frontier.  The search for other life in the solar system only comes back as we’re alone, and we are our worst enemy.

On a budget of nearly $100 million, the film has been soft at the box office.  There were 20 people in the screening I attended.  Experts project the film will not make back it’s negative and marketing cost. Rottontomatoes.com had an 83 percent critics review but only a 40 percent audience score.  I found the film to be entertaining but difficult to penetrate at times, cold and unfriendly, like space itself.  Strangely, I liked it.