Spoiler alert: I loved this film.

Western Stars is the filmed concert performance of Bruce Springsteen’s last studio album.  Springsteen knew the logistics of a tour in support of this personal and expansive album would be prohibitive.  The album in wrapped in orchestral backing, and taking an orchestra on the road? Not going to happen.  So Springsteen had an intriguing idea: film a live concert with an orchestra.  Wait, it gets better.  Film vignettes for between the song performances where Springsteen could use imagery and his words to give insight into the each song and relate how in ties-n with his own life.

The result is incredible.  Not a concert film and not a traditional narrative film, it’s both. Springsteen co-directed the film and wrote the vignettes.  It was filmed in the 100 year-old barn on his New Jersey horse ranch over the course of several days.  The vignettes were film in the Western part of the country.

This is an intimate film in several ways.  Springsteen’s vignettes are quite personal in his life story, photos and videos of his youth and his family, his lessons learned and hard truths, with his optimism and sage advice.  Springsteen includes video from his and Scialfa’s honeymoon. The concert is filmed to capture each performance from above, on stage and often with Springsteen in close-up.  The concert footage is spectacular and you’ve never seen Springsteen as intimately filmed as he is here.  The songs jump out at your, the sound is incredible and the orchestral arrangements are first-rate, you feel these songs.

The film is intimate in another way: Springsteen and his wife, Patty Scialfa.  She in onstage for most of the songs, playing guitar and signing backup.  On two songs in particular, she shares his microphone and the two are connected physically and emotionally.  It is so intimate that the viewer almost feels intruding in what is happening between them.  They are connected by over 30 years of life and it shows.  It is magical.  I watched with a lump in my throat as they sang together,  He put his arm around her after the song.  How can you watch that and not be touched.

The songs from the album of the same name are about people who have regrets, bad luck and who’s time is running out.  As Springsteen sings them, they are almost confessional. “Everybody’s broken in some way,” he says in one vignette.  He talks of his own battles, especially early in life, to find his way, and to figure out how to love and to make it last.  He give credit to his family, especially his wife.  This is not a sappy revelation, this a man of 70 years who understands the hard road of life and the ongoing work it takes.  Springsteen’s voice is not the angry, strong, clean voice of his Born to Run days.  It still has the power, but it has a worn and reflective-ness that find the grooves and subtext in the songs, especially the weariness of Western Stars. 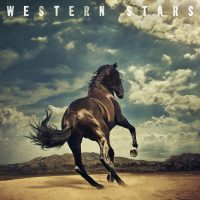 The songs are not terribly different from the originals although the arrangements are more expansive and the songs are longer in places.  There are no ten minute “Born to Run” extended plays.  These songs were not written and recorded with big instrumental solos, nor are the any in the live versions.  They aren’t needed.  Springsteen plays an acoustic guitar throughout the concert, barely doing more than strumming, he finger-picks an intro, but it is his band and the orchestra doing the heavy-lifting musically.  Springsteen is on fire as a vocalist.

The best songs are “There Goes My Miracle,” “Stones” and “Sundown.”  Actually, every song is vivid, melodic and powerful.  Western Stars is more a vocalist’s album than any other Springsteen collection.  Why? Because he must keep up and embellish the strong musical songscape, to give meaning and life to those world-weary characters he wrote about.

Springsteen, in the footage that played after the credits said he always thought in terms of orchestral backing when he wrote his rock songs.  This made the songs bigger, he said.

Western Stars, the studio album, reached number two on the Billboard Rock Chart and number one on the Adult Chart.

I read a couple of reviews of the film and they were not kind, but rottentomatoes.com gave it a 90 percent (critics) and 91 percent (audience) score respectively.  One of the reviews said casual fans will ignore it and hardcore fans would be disappointed.  I’m somewhere between casual and hardcore and I found much to enjoy. Apparently those comprising the 90 percent felt the same way. Westerns Stars will stir your emotions, entertain and give you something to think about.  I’m proof of that.