You might be thinking, who are the Tubes?  Ever heard of “She’s a Beauty” or “Tip of My Tongue” or “Monkey Time” or “Talk to You Later” or “Don’t Want to Wait Anymore”?

On the weirder side: “Attack of the 50 Foot Woman” or “Wild Women of Wongo” or “Mondo Bondage” or “Don’t Touch Me There”?

The Tubes in their punk days and their button-down successful period.

The Tubes hail from San Francisco in the mid 1970s.  Were they a punk rock band or a shock-rock show that delighted in strange musical adaptions and weird on-stage theatrics?  They may have been both in the beginning.  In a few years they harnessed their rough sound enough to have a few radio hits, courtesy of Todd Rundgren and then up-and-coming pop producer, David Foster, who Fosterized their sound, much like he would do with Chicago. 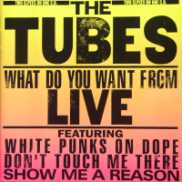 The first I every heard of the Tubes was on a very unusual live album, What Do You Want From Live? (1978) of their cabaret-style live show recorded in London.  This album really marked the transition from the daring, punked-up trashy style of their music to a more stream-lined approach that Rundgren would give them.  Remote Control, the album that followed, had a theme of television control. “Prime Time” was a thumping, synthesizer song that got some airplay.  Album themes were standard business with the Tubes, you would see it going forward.  Even into their fifth decade, the Tubes have not lost their theatrical flair.

Their next album was on a new record label after they were dropped from A&M Records.   The Completion Backward Principle (1981), produced by David Foster, and aimed to expand their audience.  “Talk to You Later” and “Don’t Want to Wait Anymore” charted and somehow blended their rambunctious sound with more studio polish.  Foster brought in outside musicians, those he trusted and had worked with.  Steve Lukather (TOTO) was one who played and added his songwriting skill.

Outside Inside followed in 1983, again produced by Foster. Again, the album sold well and made a decent showing on the charts. “She’s a Beauty” was a top ten chart hit and number one on the rock singles chart.  This new thing called MTV played a video of the song, which helped.

This brings us to Love Bomb (1985), the triumphant album that broke up the band, for a number of years.

After two albums with the controlling David Foster as producer, The Tubes returned to the equally controlling Todd Rundgren at the control board.  This album was doomed before it was heard by the public.  The marriage of The Tubes and Rundgren was a difficult one and I wonder why they would become co-owners of a recording studio and sink deeper in debt.  Touring was always a costly one for The Tubes whose lavish productions seemed to push them into debt.  Capitol Records dropped them, failed to promote the album, and provided no financial support for their tour, so The Tubes financed it themselves.  The Tubes broke up.  Drummer Prairie Prince has played with Rundgren ever since.  Singer Fee Waybill, went solo, and other band members went on to various things.  Years later, the core musicians would re-form the band.  Vince Welnick, Tubes keyboard player, joined Rundgren’s band before going to The Grateful Dead in 1990.  After being diagnosed with cancer, Welnick took his own life.

Love Bomb is an interesting album.  Savaged by many critics for going commercial, it is The Tubes most accessible album and contains some of their best songwriting.  It is their last major record label release and a coda to the original band.  It peaked at number 87 on the charts, which is surprising considering how little promotion Capitol gave the record.

The album seems designed to be united in concept, but I can’t discern one.  The music would suggest an effort to link what would have been side two in the old days.

“Piece by Piece” – 4:25  Similar in style to “She’s A Beauty.”  A rocking song, lots of guitars, but Fee delivers a soulful vocal performance.  This song should have been a hit.  Excellent guitar solo.

“Stella” – 4:12   A rousing, pounding song to Stella.  This might have been a song on a Meatloaf album (Rundgren was also producer), it has a strange musical interlude in the middle.

“Come as You Are” – 3:41  Sounds eerily familiar to songs on the The Completion Backward Principle. A very polished ballad.  Nicely written, but the production begs to be better.

“One Good Reason” – 4:06  Another fine song, an upbeat rocker with shredding guitars in the background.  A better mix would have unleashed some of the elements that seem a bit buried in the sound.

“Bora Bora 2000/Love Bomb” – 4:31  Pounding percussion on a native song, then it ticks into the groove that becomes “Love Bomb.”  A bit of a silly arrangement, but strangeness defines the Tubes.  “Love Bomb” bounces around in style changes.

“Night People” – 2:24  One of the best songs on the album, great synth beat and smooth, melodic vocals.  Again, this could have been a song that attracted attention with a better production.

“Say Hey” – 2:28  “Night People” segues into this song.  A chatting groove over a a keyboard riff that repeats.  A slight song but entertaining.

“Eyes” – 3:48  Again, essentially a segue from the previous song.  A synth groove powers this song.  This has the makings of  a really good song, but the arrangement could have been better.  These songs almost form a suite of songs.

“Muscle Girls” – 0:56  An instrumental, a bit of a studio jam.  This song doesn’t add to the overall quality of the album.

“Theme from a Wooly Place” (Wooly Bully/Theme from A Summer Place) – 0:46  Another song fragment, not really adding anything.  Sounds like something off of their live album from the old days.

“Feel It” – 4:08  Another R&B flavored song with a strong groove.  One of the better produced songs in the set.  You’ll notice the familiar beat from “For a Song.”

“Night People (Reprise)” – 1:22  A beat-driven version to serve as the outro for the album.

This album begs to be played during a single listen, the songs seem to blend together by design, not just a physical segues, but their arrangements seem written to connect.

If you are a Tubes fan, this may the album you’ve never heard of.  Rundgren’s records usually sound like they are recorded in a tin can, lots of compression.  Rundgren usually works up songwriting credit for artists he works with, as he does here.  The songs and performances are great, but the production and mixing hinders many of these songs.