One of the most enjoyable books in my collection is Paul and Me, by A.E. Hotchner. The subtitle is: 53 Years of Adventures and Misadventures With My Pal Paul Newman. 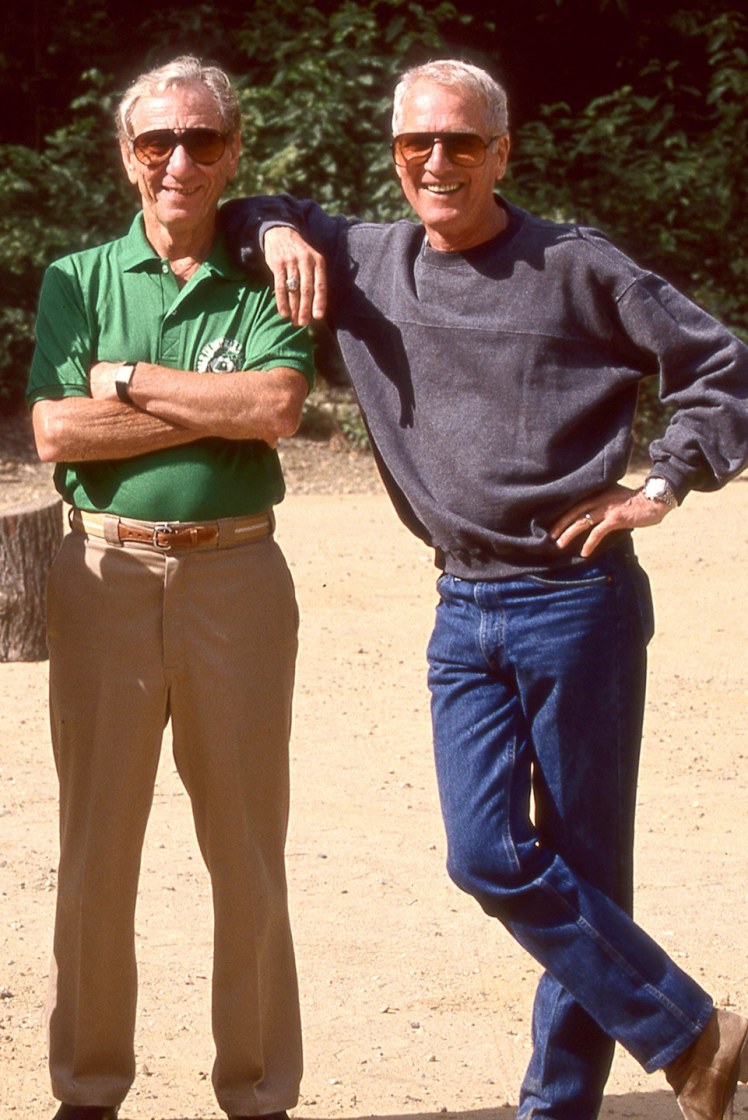 These two guys were neighbors, but had known each other since they worked together on a television project in the 1950s. That experience cemented their friendship. Hotchner was the writer of the television script; he would go on the write novels, non-fiction books, and various film and television screenplays. His most daring and rewarding job was as Newman’s accomplice in half a century of mischief.

Hotchner was also a co-founder of Newman’s Own, the food company that gave birth to many products and hundreds of millions of dollars given to charity.

Hotchner’s book shows Newman as few knew him. There is not a lot of glitz and Hollywood in the book. Newman viewed stardom as a bother, but found it helpful when they launched the salad dressing, then spaghetti sauce, popcorn and various other products; and when he called in favors to aid his charity projects.

Experiencing the Newman, that only his close friends and family knew, is great fun for an outsider. The Newman that Hotchner describes seems close to the freewheeling and irascible Butch Cassidy and Reggie Dunlop (Slap Shot) film characters. Movie success gave Newman financial freedom to pursue racing, boating, traveling, owning a jet and other expensive hobbies. His adventurous personality and mischievous attitude didn’t require money. Having wealth only widened the boundaries of his playing field.

Newman’s Own allowed Newman to be very philanthropic, but by nature he was a very giving person.  Here are some excerpts from the book.

“Paul often sent funds without being asked, and often anonymously, to actors he knew were down on their luck, since he always tried to avoid what he called ‘noisy philanthropy.'”

“At another race, Paul was sideswiped, causing his car to roll over and catch on fire.  Trapped in his seat, the flames advancing in back of him, he kicked out the windshield and escaped before the car went up in flames.”

An A list actor, Newman was sent tons of scripts. Mostly he made good choices, but not always. His career had peaks and valleys, and rarely did he take a film just for the money.

“Paul was very selective about which of the countless script submitted to him he chose.  ‘ Of all the scripts I’ve turned down,’ Paul told me, ‘the only two I regret are Jaws, because I didn’t think they could make a Hollywood fake shark believable, and All That Jazz, because it called for dancing and I couldn’t dance.  A year later, however, I discovered I could dance, but they were already filming.'”

Newman was known for pulling practical jokes, particularly with Robert Redford and film directors he worked with.  One joke, Newman pulled on director Otto Preminger on the set of Exodus, backfired.  There was a scene with Newman fighting on the balcony of a high-rise building, and Newman had to knock-out the villain.  “By now Preminger, directing from a unit on the ground, saw the villain knock Paul (actually a dummy) off the balcony, the dummy spinning downward and landing with an ominous splat  Preminger was so shaken that he collapsed and required first aid,” Hotchner wrote.

Hotchner saw his friend go through many changes in half a century of friendship.

“I think that age fifty was more than just a number for Paul.  I think it triggered reflection and longing and appraisal of those fifty years and what might lie ahead.  After fifty, Paul became less introverted and more exposed to openly involving himself in things that had meaning for him.”

Newman’s Own took a prominent place in the back-end of Newman’s life.  Once they grabbed onto the idea of marketing the salad dressing, he and Hotchner ran with it, and kept running until Newman’s health declined.  “Let’s do it. An okay label, a sexy bottle, someone to bottle it, and see if we can make a buck or two,” Newman said.  That’s how the empire started, hoping to make a few bucks.

Introducing a new product is normally very expensive. Advisers told Newman that the major cost to start up a new product, including focus groups and brand testing, was hundreds of thousands of dollars.  Newman had a much less expensive idea. “Okay, tell you what,” Newman said. “We’ll gather a dozen of our friends and have a blind taste-testing.  We’ll put all the big name brands in numbered saucers, ours in the mix, and have them rated from one to ten.  Then let’s you and me put up twenty thousand dollars each, and when that’s gone, we go out of business.”  That was Newman’s idea.

Newman’s Own products were intended to be natural. Newman was against preservatives, coloring, gum and other additives.  He was insistent that his salad dressing would not include them, even if their absence sabotaged the shelf life for the product.  Their dressing went to the chemist for testing and they discovered something surprising.  Their product was projected to last longer than the name brands with preservatives.  The answer was the mustard seed ingredient.  “In the long history of bottled dressings no one had ever used mustard seeds, which, when crushed, emitted a natural gum that thoroughly preserved the contents,” Hotchner wrote.

Newman and Hotchner needed an office for their new business, so they found a room across from Newman’s attorney’s office.  Being low on their remaining funds, and being that Newman had closed his swimming pool for the season, he used his pool furniture for their office. “Keeping a beach umbrella over our shared desk (his picnic table).  Ping-pong table became our conference table,” Hotchner said.

Newman invited a food processing plant owner in for a meeting to discuss producing their spaghetti sauce.  The man sat in a beach chair in their office.  The first thing he asked was if they had a marketing survey. Nope.  A business plan? Nope.  A budget? Nope. A strategy for introducing the product? Nope. “And you plan to fly into this new venture absolutely blind?” he asked.  Newman responded, “Our business is just part of life’s great folly. My philosophy is: Stay loose, men, keep ’em off-balance.”

Newman wrote his own bottle package labels.  And he intended to have some fun with them. Here’s the one for Roasted Garlic Peppers.

Once upon a time in the darkest of ages there lived a green grocer named Newmanezzer, who was famous for his virile garlic and voluptuous peppers.  One starlit night, the Prince of the Garlic Bin climbed the fence and courted Princess Gwen Pepper in a heated mating dance that lasted a fortnight and would up with a royal nuptial.  A month later, as noted in the Baby Book of Records, Princess Gwen become the first stuffed pepper  It is her progeny who have danced their way into this bottle and onto your pasta – Newt Newmanezeer, XVI

Newman and Hotchner vowed to donate every dime of profit to those in need. In the first year, $397,000 was distribute to charities.  Many organizations and programs had written to Newman with various needs.  Each December, Newman and Hotchner went through the requests and decided where the money would go.  Sister Carol Putnam, a Sacred Heart nun who ran a school in Florida needed money for a new bus.  She ran a program to educate children of migrant farm-workers.  Without the bus, the kids wouldn’t go to school and would instead work in the fields next to their parents. Her bus had been condemned by the state.  Newman called her to find out the school might have to close.  He then called the bus company to order a new bus, but was told there was a backlog of six months, which wouldn’t help the school.  Newman asked to speak to the company’s CEO.  The new bus was delivered two days later.  “When a local reporter called Paul about the bus, Paul told him, ‘I never thought I’d get into science, but being able to turn salad dressing into a school bus – that’s the kind of chemistry that tickles the fancy.'”

In 1985, they hit on another idea, to create a camp for kids with cancer.  The Hole in the Wall Camp. This was not just a summer camp, but one with the medical and support services for sick kids. They put $5 million into the initial financing and raised the other $5 million needed.  Finally, in 1987, they were ready to begin.  Newman selected the property and was actively involved in hiring the business and professional staff.  He pushed the building project to be open within a year of the concept.

This initial camp led to more camps, here and abroad.  Newman built a cabin on the opposite side of the lake so he and wife Joanne could visit their camp, and have lunch with the kids each day.

In 1992, Newman and his wife were recognized with the Kennedy Center Honor.  As a part of his recognition, he was surprised, kids from the camp singing, “If There Were More People Like You,” a song performed at each camp gala. Hotchner wrote that Newman was visibly moved by the gesture.

Newman had adopted a policy of not accepting awards for his charitable work. He didn’t want the publicity.  The Canadian government wanted to honor him, a recognition bestowed on Mother Teresa and the Pope, but Newman turned it down.  A Canadian official asked why he would turn down a honor given to the Pope, Newman replied, “Maybe he needed it more than I do.”

Toward the end of his life, Newman planned the transition of Newman’s Own from him and Hotchner to a professional business team, a board of directors and a charitable foundation. He knew it was time to make the move.

Movies might be Newman’s artistic legacy, but the charitable work was his human legacy.  To date, more than half a billion dollars has been donated to charities from Newman’s Own products.