Storytelling folk/pop singer-songwriters made a big splash in the early 1970s. This was the reflective, sensitive era where soft rock was the genre for these troubadours. They reached deep into their souls to harness experiences and characters, and they spilled out onto radio, packed concert halls and made gold records.

Two of the best were Jim Croce and Harry Chapin. They spent years working in clubs and struggling to make a name. Finally, when they did, their time was soon up, both killed in tragic accidents, their voices silenced. 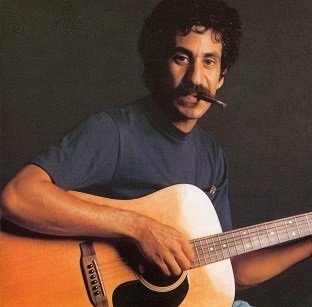 Don’t mess around with Jim. Jim Croce’s life was over before his career had started.  Who can forget “Time in a Bottle”, “I’ve Got a Name”, “I Have to Say I Love You in a Song”, “Operator” or “Bad, Bad, Leroy Brown”? He recorded his first big album in 1972 and died the very next year. He was 30 years old and even though he was starting to get songs played on the radio, he spent most of his 20s struggling, and turning some of his struggles into songs. The songs he gave us came from his personal journey.

According to Croce’s website, his early years after college, were pretty lean.  He played on the coffeehouse circuit, playing clubs around New York City.  He and wife Ingrid moved to the small town of Lyndell, Pennsylvania, where they had a son, and enjoyed the rustic life of baking bread, and growing and canning fruits and vegetables.  Later, he went back to construction work to make ends meet and supplemented his income by doing studio work, mostly background vocals on commercials.

Croce, and his group, had performed a concert Thursday night at Northwestern Louisiana State College, before 2,000 laughing and cheering students at Prather Coliseum, and were leaving for a Friday appearance at Austin College in Sherman, Tex.
“They were leaving the airport and got possibly 250 yards south of the runway, 30 feet in the air, and hit this tree,” Sheriff Sam James said. “For some reason they didn’t gain altitude fast enough.”
Investigators said the tree, a large pecan, was the only tree for hundreds of yards.

His widow, Ingrid, Croce was to guest-host The Tonight Show for Johnny Carson and there were discussions about a movie with Cheech Marin.  She said that Croce did not like the music business much, but it was the joy of singing in front of fans that gave him satisfaction.  Ten long years of struggle was paying off as his songs were finally heard on the radio and he was performing to sold-out venues.

Croce and family had just moved to San Diego to begin a new life, and had talked of opening a restaurant where their singer-songwriter friends could perform.  Ingrid Croce eventually opened the restaurant where it operated for many years.

The memory I have of Mr. Croce. When I was a young boy I would love to take evening rides in the car with my mother. We would drive up and down Chicago Avenue with its old time streetlights and quiet neighborhoods. It was our escape from an alcoholic and abusive father. We would talk about having a quiet home in this neighborhood. Looking at the large Oak and Maple trees, people sitting on their front porches would wave as we drove by. The thing that brings me to this is every time I hear “Time in a Bottle.” As soon as I hear it, I automatically get bought back to that memory of my mother and I driving and sharing our dreams with each other. I love that song and it never fails to bring a smile to my face. – A fan mail letter on Jim’s website. 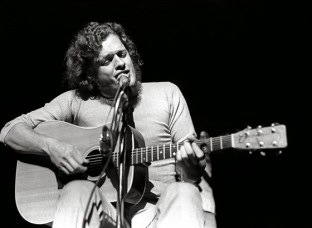 Harry Chapin was a balladeer, his songs were stories of his life. Telling stories was something he was good at.  Before devoting himself to music, Chapin worked in documentary film, even having one of his projects, Legendary Champions (1968) nominated for an Academy Award.  Chapin worked the club circuit in New York City before signing a huge recording contract with Electra Records.

His first album, Head & Tails was released in 1972, selling a million copies, and contained the hit song, “Taxi.”

In 1974, he released his most successful album, Verities and Balderdash, selling over two million copies and contained “Cat’s in the Cradle” and and “I Wanna Learn a Love Song.”

My favorite of his songs was “W-O-L-D,” about an aging disc jockey.  Chapin’s songs, sometimes long by radio standards, received a lot of airplay.

Cat’s in the Cradle

My child arrived just the other day
He came to the world in the usual way
But there were planes to catch and bills to pay
He learned to walk while I was away
And he was talkin’ ‘fore I knew it, and as he grew
He’d say “I’m gonna be like you, Dad
You know I’m gonna be like you”

And the cat’s in the cradle and the silver spoon
Little boy blue and the man on the moon
When you comin’ home, Dad
I don’t know when, but we’ll get together then
You know we’ll have a good time then

Chapin’s strength was in his performing, giving life to his personal songs, although he released an album a year until his death. He performed tirelessly, giving a lot of his money to charitable causes, including combating world hunger.  The Harry Chapin Foundation was created for his charitable work.  In 1986, Chapin was posthumously presented with the Congressional Gold Metal for his work to alleviate world hunger.

In 1981, on his way to perform, his car was hit head-on by a semi truck. He died after suffering a heart attack.

To give an example of Harry’s humanity and humility…….. Years ago We attended a Chapin Concert at the Garden State Arts Center. We took my brother’s friend Steve who had Muscular Dystrophy to the concert. He was supplied with 2 “cheap seat” tickets. Steve was mesmerized and was in in tears at the end of the concert. We took him over to get Harry to autograph his Harry it sucks t-shirt. Of course Harry was surrounded by fans and we couldn’t get close with Steve’s wheelchair. One of Harry’s people saw us stuck in the back and whispered to Harry. Harry immediately excused himself, and came out of the booth and came right over to Steve. He shook Steve’s hand signed his t-shirt and talked to Steve at great length. Steve told Harry he was in the cheap seats tonight and loved it. With tears in his eyes Harry said, “I knew I could count on you my brother.” He then hugged the breathe out of Steve. Steve Was so wired the rest of the night we threatened to make him walk home :). Harry could touch us with a song or a phrase. He stood up for those who could not. – From Harry’s website.