In 1973, the Moody Blues, after finishing Seventh Sojourn and the world tour, essentially took a long break. At the height of their career, it would five years before another group arrived, and it would be the group effort. Whatever musical glue held them together was dissolved. Mike Pinder left the band permanently.

Octave, the album it took a long time to finish, wasn’t a classic like the previous seven. About a third of it is good, the rest, uninspired and lacking in creativity.

This blog is about the solo work that filled the hiatus period of the mid 1970s. Each band member did one or more solo projects

After the Seventh Sojourn tour, the band agreed to a break. They helped to release the compilation two-album set, This is the Moody Blues. Efforts to record another group album failed, so the group splintered into solo projects.

Mike Pinder has relocated to California, married an American and started a family. He recorded an album called The Promise (1976). This album has its moments, but lacks any definitive style.  Pinder alternates between pop-jazz, George Harrison mystical rejects and a couple of R&B flavored tunes.  There isn’t a great deal of emotion or energy here, although he tries. “The Promise” and “Air” are both good.  Pinder contributed some amazing work for the Moodies, and the best songs on Seventh Sojourn were his. If you are looking for examples of his best Moodies work, you won’t find it here, but it is mellow and relaxing.

Flutist Ray Thomas produced two rather interesting, with full orchestral arrangements. From Mighty Oaks (1975) and Hopes, Wishes and Dream (1976) are very different from what you might expect from Thomas, at least in the hands of the Moodies.  These songs are romantic and hopeful, and performed like Richard Harris or Mark Lindsay.  Pop and folk songs with big arrangements, although several songs have rock instruments, they take a backseat to Ray giving his Frankie Valli and the Four Seasons shimmer. Ray also likes country-pop, and dabbles in soft R&B, on the exquisite “Didn’t I.” If you have a quiet evening in front of the fire, these are quite nice, but if you have a buddy over and want to rock-out, pick something else.

Drummer Graeme Edge formed The Graeme Edge Band, featuring Adrian Gurvtiz, releasing two very promising albums. Kick Off Your Muddy Boots and Paradise Ballroom. The Gurvtiz brothers brought some rock and roll chops.  The two albums incorporate a variety of styles including funk, blues and British rock. “Paradise Ballroom” and “Light of Night” are well-worth the listen. These are not classics, but I rate them above the works of Pinder and Thomas.  Not as polished as Hayward and Lodge, but Edge’s band rocks harder. 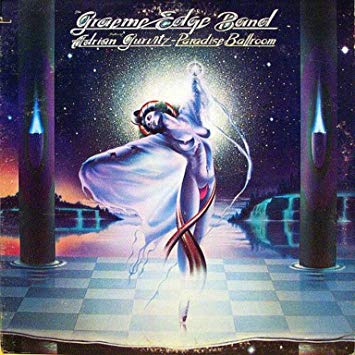 John Lodge and Justin Hayward delivered the closed to the sound of the Moody Blues. Blue Jays (1975) is a very good album by the duo.  Apparently, this was supposed to be a Hayward-Pinder project until Pinder dropped out.  Hayward is the best overall writer in the group with melody and Lodge brings more of the rock and roll muscle.  This would be their only duo project, but together, they would write the majority of future Moody Blues albums.  This is a really fine group of songs.  My only complaint is Hayward’s guitar distortion drenches every song, he must be using a longest sustain in rock history on every song.  He first used this sound on Seventh Sojourn, but a little bit goes a long way.

“Blue Guitar” was a song credited to Hayward/Lodge, but it was Hayward backed by the group, 10cc.  Hayward received a solo album Songwriter, which was quite different from Blue Jays, and actually had some nice songs, some in the spirit of earlier Moodies albums. There were not strong singles but you get orchestras and nice backing tracks. Of the pure Moody solo projects, this is the best one. “Nostradamus,” “Wrong Time, Right Place,” “Raised on Love” and “Doin Time” are solid tracks.  Hayward also contributed vocals to “Forever Autumn,” a wonderful song from the Jeff Wayne’s Musical Version of The War of the Worlds, a 1978 rock opera album.

Lodge released his own solo album, Natural Avenue, which didn’t made a huge impact, it is an attempt to be Leo Sayer or one of the Bee Gees before they discovered disco.  The songs are drenched in orchestra, strings and background singers trying to make this a hip, romantic record.  If he lost the heavy arrangements and added more muscle, the result would have been better.  For the real rock and roller in the group, this is weak.

The solo projects of the Moodies are a mixed bag.  There are some interesting songs on the various album, though none approach the quality of their first seven albums.  Each seemed to follow their own muse, commercial or not. I found it curious the different song styles and arrangements in these projects, from rock and roll to lounge singer, rock instruments to full orchestras. Writing an entire album of music is quite different to contributing a couple of songs her album.  The downside is the absence of other musicians to contribute ideas, add their own musical textures, and be the critic when an idea is not up to snuff.

These boys must have grown up with orchestras because, they tend to use it in their arrangements.  It made sense on Days of Future Past, but they seem in love with strings and woodwinds. Thomas, Hayward and Lodge in particular feature orchestral arrangements on most of their solo work.  Edge used is selectively and Pinder preferred synthesizer and horns in his accompaniment. 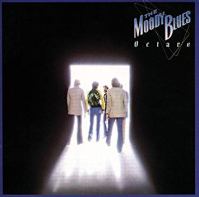 When the group reconvened to record Octave, something was missing.  The album is more style than substance.  Octave was a transition from the classic period to what would become the Moodies as a quartet.  Gone would be the mellotron sound, replaced by the synthesizer and a late 1970s sound, which carried over from their solo projects.

If you like the Moody Blues, these solo albums offer a view inside these five artists.  You aren’t getting Moody Blues sounding albums, although at times it comes close.  What you also find are each of them pursuing music that is very personal and reflects a significant musical expression.