Since it is the Oscar season, here’s an award-winning film. John Ford’s Stagecoach.

This Western is not only regarded as a classic, it changed the genre.  This film wasn’t just great action, it was a compelling story that was intelligent and a dramatic puzzle.  The characters were not cardboard “types” but three dimensional people, with backstories and the occasional wit.  in the 1930s, Westerns were cranked-out by the dozens as serials and second feature fare, and usually not taken seriously as character-driven dramatic films.  There were a few very good Westerns as good films in the decade, but those were the exceptions.  The Western as film art, had arrived.

What’s more Hollywood than throwing a diverse group of people together into a dramatic situation. This format would be repeated often for television and film.  Based on The Stage of Lordsburg by Ernest Haycox, the screenplay was written by Dudley Nichols (Gunga Din, For Whom the Bell Tolls, Bringing Up Baby).

Stagecoach would establishment director John Ford as a top filmmaker and elevate B film actor John Wayne to A list films.  Ford was already a director of note, here he put his artistic stamp on a film.  He entered a very prolific period of his career (Young Mr. Lincoln and Drums Along the Mohawk, were also made in 1939, then he made The Grapes of Wrath and The Long Voyage Home in 1940, and Tobacco Road and How Green Was My Valley in 1941). 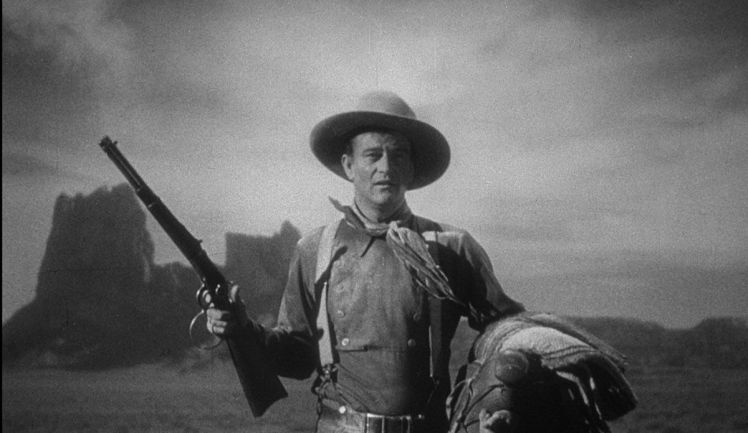 The world of Stagecoach would represent a group of travelers, going through dangerous territory, each with a story.  Some of the drama is revealed early in the film, while other stories play out slowly, as the stagecoach goes along its path hoping to avoid Geronimo. Their journey is from Arizona territory to Lordsburg, New Mexico.  Clearly in the background is Monument Valley, California, the future site of many Westerns, including a few by John Ford.

Stagecoaches often traveled through country where attacks by outlaws or Native Americans were a threat.  The cavalry sometimes protected the stagecoaches, but often it was the driver(s) and passengers who were left to their own devices.  Here, the telegraph has been cut along the way and they have word that Geronimo is attacking White settlements. The cavalry is supposed to accompany the stage for the entire distance, but that does not happen.

The stage is overcrowded, once Ringo is picked up along the way.  There are tensions among the passengers, which are immediately evident. 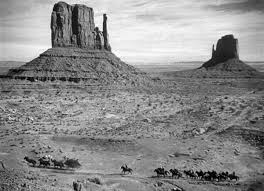 One of the travelers is Gatewood, the banker, “what this country needs is a businessman as President!” Even then, what’s good for banks is good for the country.  However, it turns out that Mr. Gatewood has left town, leaving his wife, who leads the “law and order league,” that chases undesirable people out of town. Gatewood has also absconded with the payroll deposited in his bank. His boarding of the stage on the outskirts of town raises suspicions with the marshal who is riding shotgun.

Dallas, is the woman of questionable morality (saloon girl/prostitute), escorted to the stage, on the bequest of the town’s women, who don’t want her kind, especially around the men. Ringo takes a shine to her, defending her honor around those who are not kind. She might have a bad profession, but she is a good person, helping Mrs. Mallory when she goes into labor.

Dallas: Haven’t I any right to live? What have I done?
Doc: We’re the victims of a foul disease called social prejudice, my child.

Ringo the Kid, is on the run, but headed to Lordsburg, where he aims to settle the score with some men who have killed his family. Ringo falls for Dallas and wants to marry her. He has a ranch in Mexico he wants to share with her. Along the way, Ringo has a chance to escape, but stays around to help the other passengers.

Doc Boone, another member of the town who is asked to leave by the proper women. He is a drunkard and befriends a whiskey salesman also traveling on the stage. Doc, even with his affliction, can see through the pretense of others.

Peacock, the whiskey salesman, is afraid of his own shadow.  Strangely, he is mistaken for a minister.

Mrs. Mallory, traveling from Virginia to meet up with her husband, a cavalry captain, stationed along the route. She is pregnant and delivers along the way at one of the way stations.  She is offended by Dallas, but comes to respect her as a person.

Hatfield, is a professional gambler, of questionable morals, although not on the level of Dallas or the doctor.  He offers some protection to Mrs. Mallory.

Curley, is the marshal, who is traveling to Lordsburg to arrest the men Ringo is intending to confront.  He also places Ringo under arrest.

Buck, is the stage driver, who would rather turn his back and run for safety. He complains about his Mexican wife who’s family he supports.

The drama is ramped up when it is discovered that the cavalry will not be with them for the last part of the trip.  At the way-station, Mrs. Mallory falls and this triggers her labor.  Meanwhile, the way-station employees have runaway, taking the fresh horses.

After Mrs. Mallory delivers her baby, Ringo again asks Dallas to marry him. Dallas arranges to help him escape, but he sees war signals and decided to stay.

When the stage reaches Lee’s Ferry, it has been destroyed, and they have to rig logs to the stagecoach to get it across the river.

The Apaches attack on the journey to Lordsburg, killing Hatfield and wound several of the passengers. As their ammunition runs out, things are looking bleak, when the bugle of the cavalry is heard and they chase away the Apaches.

The stunt work is very exciting, some new tricks for 1939.  An Apache jumping from his horse onto the team of stage horses.  He is shot and falls to the ground between the running horses and goes between the horses and wheels of the stagecoach.  That was a great stunt.  Wait, there is more.  The Ringo character jumps from the stage driver’s seat onto the closest horse, then climbs across the harness to the lead horse where he is able to get them under control.  Another first, in the Western stunt work.

Safely reaching Lordsburg, Ringo asks Curley to see that Dallas gets to his ranch. Ringo then asks for a few minutes to take care of some business. Ringo walks Dallas to the house where she is to stay, on the bad side of town. She is ashamed of her life, and allowed herself to dream of a life with Ringo. She knows it will never work out. Ringo says for her to wait for him.  Luke Plummer and his boys are waiting for Ringo. Dallas is certain that Ringo will be killed.

Plummer and his men have been drinking in the saloon and eager await Ringo.  Out on the street, Ringo stares down Plummer and his men. The shooting starts. Plummer returns to the saloon, but it is soon apparent that he is mortally shot.  Dallas is seen in close-up, as Ringo walks to her and they embrace. Curley and Doc arrive with a buckboard to take Ringo back to prison.  Ringo gets on the wagon, and Dallas is asked if she would like to accompany him for a bit.  Curley and Doc scare the horses and they take off running.  It turns out, they are sending Ringo and Dallas off to their future.

Doc and Curley are pleased with themselves. 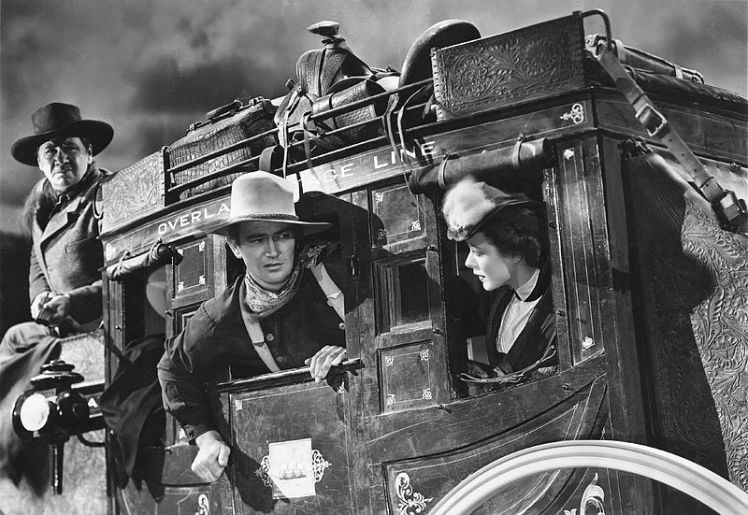 In the Oscar race, the film worn for Best Supporting Actor (Thomas Mitchell) and Musical Score, and nominated for five other awards.  The film has been remade twice.

You might think you’ve seen this film before.  The truth is, tens, maybe hundreds of films have copied the story or the action devices in eighty years.

In 1939, the attitudes toward Native Americans were still stereotyped, and that is true here.  The attitudes toward people of color are shameful. John Ford and John Wayne would make films later in their careers that showed a change of attitude but that would be more than 20 years in the future.