Anyone remember this folk/pop duo that had massive chart success in the early 1970s?

They were know for bright, sensitive songs with tight musical arrangements and smart harmonies.

Jim Seals and Dash Crofts have been working musicians since the late 1950s. After a long road of bands and initial recordings, their second album for Warner Bro’s. in 1972, and fourth album overall, provide their first measure of success.

Summer Breeze sold over one million copies and gave listeners a taste of their soft-rock sound.  The title track reached number 6 on the pop chart, released in late summer 1972. “Hummingbird” was the follow-up single, climbing to number 12 on the chart.

One of the best songs on the album, “The Euphrates” was not even released as a single, proving that the duo wrote deeper music than just radio candy.

Seals & Crofts formed a relationship with guitarist Louie Shelton, a member of The Wrecking Crew, who produced all of their albums. Shelton gained fame as originating the guitar intro for The Monkees’ “Last Train to Clarksville.”  He would also produce a string of popular albums for Art Garfunkel and England Dan & John Ford Coley. 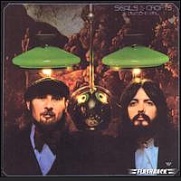 The duo scored again with “Diamond Girl” (1973) with the striking guitar intro and smart harmony vocals, from the album of the same name, which peaked at number four.  “We May Never Pass This Way Again” was released in the summer and rose to number 21.  Another popular song was “Ruby Jean and Billie Lee.”

Unborn Child followed the next year and was controversial, given the lyrics of the title track. Seals & Crofts never shied away from incorporating messages of their faith and beliefs into their music.  This was not popular with tall fans, but as a compromise, the duo often hosted after-concert performances where they played songs incorporating their faith.  “The King of Nothing” was also released as a single but did not break the top forty.

I’ll Play For You was released in May 1975.  The title track was the lead single, followed by “Castles in the Sand.”  Both tracks were moderately successful.  Get Closer followed the next year. The title track was a top ten hit.  Another song “Million Dollar Horse” is one of my favorite tracks by the duo.

Their next studio album did not arrive until 1978, Takin’ It Easy. The album incorporated several songs not written by the duo, prompted by their record company to help boast their commercial appeal.  Soft rock was still popular in the late 1970s, but changing audience tastes and pressures from new artists was making for more competition in the market placed, and especially radio.  Producer Shelton contributed a song that would be their lead single, “You’re the Love,” a track that would reach number 18.  “Takin’ It Easy” failed to generate much interest.  The Longest Road was their last for Warner Bros. and their last album together until 2004.  This album was mostly non-duo written songs.

For most of the decade, Seals & Croftsenjoyed considerable success in a decade that included the singer/songwriter, hard rock, R&B, disco, punk and progressive rock.  They had half a dozen very popular singles, and deeper cuts that showed their songwriting prowess at incorporating dense lyrics and a variety of musical styles.  They certainly used their bluegrass and folk interests, but they were more than long-haired hippy types with acoustic guitars and a mandolin.  Their blended harmonies made them as popular as America, Chicago and the Beach Boys.  They were fortunate to have lined up with Shelton, who was a talented arranger and guitarist.  He recruited the cream of the L.A. session world, members of Toto, Dean Parks, Bob Glaub, Stanley Clark, Joe Sample, Lee Ritenour, Victor Feldman, Ray Parker, Jr., Jim Horn, Jim Gordon, Harvey Mason, Joe Osborn, Jim Keltner and Russ Kunkel.