If you are of a certain age, you remember this film.

Was Thomas Crown the most unlikely Steve McQueen character?  Close.  An Enemy of the People (1978) fills that bill, but Thomas Crown, in his tailored three-piece suit and phi beta kappa key, was certainly a change of pace when it came out. In the chronology of McQueen films, The Thomas Crown Affair was between The Sand Pebbles (1966) and Bullitt (1968).

How do you make a stylish caper film, starring Hollywood’s most famous action star that has very little action, into an interesting film?  Art museums and boardrooms are pretty boring.   Jewison and McQueen injected piloting a glider, polo matches, dune buggy driving and two bank robberies to liven things up.  McQueen obviously plays against type.  He looks good in a tailored suit, and like Paul Newman, can say a ton without saying a word.  The film’s photography and editing intentionally add style and visual excitement.  The film’s music matches the onscreen action and is edited to fully realize the visual and emotional cues of the characters.

Thomas Crown was a very rich and successful investor, who played cricket and drove a dune buggy, but seemed to need an even more dangerous hobby – robbing banks.  Crown was sly and soft spoken, he let his keen sense of the financial markets do his talking.

Crown pulls a bank robbery with no obvious ties to his masterminding the heist.  It might be the perfect crime, until the Boston Police get the help from an insurance investigator.  Faye Dunaway as Vicki Anderson, is the stylish and shrewd investigator who quickly pegs Crown as her prey.  Vicki is not against breaking the law to catch her man; her morals are adaptable.  She’s interested in capturing Crown, but even more interested in being right about  him.  Vicki falls prey to Crown’s charm and his elusiveness.  It is a game of cat and mouse, but it is hard to tell who is which.  Both of these characters have huge egos.

Vicki also captures the eye of Detective Eddie Malone, who just is not in her league.  While she investigates Crown, she falls for him.  Crown romances her while being fully aware she is after him.  Their romance is as much a chest game as when they really a game at his house, their flirting is quite obvious between two master game-players.

Stylishly directed by Norman Jewison, who had just directed In the Heat of the Night and was nominated for an Academy Award for his work.  Jewison assembled an all-star production team.  Hal Ashby, Ralph Winters and Byron Brandt handled the innovative editing. Ashby had won an Academy Award for In the Heat of the Night. Winters had two Academy Awards of his own.   Haskell Wexler was the director of cinematography, capturing the vivid color and stylish photography.  Wexler won two Academy Awards in his career (Who’s Afraid of Virgina Woolf, Bound For Glory).  The film’s music was provided by Michel Legrande who was nominated for the Academy Award for the score, and won with Alan and Marilyn Bergman for the song, “The Windmills of Your Mind.” 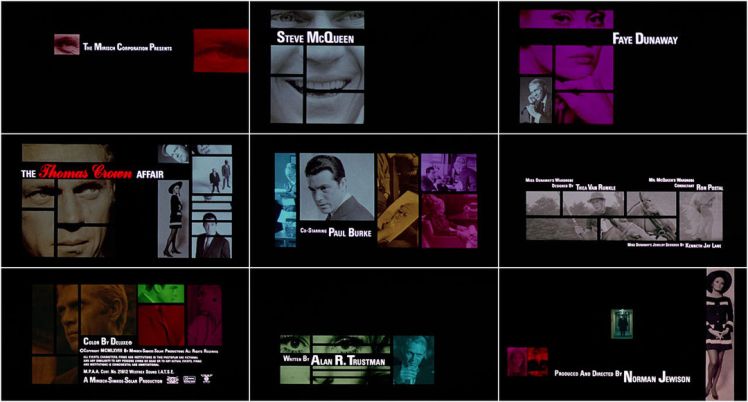 The film was produced by Jewison, in association with Walter Mirisch (The Magnificent Seven, In the Heat of the Night) and McQueen’s Solar Productions.

The film utilized a split-screen editing, moving the images in and out, showing different aspects of the same scene, and action in different locations taking place at the same time.  This technique was quite new and engrossing.  Wexler used his camera to take the viewer inside the scene.  An example is the scene of Crown and Vicki kissing, the camera rotates around them in one of the longest kisses in screen history.  Another example is the dune buggy scenes where Crown and Vicki suddenly roar over the top of a dune as the camera tracks along as they race along the beach and fishtail into the surf.  This is the other side of Crown, who attacks danger, taking us along for the ride.  So, in a fairly straight dramatic film, how do you make it interesting? Hire Steve McQueen.

Crown lives the good life, fine food, expensive cars, a stylish home.  Vicki is successful and glamorous, but she does not live in his world, she only visits.  His life is seductive and she enjoys it.

Vicki thinks she convinces Crown to give himself up and take a deal with the police.  Crown pulls a last robbery, as Vicki and the cops waiting for him when the loot is delivered to a cemetery.  He does not plan to give himself up, sending a delivery boy to give her a message.  She is devastated, both at being fooled and losing him.  At that moment, he is on an airplane leaving the country, a hint of delight on his face as he’s beaten her.

In 1999, the The Thomas Crown Affair was remade with Pierce Brosnan and Rene Russo. On its own, the new film if fine, maintaining the adventurous and stylish spirit of the original.  However, in originality and impact, the remake is a pale copy of the McQueen version.

Alan Trustman, the writer of the film, also penned McQueen’s next film, Bullitt.