At the time of this album, Ron Wood was still in the Faces, although the band was coming apart as Rod Stewart was spending more time as a solo artist and bassist Ronnie Lane had quit.

Wood was passing time hanging around The Rolling Stones as they began recording Its Only Rock and Roll, playing without credited on the title track. Wood would have the inside track when guitarist Mick Taylor left the later that year.

Wood was also spending time with George Harrison at his estate in 1973. According to Pattie Boyd Harrison’s book, George and Wood swamped wives during a period of time where George was doing a lot of naughty things. Wood has verified the story.  Shortly there after, Pattie left George for Eric Clapton.  Such is the life of a rock star.  One positive aspect of their time together, Wood and George wrote “Far East Man.”

Overall, I’ve Got My Own Album to Do is not a classic album, but it stands as Wood’s finest solo release, and it probably helped to define what would become the Stones sound for many years.  This album has the looseness of a Faces album, but more dynamic musicianship, given the great supporting cast. Wood is not a great vocalist, though he’s better than Keith Richard. Generally, the collection of songs are very uneven in terms of quality. Wood wrote or co-wrote about half of the songs.

I picked to review this album because it’s very engaging in its sloppiness, it’s like a set of outtakes from a Rolling Stones project. It has some very interesting guitar work and it’s great to see how Wood uses all of his friends.

Most of the album was recorded by Wood and Richard on guitars and vocals, Willie Weeks on bass, Andy Newmark on drums, Ian McLagan on keyboards, and various contributions by Mick Taylor.

“I Can Feel the Fire”  Mick Jagger helps on harmony vocals.  It definitely has a Rolling Stones vibe in the rhythm guitars and slopping drumming.   There are several songs on the album that sound like the Stones in the mid to late 1970s.

“Far East Man” Similar to the George Harrison version, looser guitars and more slide.  The vocals are placed deeper in the mix to let the guitars breathe more.

“Mystifies Me” Sounds more like a Keith Richard song but has the same bluesy slow grind.  A lot of the solo work from Wood and Richard are fairly interchangeable in style, which is why they compliment each other so well in the Stones.  Keyboard player Ian McLagan was a member of the Face and sideman for the Stones, so his musicianship fits like a jigsaw piece.

“Take a Look at the Guy” This could be an outtake from Some Girls, similarly sloppy guitars and keyboard accompaniment.  Sloppy is not meant as unskilled or lack of effort, it is a relaxed and non-mechanical approach.  Mick Taylor lends a guitar to the party.

“Act Together” Very reminiscent of the Faces, the way the guitars and organ interact in this mid-tempo rocker, along with a female chorus.  A surprisingly effective song.  Written by Jagger/Richards, with piano by Richard (yes, really), who contributed lead vocals as well.

“Am I Grooving You” Heavy, crunchy, bluesy guitar groove.  Has a swampy flavor to it. Richard on guitar and harmony vocals.

“Shirley” Starts off as rock-fusion, then gets a little funky with some really nasty guitar.  I’m not sure how to categorize this song, but it has a variety of very interesting guitar licks. Mick Taylor on piano.

“Cancel Everything”  Imagine Dylan and The Band in concert.  That’s what I hear on this song.  Wood uses a female chorus to give this a bit of an R&B feel.  Jean Roussel on pianos.

“Sure the One You Need”  The song has an old rock and roll feel to it, a little Chuck Berry.  Very easily Wood and company slip into a Stones groove.  The song had potential, it feels a bit underwritten, despite some nice guitar work and piano tinkling by McLagan. Lead vocals by Richard.

“If you Gotta Make a Fool of Somebody” Backing vocals by Rod Stewart.  A slow moving, bluesy tune. Wood and Richard are quite good with trading guitar licks here.  ARP synthesizer solo by Mick Taylor. 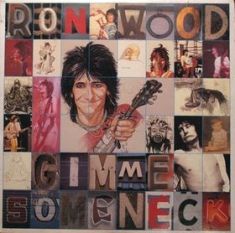 Wood joined the Rolling Stones permanently a couple of years later.  He would continue to release his own albums, in part because Jagger/Richard would control the songwriting in the Stones. Wood kept his solo career going so his own songs could be heard.

I’m not sure Wood ever worked very hard on his records; as a listener, you feel in the middle of a party. Two albums later, Wood released Gimme Some Neck, which stands as his second best solo album.  That album spawned the formation of The New Barbarians, a group he formed with Richard for non-Stones recording and touring.