Many of us grew up in the time of very testy relations between America and the Soviet Union following the Second World War.  This dislike settled into what was known as the Cold War, where direct confrontation somewhat lessened, but the nuclear threat became embedded in a war by proxy.

As a kid, the nuclear threat was existential because it was too big and scary to comprehend.  We were often reminded of the threat, these massive weapons raining down on us and more than likely, destroying our picture perfect middle class way of life.  Thank you science.

At school, we practiced going out to the hallway, getting down on our knees and burying our head in our hands. Duck and cover, it was called.  What they did not tell you was to kiss your ass goodbye.  If a thermonuclear device hit near your school, protecting your head was not going to matter.  Now, in a severe storm, debris and flying glass might be a problem where hiding your head may be a solution.  Hiding under your desk might have been a way for us to feel protected.  In a thermonuclear war, we wouldn’t have to worry about homework. Ever. 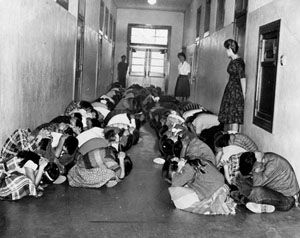 Both the U.S. and the USSR had the technology to launch intercontinental ballistic missiles from various methods and locations.  Land bases, yes. Long-range jet bombers, yes.  Submarines, yes.  The U.S. had more than 10,000 warheads, the Soviet Union fewer, but how many times do you need to destroy the world?  Think about that before bedtime. 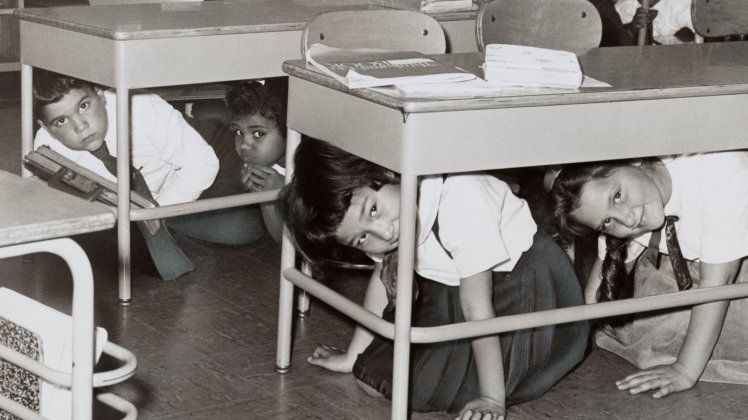 In 1962, a little thing called the Cuban Missile Crisis put the world’s future on pause for thirteen days, in a chess game between Kennedy and Khrushchev. Want to spoil a country’s day, tell them there could be nuclear weapons in their backyard.  A nice wall won’t matter.

A 1-megaton nuclear bomb (larger than Hiroshima but smaller than modern bombs) would give you a nuclear suntan five miles away, third degree burns that would kill most people. The temperature at Hiroshima was more than 540,000 degrees Fahrenheit, so if you are anywhere close by, you’ll save the cost of cremation. 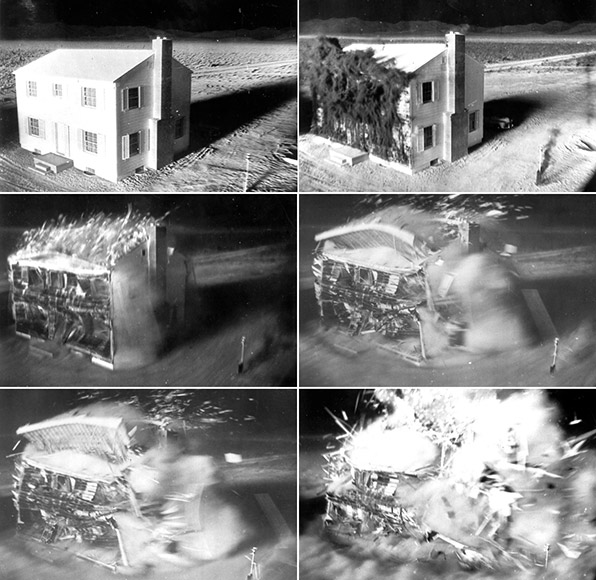 We have all seen those film clips of the wind produced by nuclear explosions, how it sucks and blows, destroying buildings and anything standing.  That is quite an ill wind. If you are at 0.6 miles from the epicenter, the wind speed would be 470 miles per hour, enough to defy any hairspray.  The blast pressure is another matter, as shock waves traveling faster than the fireball of heat, will level buildings and make for one serious insurance claim.

As the 1960s wore on, the threat of nuclear war became more focused on wars by proxy, Vietnam, Eastern Europe and other places where the superpowers flexed their muscle in other countries.  Military strategists were also busily thinking how nuclear weapons could be used tactically on the backfield or smaller dirty bombs for urban warfare.  Imagine if the Nixon Administration had actually used battlefield grade nuclear weapons in Vietnam.

Through the years, the nuclear club also expanded.  The club of five (U.S., USSR, China, England, France) has since 1974 has welcomed India, Israel, North Korea and Pakistan.  There are no dues or club meetings, but there is a secret handshake.  No wonder countries want to start their own nuclear programs.  If someone offers yellow cake, make sure they are talking about a yellow butter cake instead of uranium concentrated power.  The two do not tasted the same, and one has a nasty aftertaste.

There have been many films about the nuclear threat, most famously Stanley Kubrick’s Dr. Stranglove (1964).  Why not laugh at the end of the world?

“Mr. President, I’m not saying we wouldn’t get our hair mussed. But I do say no more than ten to twenty million killed, tops. Uh, depending on the breaks.”

“Gee, I wish we had one of them doomsday machines.”

Re-read this blog, it might take your attention away from COVID-19 for a second.