In his day, Johnny Unitas was a megastar. This was before the Internet or ESPN, Johnny U earned his fame on the football field, not through the media.

As a kid, Unitas was the best quarterback in the business. You studied his moves, his fundamentals and his swagger. This was before Joe Namath, who changed the game, and shifted the focus from the team to the individual

Unitas was all about executing in a team environment, that was the era he played. Players did not have their names in their jerseys when the Colts played the Jets in Super Bowl III. The NFL was old school, as was Unitas in his crew cut and high topped cleats.

The Johnny Unitas in his Super Bowl appearances did not show the brilliance of his talent and experience, he was an aged quarterback, worn down by multiple injuries by then, really a shell of his legendary self.  In Super Bowl III, Unitas relieved starter Earl Morrall, but was unable to bring his team back against the Jets’ defense.  In Super Bowl V, which the Colts won, Unitas was knocked out with an injury with the Colts leading.  His day consisted of a 3 of 9 performance for 88 yards, a touchdown and two intersections. The error-filled game came down to a field goal by Jim O’Brien. 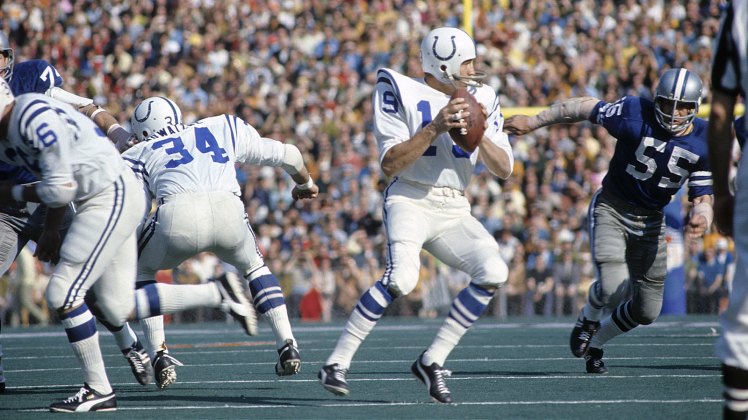 For any kid, Johnny U was a big deal. Besides his prowess, he was the role model parents looked to. He hawked products and had the right public persona. He was married with three kids. If he hung out in bars with fast women, you never knew it. Compared to hipster Joe Namath, Unitas was a square.

I met Unitas at a sports card show signing autographs. He was an old man then, who had such arm problem, that he learned to sign autographs with his other hand. This was toward the beginning of the autograph business, so it was big money for old-time athletes like Unitas to be able to attend these shows. He was a signing machine, not spending any time chatting with worshiping fans who laid down big money for a signature. He barely looked at you and did not break the assembly line process. Time is money. If you expected to relive moments of his career, you were out of luck.

I am shocked when football talking heads compare Unitas’ career statistics to players of a more recent era and aren’t impressed with Unitas’ low completion rate or intersections. Certainty, his stats are much lower than Tom Brady, the Manning brothers and others. Unitas played in a different era, totally unlike players today. The NFL was a running and ball control league then. You can’t compare the eras and I won’t attempt to here.

Unitas was the best quarterback of his era, like Otto Graham was of his era. These guys were successful at a time when they often called their own plays and took a thunderous physical beating from defenses.

Unitas did not play in the shotgun era; he took the ball from under center, dropped back anywhere from five to ten yards, faked a hand-off, faked a throw, avoided the rush and fired to a receiver. These were not timing patterns, or putting five guys into the pattern; defenders drew blood of pass receivers with vicious hits, and quarterbacks took lethal blows if they held the ball too long. Unitas was not a scrambler even in his younger days. As injuries slowed him further, Unitas was like the Statue of Liberty, something  Namath would also endure.

In SB III, Unitas entered the game when his team was behind and the New York Jets already firmly in control. Playing from behind was tough, and the Jets made him pay for his gambles. The Jets made him pass on most plays and were ready for it. This was not to be the Colts’ day.

Unitas came off the sandlot to join the Baltimore Colts. That is not quite the story, but it is part of the legend.  It was a different game then, but Unitas came to win every Sunday, even when his broke body betrayed him.

Unitas’ career statistics are pretty average by today’s quarterbacks. He tallied more than 40,000 passing yards and 290 touchdown passes. He completed just over 54 percent of his passes, not a great figure for today. However, he was a three time Most Valuable Player, five time All-Pro, led the league’s passing yardage and touchdowns four times, and was an NFL champion three times.  Unitas was a member of the NFL 50 year and 100 year teams, and obviously a member of the Pro Football Hall of Fame.

In 1973, Baltimore was cleaning house of veterans and Unitas was traded to the San Diego Chargers. He had a disastrous season and was replaced by Dan Fouts, who would also be selected to the Hall of Fame. Unitas was slow, could not move and the accuracy of his throws was gone. He retired. The sight of him in a Chargers uniform, limping, throwing an interception or being sacked was hard to watch.

Back to these rankings and debates about the NFL’s best quarterback. Those are worthless conversations as far as I’m concerned. Each era has a player who changed and dominated the game, each are unique to the time they played.

Unitas did not have the prettiest passes nor was he nimble on his feet. He played in a run-first era, with short passes and defensive backs that hit receivers all the way down the field, as his own lineman were getting head slapped and brutalized by angry defensive linemen. Finally, quarterbacks were fair game, they could get hit in the head or knees and officials were not quick to whistle the play dead. Quarterback injuries were often season or career ending. Playing fields were muddy or hard with no grass.

Unitas was playing semi-pro when he was signed by the Colts. He was working construction.  Drafted by the Steelers, Pittsburgh saw no future in him and released him. As a semi-pro, weekend player, he earned a few dollars per game; the cost of a beer at an NFL game today.

Most of us have no memory of the 1958 NFL Championship between the Colts and Giants. It was the first playoff game to be tied at the end of regulation play, so it went into sudden death. At the time, the television audience was estimated to be 45 million viewers, and it was even blacked out in New York. Unitas didn’t even get a neutral site. In overtime, after the Giants failed to move the ball, Baltimore received a Giants’ punt and went 80 yards for a touchdown by Alan Ameche for the 23-17 win. Unitas finished 26 of 40, 349 yards passing, 1 touchdown and 1 interception. A fair day’s work against a great Giant defense.  This was the type of game were Unitas earned his reputation.

When I met Unitas, he went about his business like he was pounding nails on a construction job. All seriousness. A quick look at me and then total focus on signing my helmet. Fans are often disappointed when they meet famous people. I can’t say that I was. He signed hundreds of items that day with a weird motion of his good arm. Football had wrecked his other arm. He got paid a fair sum that day, better than many years of his career. He was still the bigger than life guy with the large toothy grin. Hundreds of fans, a majority of them middle aged men who grew up wanting to be him. As men, we never totally give up on those boyhood dreams.