It is hard to think back 50 years, but I can. Following the Kansas City Chiefs winning Super Bowl IV, a wave of football interest washed over the area and that included me. 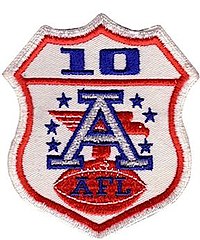 In 1969, the NFL was celebrating 50 years, and the AFL celebrated 10 years. In 1969, players wore the respective patch of their league on their uniforms.  The official merger of the leagues would happen in 1970, my first official year of fandom.

This blog is really my personal fifty-year journey. I will try to keep it interesting.

Also in 1970, the debut of Monday Night Football, September 21, a game between the Cleveland Browns and New York Jets. Football was ready for prime time.

Unless you were a fight fan, most people did not know who Howard Cosell was, but they learned to almost tolerate him.  Don Meredith had been retired from the Dallas Cowboys for a year and he was hired to give the folksy counterpoint to Cosell’s blustery pontification.  The third member of the team was Keith Jackson, who would keep the chair warm until Frank Gifford could join them in a year.  Football would never be the same from the glitz and show-biz vibe of this new entry in sports programming. 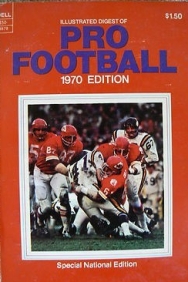 Besides the Chiefs’ Super Bowl win, my journey is largely the result of a book.  This book.  I found the information in this book to be amazing.  Statistics, team records, rosters, draft choices, plays and profiles of the top players on each team. For a football nerd, this was all I needed.

I saw a copy at the library and had to purchase a copy of my own.  I still have this book, but it is quite worn from use.

The thing I noticed about this book was how much the game changed in the next year alone.  Gone was the identity of the AFL, a league formed to challenge the NFL through innovation, modernization of rules and fan-friendly practices in order to compete with the old-school NFL that did not even wear player names on the backs of jerseys.  The NFL was like your dad’s Buick and the AFL was a Mustang.  Johnny Unitas verses Joe Namath.

When the leagues merged, the AFL went away; it was absorbed into the NFL, reorganized into two conferences.  The AFL teams gained a measure of financial stability, while the NFL team owners did not have to financially compete with a challenger, and gained a broader, hipper base of fans.  It was win-win for both leagues.

This new stability and strategic growth plan for the new NFL enabled teams to have new stadiums built in a number of cities and negotiate much better television contracts.  The merger would prove a license to print money as NFL revenues and television viewership grew.  Free agency was still years away, so teams controlled their talent.

When players retired or were released, they blended back into their communities and got regular jobs, or returned to their hometowns where they were known and often traded on that recognition to sell insurance, cars or real estate.  There was fan worship even then.  Most of these guys did not make much money playing football, and the pensions they would eventually qualify for, were peanuts compared to current NFL retirees. 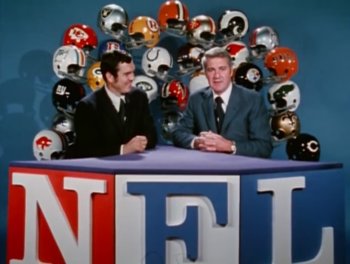 An independent film company, founded by Ed Sabol, contracted with the NFL to film games and put together short documentaries to be used as a marketing tool for the league.  Sabol put cameras on the sidelines and provided angles not usually seen on television.  He used slow motion, put microphones on players and coaches, and edited the films with music and narration to add a sense of drama to the game film.  Sabol also put together a weekly highlight show of NFL games and hired former players Pat Summerall and Tom Brookshier to provide narration for This Week in Pro Football.  He also took the most critical game of a weekend and edited it into the NFL Game of the Week.  Sabol’s company also produced season highlight programs for the teams, and special features like NFL Bloopers.  Sabol’s company was so successful in creating fans that the NFL bought it from him. If you can find episodes on YouTube, it is worth your time. This was a different era.

In 1970, there were still a few position players who were kickers or punters. In those days, there were 40 man rosters so starters often ran back picks and blocked on special teams. Kickers were becoming specialists, but the evolution was not yet complete. Starting quarterbacks also held for place kicks. And most kickers wore square-toed shoes and kicked straight rather than the soon-to-be popular soccer style.

Kicking was challenging on those worn-grass and dirt fields. Indoor stadiums?  Just the Astrodome where it has artificial turf on concrete. Yikes. When it rained, mud. Back in those days, growing grass in late fall was tough. Soon, many stadiums would go with the astroturf surface/concrete subsurface, which caused as many injuries as Dick Butkus. In 1970, some football teams were playing in stadiums built for baseball, so the site lines were weird, the seating capacity was much less than today and the wind currents in the stadiums played havoc with passes and kicks.

Speaking of injuries, knee injuries were major surgeries that took you a year to recovery, if you could recovery. Gale Sayers and Joe Namath are examples of players whose careers were cut short by knee surgeries. Scoping did not exist. Players literally died on the operating table from complications. Players limped back to work but many endured bone on bone knee joints and lost speed and strength. They endured for game checks (no guaranteed contracts) and competitiveness.

Greg Cook, 1969 AFL Rookie of the Year, injured his shoulder in his second season playing for the Cincinnati Bengals. Dubbed a natural passer and athlete of a generation, he tried for five years to return from major surgery, but the magic in his arm was gone. A sure Hall of Famer, but it was not to be. Today, his shoulder could have been reconstructed and proper therapy to return him to form. A career and millions of dollars saved. In those days, going under the knife was career threatening. The Kansas City Chiefs has a young player, Mack Lee Hill, a powerful and graceful running back. A free agent, he made the team and won the starting fullback job in his rookie season. A knee injury the next season landed him in surgery where his temperature unexpectedly rose to 108 degrees and he died. The Chiefs named their most valuable rookie award after Mack Lee Hill.

Back in 1970, a season was 14 games, not 16 as it is now.  The preseason was a miserable six games.  Players came to game in July to get into football shape, they did not have an off-season training program.  In the off season, most players worked regular jobs to feed their families.  Teams had about six assistant coaches, not the hundred or so today.  Game film was actually film, run through a film projector.  Teams scouted on their own for the upcoming draft.  Assistant coaches were the scouts.  Scouting combines came into vogue later.

Quarterbacks did not wear red “do not hit’ shirts in practice, but if you injured a starting quarterback, you were gone.  In games, quarterbacks took a pounding, as there were sliding rules.  A quarterback’s knees were fair game.  Offensive linemen could not use their hands against defenders to block.  Receivers were manhandled all the way down the field; not just for the first five yards like today.  Defenders could also do something called the “head slap” where they would literally slap the helmet of a defender to shake them up.  Deacon Jones of the Fearsome Foursome made a career of ring the bell of offensive linemen.

What made the 1970 season so fascinating?  It is like discovering anything new that peaks your interest and has such entertainment value.  I also spent time looking at the history, the pioneers of the sport and appreciated how it became so ingrained in the American psyche.  How I feel today about the sport is very different from the wide-eyed young man back then.  It is much more a business than a sport now, and both the league and fans seem to lack the reverence for the sport’s history, that I had then.

The NFL is still a shiny object, but it is really more glitter than glamour.