Dame Diana Rigg was much more than just an actress, but we knew her primarily from her stage, television and film roles.

How many of us were ga-ga at Mrs. Peel on The Avengers? Once we saw her, we never forgot her. Smart, brassy and confident, Mrs. Peel knocked down stereotypes. In that period, it is difficult to think of a more culturally significant woman. Yes, she was beautiful, fashionable and had a wicked sense of humor. Her significance was way beyond those things. Women were supporting players who deferred to the male. Even when she did, you saw that smirk that said she was just going along with it. Until she did not want to anymore. After three years of The Avengers, she moved on to other things.

Rigg knew she not paid comparably to her co-star, Patrick Macnee, but it really irked her that crew members were paid more. She made a stink about it and risked the backlash.

“No, I didn’t stamp my foot. All I said was, ‘Look, this is unfair,’ and I got double, £180. It still wasn’t a huge amount.” It was the right thing to do but it impacted her reputation within the industry.

“I was lonely as well because no one supported me. I did get more money, but thereafter I was labelled as go-getting and ‘hard’ – and it was unfair because I wasn’t.”

That’s what I respected most about Diana Rigg, she stood up and fought, and never gave up.

Rigg was a Bond girl, the only wife of James Bond in the series.  She starred in two of my favorite films: The Hospital and Evil Under the Sun.  I will discuss those later.

“There are some actors who don’t like to play bad; they like to be liked. I love to be disliked.”

She easily moved between television, the stage and film in her career. She studied at the Royal Academy of Dramatic Art before making her debut at the Royal Shakespeare Company in 1959. She returned to the stage, again and again, winning a Tony Award for Medea.  She starred on Broadway four times and each time was nominated for a Tony.  On television, she was nominated for an Emmy Award six times, including four for Games of Thrones, which introduced her to a new audience.

Doing much of her work after The Avengers on stage and British television, I often wondered what happened to her, but she was busy almost until her death.

The Hospital was a very black comedy, written by Paddy Chayefsky, about the failed state of healthcare in America. And this was in 1972! Rigg played the daughter of a man admitted to a Boston hospital where a number of suspicious deaths happen. At the same time, the chief of medicine, played by George C. Scott, becomes despondent with his faltering life, and enters Rigg’s orbit. While this is not Rigg’s best part, it is one of her best films. She wraps Scott’s Doctor around her finger, although these is an unnecessary scene where Scott’s doctor forces his intentions on her.

Agatha Christie’s Evil Under the Sun allows Rigg her most viciously bad role. Her adversary is Maggie Smith, and the two of have a field day of insults and trying to top each other. As former showgirl Arlena Marshall, she is the one everyone tries to charm but loves to hate. It is a marvelous role, in my favorite Christie film. 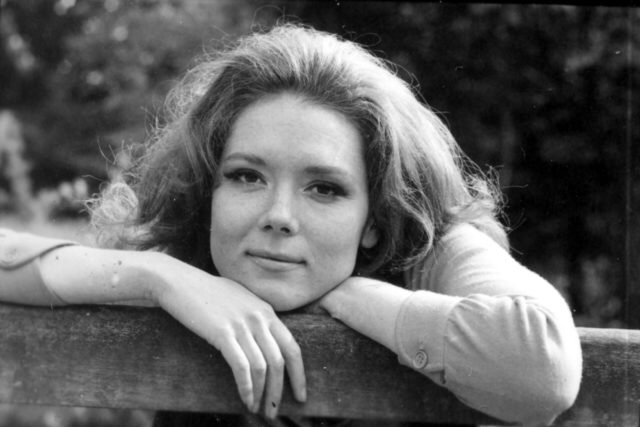 “I think women of my age are still attractive.” She always was.