He’s a clever and funny guy. You either like him or you do not. 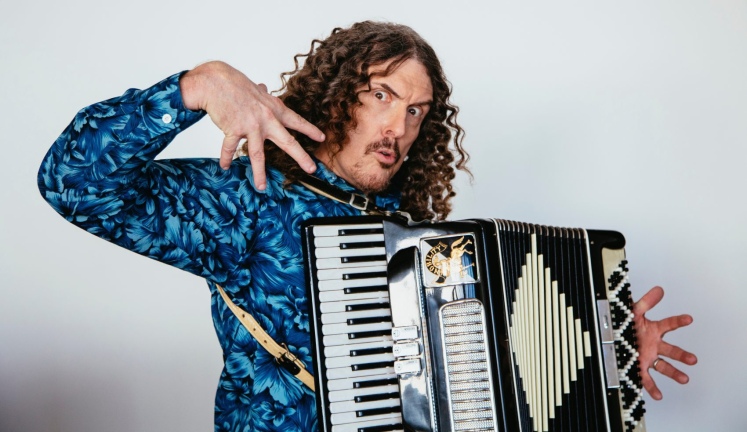 Alfred Yankovic started calling himself Weird Al in college as a way to give himself some distinction. He started college at age 16 and admitted to be a big nerd. He got picked on in school, but understands how the experience shaped his career. He appreciates that kids can identify with him and be okay knowing they are different.

You may not like his looks or appreciate his parody songs, but it’s hard to overlook his talent. His parody songs are well-done and creative.

Even Michael Jackson was a fan. He allowed Al to film a parody video about a Jackson song on his subway set.

Kurt Cobain did not realize he had “made it” until he heard the parody Al did of Nirvana.

Al even made a film that incorporated some of his musical parodies. UHF was a 1989 film starring and co-written by Al. The story involves hapless George (Al) who can’t keep a job and disappoints his faithful girlfriend, until he forgets her birthday dinner. Al’s uncle wins a dilapidated and unprofitable local UHF television station. George and his friend take over management of the station, creating some bizarre shows including a kiddie program for janitor Stanley (Michael Richards) that becomes a surprise hit.

The owner of a successful network affiliate tries to put George’s station out of business and kidnaps Stanley. A viewer fundraiser raises enough money at the last minute to save the UHF station and put the affiliate owner out of business.

The film is silly and goofy, but has a harmless charm to it. Parodies of Rambo, The Beverly Hillbillies and Indiana Jones are quite good.

Al has been involved in 54 musical videos, directing many of them. His most popular have been “Eat it”, “Like Surgeon”, “Money For Nothing”, “Smells Like Nirvana” and “Amish Paradise.”

For a guy who is so goofy and seemingly an attention getting performer, Al is a major introvert.

His wife said: “He can be so quiet, you wonder whether he’s hiding something. How could a guy who throws on a fat suit to perform funny songs in front of thousands of fans be shy? Easy.”

And he plays the accordion. How cool is that? Or not. But Al is cool.