Pitt is now 57 years old, thankfully, most of us do look that good in our senior years.  His first year of acting credits was 1987, with uncredited film roles and several television series appearances, including four appearances on Dallas as “Randy.”  Randy was probably an apt name for his character, which no doubt exploited his young, raw, good looks.

Pitt is a film superstar, his success, earnings and longevity speak to that.  It used to be easy to discount Pitt because of his looks and his tabloid headlines.  To do so, would be to fail to examine his long-term stature and his body of work (no pun intended). He’s no flavor of the month. The man has won acting and producing Academy Awards, and has built a legacy of film work that I believe will rival past stars of Hollywood.  How does he compare to film titans of years past?

Here is how I examine his career against Hollywood royalty.

Brad Pitt has the swagger of Jack Nicholson, Humphrey Bogart, Marlon Brando and Paul Newman. Intentional or subtle, they occupy their scenes; quiet or loud, they have the emotional energy, not only for that scene, but the film’s dramatic spine goes through them.  There is energy in the air when they are on screen; you may not see it, but you feel it.  In his early years, Pitt was about action, he was more visceral, he wanted you to notice him.  In his 40s, his acting style relaxed and he got more audience reaction by doing less.  Watch him in Ad Astra, or much of Once Upon a Time in Hollywood, and notice the restraint.  Even when he is “big”, his performance is just big enough.  Less is more. 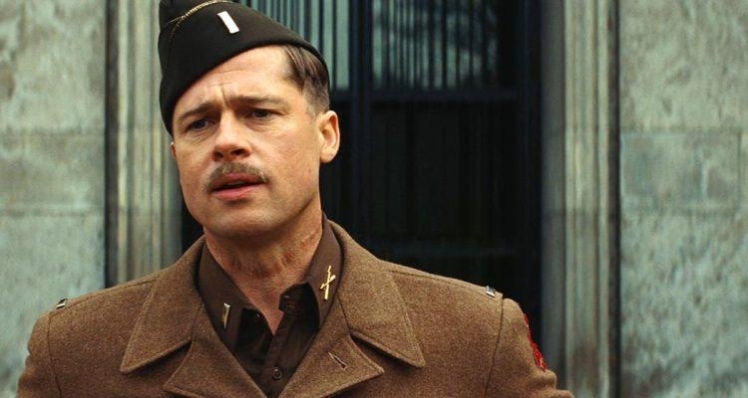 Pitt possesses an earnestness that Newman, Redford and James Stewart brought to the screen, sometimes a wide-eyed revelation, other times a quiet, yet burning look.  You believe him.  This earnestness connects with the audience, and it is even more effective when a strong, good-looking, confidence person is able to draw the audience into their vulnerability as people, not actors.

Pitt as an action star uses attitude and confidence more than guns and fists.  You saw that in Gary Cooper, Burt Lancaster, Clint Eastwood and Newman. No wasted motion, never over the top.  Acting is about measured performances, giving the audience just enough, but never too much, which dilutes the performance.  Pitt can fight and run across buildings with the best action stars, but keep you eye on his subtle movements, like a wise boxer plotting his strategy for later rounds.

Newman (The Verdict, Absence of Malice), Redford (The Way We Were, The Great Gatsby) and Cary Grant (North By Northwest, To Catch a Thief) could play devilish rouges, with a twinkle of the eye, a comforting comment, while they stole your wallet. Pitt has that easy smile and boyish innocence that romantic leads had in the Golden Era.  It made them human and momentarily vulnerable.

Pitt obviously has the movie star looks of Newman, Warren Beatty or Redford, just as they did into their later years, but Pitt has the business sense of Burt Lancaster, Cary Grant, John Wayne and Kirk Douglas. He has been producing, or co-producing, his projects for years, and also develops many films (Selma, 12 Years a Slave, Vice) he did not appear. Plan B Entertainment, Inc. is his privately owned production company.  Pitt has 60 producing credits on IMDb.com.

Pitt’s early career was image and style heavy; full of pretty boy, tough guy, angry young man roles.  Basically, the decade of the 1990s, when Pitt moved up to starring roles, alternating between All-American characters and those from the other side of the tracks. Redford called these popcorn movies and interesting acting roles; films you do for money and for wide release (A River Runs Through It, The Devils Own, Meet Joe Black), and others that you find challenge and fulfillment (12 Monkeys, Seven Years in Tibet, Fight Club).

Grant, Cooper, Stewart, Brando, Bogart, Nicholson, Redford and Newman, each had a “got to” role or an identity that ran through their screen careers.  Even more recent actors like Pacino, De Niro, Hanks, Freeman and Washington evoke a style and image that at least loosely defines them.  With Pitt, that is harder to pinpoint. Glamorous, good guy?  Principled and steely?  Flawed, tough guy? Roguish and colors outside the lines?  Pitt plays all of these well.

So, will Brad Pitt be remembered in the same group as these pillars of the film industry?  Time will tell, but his work makes a strong argument to be included in the club.