Small in stature but with an enormous spirit, Big Sonia is the story of Sonia Warshawski, a Holocaust survivor who at 91 visits schools, prisons and many other places to speak about her life and wartime experience. The film follows Sonia on some of her speaking engagements, and weaves her life story, including the years in three death camps, along with her life in Kansas City following the war. Her family requested to settle where there were nice people. You get to know Sonia from interviews with her family, her speaking engagements and in her own words. 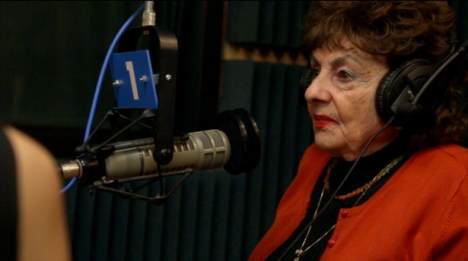 With the passing of time, the number of Holocaust survivors diminishes, those who were witness to the worst of humanity. In recent times we have seen an increase in hate crimes and a rise in neo-Nazi groups who preach the same hate and divisiveness that Sonia lived through. Why does she tell her story? So the world does not forget, and it comes from a survivor, in her own words and memories.

Big Sonia tells the story of those years in the death camps, of seeing her mother go to her own death in a gas chamber, of the brutality of her experience, and of living with those memories for more than seventy years. Despite this heavy storytelling, this is not a film of hate or sadness, although it has bittersweet elements.

Sonia stands under five feet in height but she stands tall in the lives of her family, friends and those she meets along the way. She has met with prisoners in various correctional facilities and you see their reaction to her story and her resilience to live events. Men hardened by life and years of incarceration are reduced to tears and reflection in their own circumstances. Sonia preaches survival and that you do not have to be defined by life’s events. You can rise above them and move forward with your life. Sonia is very clear that she cannot forgive what the Nazis did to her and millions of others; that is for a higher power to deal with. Sonia does not hate, because hate destroys the hater, and Sonia is about life.

“I’ll never hate. If I hate, I destroy myself,” Sonia says.

The film took over six years to make and during that time Sonia learns that the lease on her tailoring shop has been cancelled, signaling another very large life event. The shop was operated by her late husband in the Metcalf South Mall and was there for many decades. She took over the shop after his illness and death; now the mall is closing and she is the last tenant. The shop is a large part of her life, a connection to her earlier life, and a large part of who she is. Her customers are very much her family, some of who have been her customers for many years. I will not spoil the next part of this story.

In 1942, a teenage Sonia and her family were forced from their town in Poland into a ghetto, where daily life involved indiscriminate killings by the Nazis. Life in the ghetto was to live in constant fear. There were periodic deportations to the camps that Sonia was able to avoid until the Nazis with their dogs found her hiding under the floorboards. Her father and brother were shot after they were discovered hiding in a house. Sonia’s little sister escaped and hid with partisans in the woods through the war.

In 1943, Sonia and her mother, along with many others were packed in railroad cars and sent to Majdanek death camp. Of her extended family, only Sonia and her sister survived the war. Sonia survived the beatings, starvation and daily fear of death, only to be shot in the chest on the day the Bergen-Belsen camp was liberated by British soldiers. How’s that for irony?

I said, “I went through already the hell and here in the day of liberation, I have to die.” It’s something I couldn’t accept this.

Most of us will never experience anything remotely close to the horrors Sonia did. Sitting in the theater I felt a lump in my throat, particularly during the reminiscences of the death camps, told with such matter-of-factness and clarity.  As Sonia describes those experiences it is not from a history book or newsreel footage, it is a grandmother reliving those in vivid detail, the pain radiating from Sonia’s eyes.

Sonia and her family, her granddaughter was one of the filmmakers, were present at the screening I attended. They answered questions after the film, and Sonia greeted everyone in the lobby after the film.  A “Sonia greeting” is as if she’s known you all of your life. She is warm and funny, and very direct. The line of people waiting to meet her was out the door and down the hallway. Sonia was like a rock star. Everyone wanted ato be near her and get a photo with her.

Sonia is someone you will not forget. With her big hair, flair for leopard skin (including her steering wheel) and love for colorful flowers. This compact lady is bigger than life. A few minutes with her, you gain a new appreciation for life.