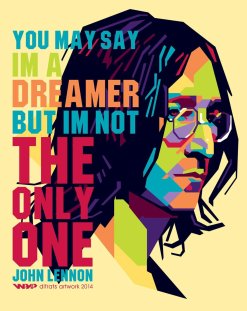 John Lennon,  “Grow Old With Me”

I remember the night. I was watching Monday Night Football when the news broke that John Lennon had been shot, and then later confirmed that he had died. Stunned and emotional, that best describes my state of mind.

Everyone had a favorite Beatle. I liked them all differently. John made the most interesting music the Beatles recorded. By 1969, his focus shifted from the sculpted radio-friendly hits to music that satisfied other Lennon goals. He still had some hits, after all he was a talented writer and his name guaranteed a listen but his interests were more driven to support his message and to dig deep into his psyche to release some of his own conflicted history. The high point of his 1970’s music was Imagine, probably the most perfect Beatle solo song. His solo albums were somewhat disjointed and he stopped growing musically. I say this as a fan, he seemed to lose his drive to progress and explore contemporary sounds. That’s okay, Walls and Bridges was a nice return to a more commercial sound, and then he stopped recording altogether. 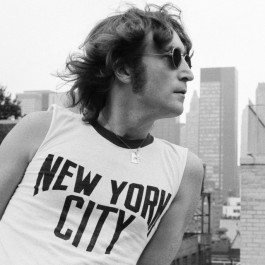 In 1975 his recording contract with Capitol Records expired. He could have re-signed or gone elsewhere but he didn’t. He has reconnected with Yoko and his son Sean was born. He had been exiled by Yoko to Los Angeles where he drank and misbehaved rather publicly. After more than a year away, he came home to New York and changed his life. He walked away from music and from the spotlight. He became in his own words, a house husband. Who on earth walks away from a successful career at 35 years of age? John Lennon was never conventional so why start now.

For those of us who followed the very public and brutally honest ex-Beatle in the early 1970’s, the next five years off the radar were very lean. Five years in the music business is a lifetime. Styles, tastes and radio formats change like the seasons. In 1979, he began his re-emergence and released an album with Yoko. He wrote a song that he gave to Ringo called “Life Begins at 40.” Life was good, he was ready to come back. And then it all stopped.

While this blog is a sad thing for me to write, there are a lot of very good things to remember about John Lennon. For years I avoided to listening to any Lennon solo music, it was just too painful. Then, a couple of years ago I opened the door and began enjoying it again. It was like learning to walk again, it was slow and difficult but it got better.

One of the hardest things about the death of John Lennon was that it closed the door on the Beatles ever reuniting. George Harrison famously responded to a Beatles reunion question as being impossible as long as John Lennon was dead. Lennon’s death also said with finality that the “dream was over,” a line from a Lennon song. For me, the dream preferred to the optimism that began in the 1960’s and continued through the most of the 1970’s. By 1980, darker days were upon us. From the hostages in Iran, to the oil embargo, to political assassinations, to a rise in terrorism, to an economic downturn, the world needed a lot more than just love.

John Lennon never held back on his views. Those views and his protests put him on Nixon’s enemies list and started deportation actions against him. It would take him years to sort out his resident status. He crusaded against war, against sexism, against racism, against injustice, and was very generous with his time and money for things he believed in.

John Lennon will forever be associated with the peace movement. It was newsworthy and fashionable and his “give peace a chance” has been taken up by future generations. He has been immortalized with statues, parks and other places bearing his name, or the title of one of his songs. As fans aged, they may have put aside the music but they did not forget what they liked about John Lennon. McCartney might have been best with the smart melody that sticks inside your head, Harrison with spiritual awakening, but Lennon spoke with his heart and challenged us to make the world better.

We will never know what John Lennon would have been after age 40.  He never got the chance to grow old with Yoko. All we have is what he was during his 40 years and appreciate the joy, the inspiration, and the legacy he gave us. Our time on earth is what we give to others. What if John Lennon had never existed? Although it was tragically cut short, it was a pretty wonderful life. And a great gift to us. Imagine that.

One thought on “Remembering John Lennon”