Even if you didn’t grow up in the 1960s, repeats of old television shows of the period are shocked full of pop music. For this blog, I’m going to use pop music and rock and roll interchangeably, with the understanding that we are talking about youth music (rock and roll, pop, folk, rockabilly), not Percy Faith or Dinah Shore.

Take the period between Rick Nelson of Ozzie and Harriett, who introduced regular pop tunes by a cast member, and The Partridge Family, a show built around a pop group family, and there are plenty examples of pop music influences on television sitcoms. Let’s remove Ed Sullivan, The Monkees (a show centered on a pop group) and musical/variety shows from the conversation, and focus on how pop music was weaved into traditional television programs.

The rise of rock and roll in the late 1950s changed the music industry and pop culture in general, and this was no more evident as television shows were embracing music aimed at younger demographics. In the 1950s, televisions were in most homes, and teenagers were becoming a rising part of the consumer market. Television and film producers took notice. Situation comedies were increasingly built around families with children becoming the focus of these programs. Even popular shows like The Danny Thomas Show, Ozzie and Harriett and Father Knows Best revolved around the weekly misadventures of the kids and attempts of the parents to deal with or solve (with hilarity and maybe a lesson) their household problems. Soon, shows were built around the kids with the parents becoming supporting players. Leave it to Beaver, Dennis the Menace, The Patty Duke Show, Gidget, The Brady Bunch, etc.

Even shows like 77 Sunset Strip had a youthful, hip co-star Edd Byrnes, who inspired a song on the pop chart. Peter Gunn, a detective show not affiliated with the youth market, had a stylish jazz theme song and Henry Mancini score that crossed over into cool. Buzz and Todd, two young men drove Route 66 in a Corvette in search of America were helped by the cool, jazzy Bobby Troup theme song.

As Elvis, The Beatles, The Beach Boys, Fabian, and others took over the pop chart and sold millions of records, television and films began to incorporate this pop culture phenomenon into small and big screen fare. Even more traditional TV shows like Gilligan’s Island and F-Troop (a Western!) found ways to weave pop themes into stories. TV writers worked hard to integrate youthful themes into shows and music was an easy, although somewhat contrived, way to do it.

Television producers paid attention to the popularity (and ratings) of Rick Nelson and Shelley Fabares (“Johnny Angel”) and found their own ways to use pop music. Here are a few examples.

Who knew Patty was such an eager singer. The show featured her in not one, but several musical situations.

Patty singing “I’m Henry the VIII I Am” 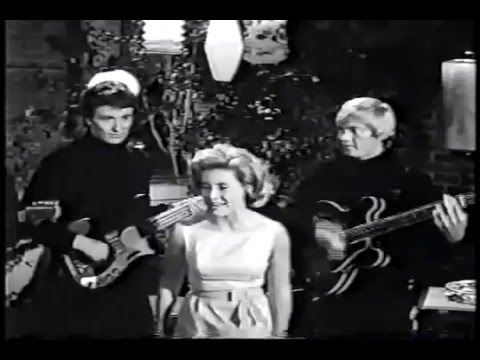 Gidget and Larue join a folk group and turn into The Gories, a pre-goth group. Hilarity ensues but fame is short lived.

In the same episode we get The Honeybees and a group known as the Mosquitoes (Bingo, Bango, Bongo and Irving). As usual, the island is visited by outsiders, this time it is four musical lads, who meet up with Ginger, Mary Ann and Mrs. Howell, who form a group called The Honeybees. Hilarity ensues and The Honeybees are too much for the lads, who feel threatened by how good the gals are and leave the island without revealing the castaways need rescued. A familiar result. 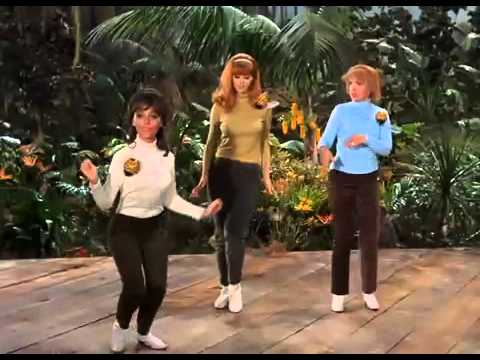 Older son Robby (after oldest son Mike departed the show) is in a pop group and performs audition. This wasn’t the first time that pop music was woven into an episode. Robby and Mike previously formed a folk duo in an early black & white episode.

Music was a staple on the show. Usually the music was folk or traditional tunes but in the first season, the show ventured close to rock and roll, although it makes a sharp turn toward rockabilly and jazz. Local boy Jim Lindsay (James Best) was a guitar whiz who hooked up with a traveling band of jazzy, kool kats. He starred in two early episodes. 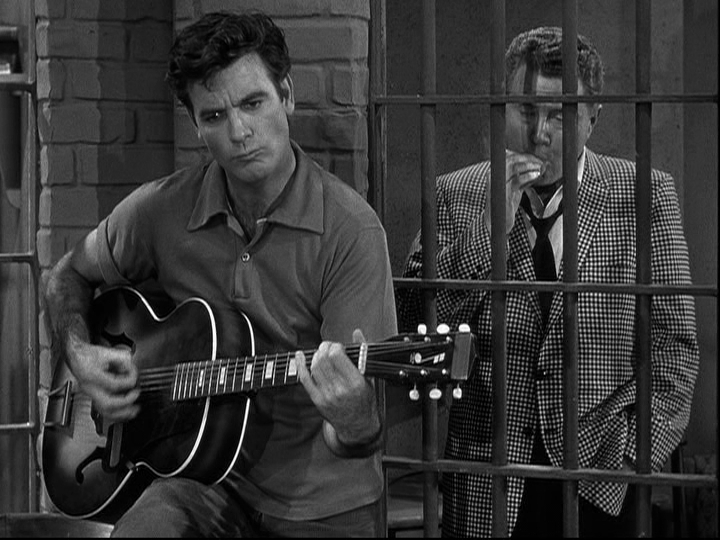 “The Twizzle”, a variation of the Twist, is sort of rock and roll.

Davy Jones, fresh from The Monkees makes a visit and impresses Marcia. The song he performs is much more pop than rock, an indication of where Davy was headed. 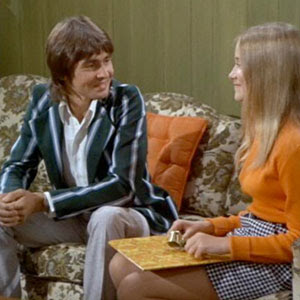 In perhaps the strangest plot device, The Bedbugs arrive by stagecoach to play at a town function. This is somewhat like ZZ Top showing up in the old west in Back to the Future III.  By the way, the guitar player is Lowell George, who would go on to play in Little Feat. 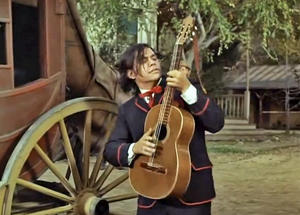 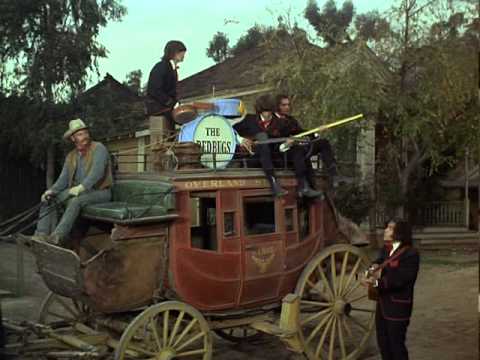 It is fun to look back on these old shows and see how they pandered to the youth market to be culturally significant. Times were a-changin’. Music was an effective marketing tool for viewers, that wasn’t new, but skewing toward rock and roll was a big cultural shift, and advertisers were quick to take notice.

Fifty years later, these are a mixed bag to look at. Some of these are downright silly, while others are clever.