Jack Lemmon won a Best Supporting Oscar for his role in Mr. Roberts. Twenty years later he took home an Oscar in a leading role for Save the Tiger. Jack Lemmon played many of the same characters as did James Stewart, although Stewart established his grit in a series of 1950s Westerns playing flawed men, while Lemmon also played some very different flawed and wounded characters.

As the junior executive in The Apartment, he suffered as he saw the woman he had feelings for being used by powerful men. In The Days of Wine and Roses, he succumbed to alcoholism as his life circled the drain before saving himself. In Save the Tiger, he struggled with committing insurance fraud as his business circled the drain. In The China Syndrome, he tried to alert the world of the danger of nuclear power. In Missing, he was the anguished father searching for his missing son feared dead. In Mass Appeal, he was the priest who belatedly stood up for a young seminary student, as he confronted his own need for acceptance by his parishioners.

Jack Lemmon was a master at playing the anguished, self-doubting character is search of the answer. James Stewart often showed his temper and outward anger, but both could be a cauldron of internal stew of distress.  Both could also fill the screen with goodness, then turn that goodness inside out, and still have the audience in their pockets.  Good guys, good actors.

Lemmon passed away in 2001 from cancer, but he worked steady until his death, accumulating an impressive number of film credits in a 50-year career. In the 1980s, his career took somewhat of a dip but he responded with some strong character roles and re-teamed with Walter Matthau in a late-career surge. Like Matthau, Lemmon found television success late in his career.

Jack Lemmon played villainous characters (The Great Race) or lecherous (Under the Yum Yum Tree, How to Murder Your Wife, Mr. Roberts), neurotic (The Odd Couple),  self-indulgent (My Fellow Americans), gullible (The Apartment, Irma La Douce, The Fortune Cookie, The Front Page), broken (JFK, Save the Tiger, Glengarry Glen Ross, Missing, The Days of Wine and Roses), lost (Mass Appeal, The Out of Towners, Avanti, Good Neighbor Sam, The April Fools).  Whatever he played, he played well.

Lemmon portrayed likeable guys although sometimes misguided or too trusting, even if you didn’t really like him in the beginning, you rooted for him in the end. Felix Unger was neurotic and whinny, but he won a place in your heart.

He often teamed with writer/directors Billy Wilder and Blake Edwards, and writer Neil Simon. In the 1950s through the 1970s he favored screwball comedies. He made one Western and two war films, otherwise he stayed in contemporary films, and most of his comedies had a distinctly adult, risqué flair to them. At his peak, Jack Lemmon was the first choice of directors with a comedy script. Into middle age he was the romantic lead, then shifted to dramatic character roles, then reappeared as a romantic lead (Ann-Margaret!).

In 1960, Lemmon set up Jalem, his own production company, which produced a number of his films into the 1980s. The most successful production was Cool Hand Luke, which starred Paul Newman, and was nominated for many awards. Lemmon directed one film, Kotch, starring his buddy Walter Matthau. It may be fitting that Lemmon and Matthau passed within a year of each other.

What made Jack Lemmon such a successful and popular actor?   I believe it is for the same reasons that audiences love James Stewart and Tom Hanks. Two Academy Awards showed that Lemmon could act; in my opinion, he didn’t win for his best performances. Lemmon was an everyman, who had the same doubts, good humor and romance that anyone can relate to. While he wasn’t a physically imposing man, and he didn’t appear in many action films, he has strength of character and he could fill the screen with his emotion.

From the late 1950s to the end of the 1960s, he appeared in many romantic comedies but he wasn’t a traditional leading man. His contemporaries, Paul Newman, Dean Martin, Kirk Douglas, Tony Curtis, Robert Mitchum, James Garner, Rock Hudson, were more light comedy leading men. Lemmon brought a higher energy level, a zaniness and neurotic flavor to his roles. Lemmon could play straight but he had an extra gear that his acting slipped into. Watch his performance in Mr. Roberts as an example of this top gear in action. He walks the thin line between passion and foolishness, but he nails it. Audiences and Academy voters agreed. After Mr. Roberts, Lemmon career got a large boost.  After Some Like it Hot, he was a made man. 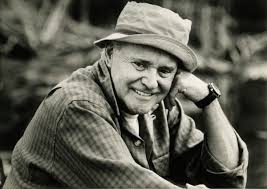 Today he is remembered mostly for Some Like it Hot, The Odd Couple or his Grumpy Old Men films. These are the films that play on cable.

Digging a little deeper and you find treasure.