Robert Ryan died 45 years ago, so I remember him mostly when he was late in his career.  He was mostly playing generals by then in big budget films.  Cranky and demanding were his characters.  He was usually listed as the second or third lead, his name added prestige to the films.  Robert Ryan was the consummate supporting actor, delivering a solid performance, not fancy, but very effective.

Ryan was a good looking guy but radiated a toughness which was perfect for the villain and noir roles that brought him notice. A boxer in college, a ranch hand and then a drill sergeant provided him the muscle and attitude that directors in the late 1940s wanted for the post war period. 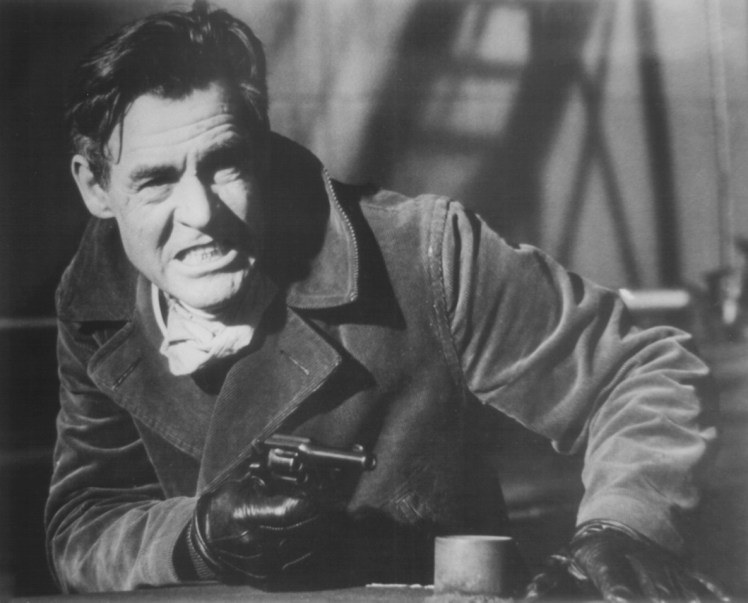 Early in his career he had many leading parts, mostly in crime, war or cowboy films. He had an intensity that was hard to miss. His name was above the title but he was still a long way from becoming the respected actor his name would represent.

His big break came with Crossfire (1947), a crime noir film about an anti-Semitic murder. Ryan received an Academy Award nomination for his performance.

This was followed by such popular films as The Setup, On Dangerous Group, Flying Leathernecks, Clash By Night, and The Naked Spur. He worked steadily, making three or four films a year. Occasionally, he crossed over into television, but his day job was making films. He might not have always been the star, but when the camera was on him, so was the audience.

In 1955, he co-starred with Spencer Tracy, Walter Brennan, Lee Marvin, Ernest Borgnine and Dean Jagger in a psychological thriller called Bad Day at Black Rock. Every performance is golden, as the drama is ratcheted up as the plot unfolds. Ryan is the big cheese in the town, determined to keep the town’s secret at any cost, including killing Tracy before he can uncover it. Ryan had the maturity to pull it off, not just a soldier but the town boss.

Ryan’s characters simmered with violence just below the surface, ready to erupt at any time. That controlled rage was a useful quality, sometimes it was expressed as someone damaged or up against a mountain of a problem.

In the 1950s, Ryan was often the lead in smaller films, or the second lead in bigger films. He often played racist or sadistic characters, roles he excelled at but didn’t want to become typecast. He could play menacing, as in his Ike Clanton role in Hour of the Gun or as the character in Bad Day at Black Rock. He could play menacing without raising his voice or being physically imposing, he did it with attitude. That’s what really good actors do.

In the 1960s, Ryan would graduate to playing many senior military officers in films like The Longest Day, The Dirty Dozen, Battle of the Bulge and Anzio. Need a general, call Robert Ryan. These big studio productions needed stars with name-power.

In the latter part of the 1960s, Ryan gave two of his best performances in two Westerns.

In 1966, The Professionals starred Lee Marvin and Burt Lancaster, along with Ryan and Woody Strode as guns for hire to bring back Claudia Cardinale from a Mexican bandit. Ryan was still fit but in his late 50s, and this was a physically demanding film. His character’s specialty is horses and he turns his usual hard boiled attitude into one of gentleness with the animals in his care.

His other big film was The Wild Bunch, where he plays a former outlaw now hired to track the bunch after they are fooled into robbing a railroad office, where guns hired by the railroad are waiting. Ryan is the third lead, but his scenes are among the best in the film. Ryan’s character is conflicted, he is under pressure to bring back the bunch or be sent back to prison. He and Pike, the leader of the bunch have a history, where Pike escapes and Ryan is wounded and sentenced to hard time.

Ryan’s character begins to yearn for his outlaw days, where men had a certain honor and there was clarity in their purpose. He resents the “gutter trash” he has been forced to ride with in pursuit of the bunch. The final scene has Ryan sitting at the crossroads of his life, he’s quit the railroad job, and joins up with some rebels to fight for their independence.

Despite the variety of roles in war, crime and characters prone to violence, Ryan was a pacifist and was active in civil rights and other social efforts including helping to start a progressive school.

Robert Ryan may never get his due as an actor from historians, but film audiences know he’s the real deal.