Paul McCartney is a successful guy.  Former Beatle, billionaire, one of the top songwriters of all time, a British Knight, beloved by millions (or billions). In his 70s, McCartney is enjoying a career peak, with a new album and an endless tour around the world and back again.  Yet, in the years immediately after leaving the Beatles, success was difficult to come by.

His first solo album, McCartney, was panned and although selling well, was not what most fans had hoped for.  Recorded by himself, mainly at home, it had a folksy, amateurish feel to it.  Only “Maybe I’m Amazed” had the finish of a Beatles song.  The rest of the album seemed like bits and pieces, similar to some of his songs from The White Album. Personally, I felt the album had a quiet charm and sensitivity. I knew he would produce works of greater significance.

In the decade after after the Beatles, as it took years to settle complex business issues, McCartney sought to step out of the shadow of his former group.  When he played live, he sidestepped his Beatles songs.  Only on his worldwide “Wings Over America” tour did he include a few Beatles songs.  He had to.  Fans would have rioted.

In the next several years Paul jumped back into music but was somewhat untethered, except for the support of wife Linda. Pending the dissolution of the Beatles, a lot of group money was being held, so each former Beatle had to earn a living.

He released a series of singles that underwhelmed the musical world. “Another

Day”(1971) was a non-album single that seemed to hint at some of McCartney’s lost luster at writing radio-friendly songs. “Give Ireland Back to the Irish”, “Mary Had a Little Lamb” and “Hi, hi, hi” didn’t exactly set the chart on fire. McCartney also got two of those three songs banned from BBC radio play because of political commentary and for suggestive references.

Ram, by Paul and Linda McCartney, sold more units and yielded a number one hit, but

was again fodder for critics, and even by his former writing partner, John Lennon.  The material was called trite and sentimental, far beneath the seriousness of his Beatle work. It’s an overlooked album, full of great musical ideas. While it might not contain many original musical ideas, McCartney delivers a flawless performance.

McCartney longed to hit the road, in a similar fashion to the Beatles in their early days, when the boys and their roadies loaded up the van and drove from concert to concert.  So, that’s what he did.  McCartney and band dropped into universities and other venues to play.  Since he was not yet reconciled to playing Beatles material yet, he had to rely on his solo work.

Next up, McCartney formed another band, Wings.  He called in Denny Laine, who he had

known from The Moody Blues days, and Denny Seiwell, an experienced session drummer from New York.  The result, Wildlife, did not yield any big hits as the new band seemed to be finding their feet.  McCartney as a songwriter, could write for himself, but seemed to have trouble writing for a band. For me, it contains two very good songs but are a bit long and unshaped.

McCartney expanded Wings to include another guitar player, someone more attuned to spitting out solos.  Paul was an experienced guitar player but seemed to want another player on stage and someone he could hand off the duty.  Their next project

turned out to be Red Rose Speedway, known primarily as the album with “My Love” as the single.  “My Love” was a big hit but drew the same criticism as he received from Ram, overblown sentimentality.  It featured a big string arrangement and a measured solo from Henry McCullough, his new guitar player.  McCartney was known to have said he felt compelled to build in the solo for McCullough, which probably didn’t help the friction between them.  Red Rose Speedway produced no other hits and was derided for songs that might have been McCartney rejects in previous years.  It has some very pleasant songs if you give it a listen.

McCartney was hired to write the theme song for Live and Let Die, the new James 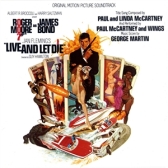 Bond film.  Former colleague, George Martin, was also hired to write the film score for the film.  The theme song was big, loud and packed a wallop.  It also announced that McCartney was up to the job of delivering a big hit.

The future looked bright.  And then, McCartney’s band fell apart.

In 1973, as McCartney was planning his next album, he decided to record it in Lagos, Nigeria.  Yes, you read that correctly.  EMI, his record company owned recording facilities there, but he was advised against the trip for health and political concerns.  The experience, although producing some of his best material, presented many problems.  EMI’s facilities were poor and considerable work had to be done to make it satisfactory.  McCartney was robbed at knife point where he lost lyrics and sheet music to songs under construction.  He was also criticized for exploiting African music, although not as much as Paul Simon would be a decade later.  Prior to the bands departure for Nigeria, both Seiwell and McCullough quit; so it was the trio of Paul, Linda and Denny who recorded the album.  McCartney had to transfer the 8-track recording to 16-track tape during final production work back in England. 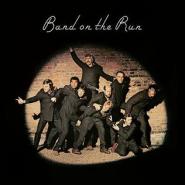 Band on the Run became a top selling album of the year and is considered one of McCartney’s best and most enduring works.  As technically challenged as the project was, it won a Best Engineered Grammy Award.

He also produced a pair of nice songs on the single, “Junior’s Farm” / “Sally G” (1974).  McCartney gained back some of his hard-rocking street cred with “Junior’s Farm”. 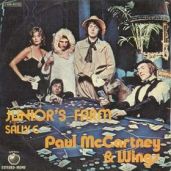 With the success of Band on the Run, and then “Live and Let Die'” and “Junior’s Farm”, McCartney had reestablished himself.  In the next two years, McCartney would release Venus and Mars, and Wings at the Speed of Sound, two more highly successful albums.  He would then embark on his first world-wide tour.

In six short years, he would essentially reinvent himself as Paul McCartney, solo artist.  As a former Beatle, who was known for writing big, commercial songs, his early years as a solo act were challenging.  Harrison, Lennon, and eventually Ringo, all scored solo hits.  The pressure was on McCartney, and in time, he delivered.  Forty-eight years after his first solo album, he’s still delivering.