Most people remember him as Gomez Addams of The Addams Family, or the two episodes as the Riddler in Batman.  John Astin has been an actor since the mid 1950’s, and now in his eighties he teaches acting and directing at Johns Hopkins University.

He begin on the Broadway stage, and has well over 150 television and film acting credits and a bunch of directing assignments in his long career.  The Addams Family was his biggest acting gig, which lasted two seasons and 64 episodes, and continues to play in reruns for than 50 years after leaving the network.

Astin is one of those actors that we know his face from many acting roles, and remember The Addams Family, but couldn’t tell you what else he done.  Character actors aren’t remembered for their specific screen credits, only the frequency and type of role they often play.

Astin was attached to a number of television series after The Addams Family, and made the rounds of episodic and anthology television, usually as whacky characters, where he also worked as a director.  He starred in two television films as Evil Roy Slade, which may have been pilots for a proposed series). He also had a number of small roles in feature films, and was a successful voice actor.

Although predominately known as a comic actor, Astin did appear in a number of dramatic roles.  Audiences probably expected him to flash the broad Gomez Addams grin, but his dramatic skills were probably overlooked.  Astin appeared in three episodes of Rod Serling’s Night Gallery, which allowed him to turn the Gomez Addams grin inside out and feel elements of torment.  He also directed three episodes of the series.

In the 1970’s, Astin was married to Patty Duke, and also adopted her son Sean (Rudy, Lord of the Rings) who took Astin’s surname.  He and Duke were divorced in the mid 1980’s. Later in his career, Astin seemed to refocus on the whacky characters, like Buddy, his reoccurring character on Night Court.

While he had a long and successful career, Astin’s time as a lead actor and director was brief. Although his talent and depth of his craft was respected, he was more of a specialist, brought in more specific roles. As his demand as an actor decreased, he could find jobs with his distinctive voice, that matched the expressiveness of his facial features.

Then came the opportunity to return to Johns Hopkins where he had earned a degree in drama in the 1950’s, after studying mathematics at Washington & Jefferson College.  Returning to Johns Hopkins, he is credited with revitalizing the drama department, when the university restarted it years after the program had been discontinued.

In a sense, Astin completes the cycle, not only returning to his alma mater but refocusing on stage work. After he graduated, he spent several years refining his craft on the New York stage before television and film roles emerged. Prior to his teaching gig, Astin spent years touring in a plays about Edgar Allan Poe and Linus Pauling. 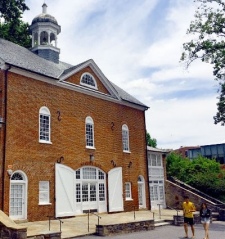 While leading man fame might have been fleeting, he now has a theater named after him.

Hopkins president Ronald J. Daniels said: “The John Astin Theatre in the Merrick Barn will be a permanent embodiment of your tremendous legacy already so beautifully reflected in the artistry of the students you have taught and the joy of audiences you have touched.”

How’s that for lasting recognition!