Open up any page in Elvis’ autobiography and you hit gold, like dropping the needle anywhere onto his vast discography. Elvis’ career is now into decade number five.  Elvis Costello was a gangling British punk kid who burst onto the recording scene in America somewhere around rise of the punk era, but Elvis was no punk, even if some critics lumped him into that genre.

Elvis was a hipster, bursting with energy, an earful of melodic hooks and clever musical ideas.  His first decade of albums is what I refer to as his classic period.  His musical output was tremendous, ten albums in ten years.  However, I denoted a big shift with his  last two of these albums released in 1986, King of America and Blood and Chocolate.  It would be three years before Elvis was heard from, with a new album and a new record label.

The first thing I noticed about Elvis was not his nerdy glasses or his unconventional vocal delivery, it was his songwriting.  Elvis certainly didn’t look or sound like a rock star, but in the late 1970’s as the tectonic plates of rock were shifting, and a whole new “anti-rock star” vibe would sweep into clubs and then radio.  Every few years there is a new musical wind blowing through the industry, and Elvis rode this wave.  The difference between Elvis and many artists that would be part of this new trend, Elvis was a serious and talented songwriter. Most of those folks fell by the wayside years ago, but Elvis endured, and prospered.

Even early in Elvis’ career, he began experimenting with other musical styles.  He evolved, and instead of riding the current trend, he moved the needle of popular music. He was certainly the angry young man, who in under three minutes could evoke your emotions and tell you a compelling story, but Elvis was part of a group of English singer-songwriters, Paul Weller, Graham Parker, Joe Jackson and Nick Lowe, that inherited Pete Townshend’s ballsy worldview. These were not our mellow James Taylor/Gordon Lightfoot singer-songwriters. Lowe was the perfect mentor for Elvis during his early albums, helping guide his songs and getting the right performances on vinyl.

Early on, Elvis could turn on a dime and let his high energy melt into a ballad like “Alison” or “Almost Blue.”  His albums rocked, but began to explore new ground and dial down that energy into more mid-tempo, soulful performances.  Elvis was evolving.  Elvis grew up in a musical house, his father a jazz trumpeter, so there was a variety of music in his life from an early age.  Elvis would explore these styles on future albums as his composition became more complex and demanding of the listener to peel the musical onion of his songwriting.

“I never had any illusion that Almost Blue would make me a star in Nashville.  The cover originally feature a sticker that read WARNING: THIS ALBUM CONTAINS COUNTRY AND WESTERN MUSIC AND MAY CAUSE OFFENSE TO NARROW MINDED LISTENERS, but that was just teasing people who imagined we should be presenting “More New Wave Hits.”

Elvis moved on from Nick Lowe to work with other producers as he expanded his musical pallet.  After Almost Blue, Elvis shifted gears again. Geoff Emerick produced Elvis’ album, Imperial Ballroom.  Emerick worked with the Beatles during their mid period where the rules of the recording game changed.  Emerick help Elvis’ songs reflect both a lyrical maturity and sophisticated arrangements. Elvis’ songs weren’t tied to a period of music. Strangely, none of these more mature songs charted very high, but the album would make the top lists of albums of the decade.  Elvis would work with Lowe and Emerick again, as people moved in and out of his musical orbit.

It was through Lowe that Elvis met Johnny Cash (Lowe’s father-in-law), and other country icons that would lead him to Nashville and fling open the doors of his musical journey.

“What are standards?…These songs are there to help you when you need them most.”

That’s how Elvis viewed the Great American Songbook.  Elvis had a reverence for many kinds of music, the key being they were honest and genuinely portrayed the human experience.  From torch singers to country & western, to the depths of jazz, Elvis appreciated those who had traveled the backroads and journeys of heartache. Those shards of human emotion had been with him from that first album, but would be the spine of every album that followed.

In the early 1980’s, Clive Langer and Alan Winstanley produced two of his albums, which even Elvis felt were off-target, but he managed several hits out of them.  Music was changing and as a trendsetter, Elvis was trying to figure it out, with strong guidance from his American record company.

“Otherwise, I’d think of those years in the mid-’80s as “The Land That Music Forgot.”  A lot of the hit records of the time were not songs as I understood them, but shiny, open-ended sequences of music, mostly conjured up in the studio.  I tried to go along with the plan for a while, but I felt like a blacksmith in a glass factory.”

After switching labels, Elvis resurfaced in 1989 to release Spike, containing several tracks co-written with Paul McCartney, including “Veronica,” a modest hit. About a dozen songs came out of the writing partnership which Elvis also included on his next album. Several other co-written tunes surfaced on McCartney albums. That experience was not without some creative tension, as Elvis describes in his book.

“Give our vocal registers, it was inevitable that I would end up harmonizing below Paul, which made a couple of tunes sounds like they were trying to be Lennon-McCartney songs.”

Elvis was in a collaborative period over the next decade with McCartney, Richard Harvey, Burt Bacharach, Allen Toussaint, Brodsky String Quartet, Anne Sofie von Otter, The Roots and Bill Frisell.

These collaborative albums would be interspersed with solo works and reunions with his primary backing band, the Attractions.

Until his album with Bacharach in 1998, I hadn’t paid Elvis much attention since the early 1980’s. I found his work somewhat unfocused and his pop albums repetitive, and lacking the fire of his earlier efforts. Even his work with McCartney, I found curious, but somewhat underwhelming at first and missing their charm.  I should have taken the longer view with Elvis, which in a pop culture world is hard to do, given it’s rapid change.

Painted From Memory, has a lot of high points, it’s a “thinking man’s” pop album. What it doesn’t have, is a lot of Bacharach or Elvis musical hooks, which is unusual for these melodic maestros. “I Still Have That Other Girl” won the duo a Grammy Award.  Of working with Bacharach, Elvis couldn’t understand why Bacharach’s music was derided as “easy listening”, when the songs were difficult to play because of how finely crafted they were, and because those songs conveyed such underlying currents of complex human emotion. 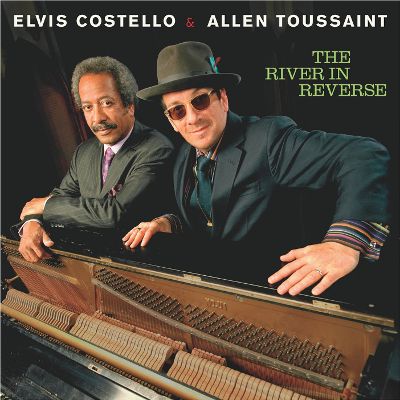 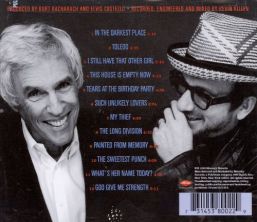 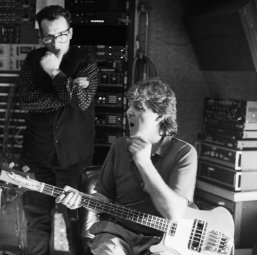 “I never imagined that Painted from Memory was made for the hit parade. It was something that I thought people might listen to in solitude, over a lot of time. It seems that has been the case for many listeners.”

Elvis continued to write and record, releasing a solo or collaborative album almost annually. He returned to country, tried roots music, hip hop, performing with a string quartet, orchestral-backed versions of his songs, jazz, and returned to his pop roots with deeper textural range.

National Ransom, released in 2010, completely passed by me without notice, and that’s too bad.  It is a very deep album, an eclectic mix of styles, mostly in a folkish vein, although once in a great while it kicks into a higher gear.  Produced by T-Bone Burnett, it almost drowns in style, but when Elvis undertakes a project, hi is always all-in.

In 2013, he took a break and focused on touring, including solo outings, and a television interview show. He also dealt with a health issue, and raised his twin boys with wife Diane Krall. His life was indeed full and he was now at the stage where he was being recognized for his body of work. Bestowed with awards and platitudes, he had arrived at a stage where people were looking back at his career, rather than forward.

Look Now, released in 2018, besides the Elvis originals, featured three songs written with Bacharach and one with Carole King. It’s mostly a mellow and mid-tempo affair, reminiscent of Painted From Memory.

“I’ve absorbed almost everything I know from listening to records; the test came from trial and error.  All these songs, souvenirs, and fragments of history are just reasons to love one another more.”

I believe that Elvis was born a generation late. He had great admiration for songwriters like Bacharach and King, who sat in front of a piano and wrote songs for a living. The difference being that Elvis wanted to be a performer from the start, but he seems to thrive on the songwriting process, blending influences and collaboration. His autobiography is much less on the performing and more about creating.

As a performer, Elvis has a voice that seems unpolished and slightly raw, but he uses it well, particularly for ballads and torch-heavy songs. This is his forte. He can belt out “Pump it Up” or “Peace, Love and Understanding” with gusto, but the voice, now with age, embraces with sadness and contemplation, which is his A-game. That’s my opinion.

His fourth album, Get Happy!, was the first one I bought. I was knocked over by how prolific he was in writing so many original, catchy tunes. Over time, his songs got a little longer and instead of 20 on an album there were 12. In the past few years he has re-released those old albums with a second disc of demos, alternate version and live tracks. The man was writing and recording constantly, and the works in progress are revealing of his work methods, as are the experiments with different tempos and style. The studio is his laboratory.

I highly recommend this book Unfaithful Music. Besides a good read, Elvis is a fine writer. He doesn’t dish pop star trash, he just opens up to reveal his life and how that influenced his music. Read the book, or the two-disc compilation, The Very Best of Elvis Costello (Rhino, 2001) and GET HAPPY!