When you think of the members of the musical group Genesis, you likely don’t visualize Anthony Phillips, or Ant, as he is known.

Phillips was a founding member of the band and left after their second album, Trespass, years before they achieved platinum selling status.

You might think that Phillips disappeared quietly into obscurity, sad that he missed out on the music videos, arena tours and glamour that befell Phil Collins. Actually no, Phillips never wanted that lifestyle or stress, and he’s fashioned a very successful and fulfilling musical career.

One of Phillip’s many albums was called Invisible Men, a term that describes his own pop music career. He has been a prolific songwriter with more than 34 albums to his credit. So, you might be wondering, why haven’t I heard of him? 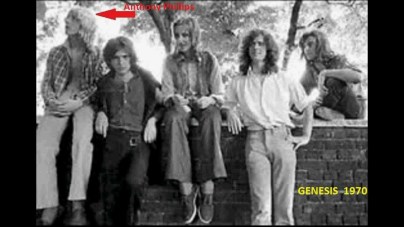 After leaving the group in 1970, Ant studied orchestration and harmony externally at the Guildhall School of Music and Drama in London.  After passing his LGSM exams, he taught music at Reeds School and Peper Harrow whilst continuing to compose and record in his home studio.

Phillips has devoted the past forty years to honing his musical skills so that he could compose and orchestrate music for television, film documentaries and other artistic projects. He has literally filled a library with music that can be used by others for their films and shows.

His many albums go far afield from the pop music he wrote with Genesis, but he has dabbled in pop music from time to time. Phillips does not strive to write hits and that’s sometimes made finding a distributor for his releases a challenge.

The albums he recorded in the 1970’s and 1980’s are being rereleased with many bonus tracks and remastered with sterling sound quality. These collections are treasure chests of haunting melodies and reflective lyrics. He mixes folk, pop, classical and other influences in his music.

Phillips did not enjoy the life of a pop musician. He left Genesis in order to not tour and appear on stage. He found happiness being a composer and quietly creating his songs to fulfill his desire to go in a different artistic direction.

His first album under his own name was The Geese & The Ghost in 1977, followed by Wise After the Event, Sides and Slowdance.  Many of his albums had been collections of pieces of music, mostly instrumentals on guitar or piano, released with titles like Private Parts & Pieces, which became a multi-album series.

Phillips has worked with many other musicians and composers like Andrew Skeet. Joji Hirota, Guillermo Cazenave, Enrique Berro Garcia, Harry Williamson and Richard Scott to explore other styles of music from ensemble, duet and orchestral compositions.

Once in awhile, Phillips has worked with Phil Collins or Mike Rutherford of Genesis, but that was mostly in his early solo years.  Phillips has not revisited Genesis, although he did participate in one retrospective, but he prefers to work in the present.

I became a big Genesis fan and as such kicked over the stones of the early band history and came across Phillips’ name. A few years later I found a couple of his early vinyl albums, which I still have.  I liked the quiet folkiness and earthiness of his music, his soft easy voice and the mix of very interesting chord progressions.  Mostly his songs were acoustic instruments, often his playing multiple instruments and the layering of his vocals.  Over time, I found a several more of his albums, and then again, I lost track of him for a few years.

Once Al Gore invented the internet, I found several later Phillips works on CD, including Invisible Men, a more contemporary, electronic project.  Then I lost track of him once more until I saw that his early vinyl albums were new available as remastered CDs along with demos and alternative versions of his album songs.  I was pleased that Esoteric/Cherry Red Records in England was handling the release of his early music.  I discovered that Phillips had been very prolific during the years in between when he surfaced in my life. I uncovered more of his projects, although some were out of print or very expensive to find.

Anthony Phillips is quite the musical explorer. He didn’t turn his back on pop music, but he didn’t limit his choices to just that slice of the creative pie. He did though turn his back on being a rock star. Who wouldn’t have wanted to travel the world and make millions of dollars in a top rock band? Anthony Phillips for one.  He did not like live performances or the pressure to write hits, he wasn’t emotionally cut out for that, so he created a life where he could pursue music on his own terms.

How many of us can say that?