That phrase probably followed James MacArthur his entire career, and defined it for a lot of people, but he had a very good career before Hawaii Five-O.

He got his start in the early 1950’s in a few film, then some television roles, as he gravitated toward some roles for Walt Disney. MacArthur was a student at Harvard at the time. In 1960, he made two important films in his career, Kidnapped and Swiss Family Robinson (below). He also made his Broadway debut. His star was made, forget college.

In 1962, he co-stared in Spencer’s Mountain in a coming of age role. He had already been married four years but he looked the part. He had that youthful, rugged, but fresh-face look that made him perfect for Disney and other family-fare.  Spencer’s Mountain was one of his best dramatic roles, and probably my favorite role of his.

In Spencer’s Mountain, he played Henry Fonda’s oldest son, trying to find a way to get to college, the first of his family to do so, but not disappoint his family and what he contributed as a working son.

One of his other film roles was in The Bedford Incident. He specialized in roles of earnest, inexperienced young men who had to deal with adult situations. The Bedford Incident, a taught Cold War film, also starred Richard Widmark and Sidney Poitier.

For the rest of the 1960’s, MacArthur would move between television and film until Steve McGarrett called.  Actually, MacArthur has a small part in a film produced by Leonard Freeman, and it was Freeman who remembered MacArthur and it led to the Danny Williams role.

When he did get to be front and center in a Hawaii Five-O episode, MacArthur was quite good. He had numerous undercover assignments, as a soldier or draft-dodger, and got to have some romantic entanglements.

He was with the show for 11 of 12 seasons, bowing out after 259 episodes. He revisited his Danny Williams character in a pilot (1997) to update the series, this was before the current reboot. His character became the Governor of Hawaii. The pilot did not lead to a continuation of the series.  However, MacArthur was even going to make an appearance in the current series in 2010, the year he died, but that didn’t happen. 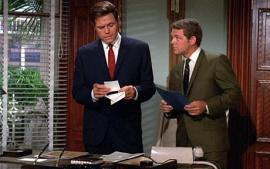 After Hawaii Five-O, he mainly appeared on television but he found a few stage roles that he spent a lot of time.

As Hawaii Five-O cast members began to pass away, it was MacArthur who made appearances and kept the flame alive.

When he left the series, he said later, there was no friction with the network or Jack Lord, he simply decided he’d had enough and wanted new challenges.

MacArthur was the son of actress Helen Hayes and playwright Charles MacArthur.