Some great choices there.  If you said, pick their most complete album, I’d answer Aja.  Every song a pearl.  But overproduced in my opinion. 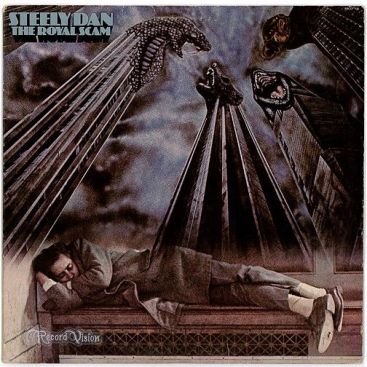 But the request was to name your favorite album, and for me, that’s The Royal Scam.

It is not a perfect album but the album’s vibe is amazing.  It is their last blue jeans and t-shirt album. Aja, the next album would see Fagen & Becker turn more to cool jazz stylings to embellish their well-crafted and highly polished creations.  Aja is upscale, designer threads needed to listen to it.

The very first time I heard The Royal Scam, I knew it was special.  The songs had a haunting feel to them which matched the stylized painting on the front cover.  I’ve searched to confirm this, but I’ve read that the cover art was designed for an unreleased Van Morrison album, but the man sleep on the radiator was added for this project.  Whatever the origins and intended purpose, it aligns with the eerie and mournful music and lyrics inside.

All songs written by Donald Fagen & Walter Becker, except “The Fez” which was co-written by Paul Griffin.  The lyrics was very obtuse, you can’t listen a time or two and know what they are musing.  This is an album about people on the other side of the alley, burned-out dreams, bets that don’t pay off, choices you can’t unmake, danger on the closed side of the door. Not your typical So Cal love songs.

Fagen & Becker draw from various sources for their lyrical content, sometimes from a world far removed from each of us.  Drug dealers, gangsters, cheating lovers, souls lost in the cracks of society, people out of mind.  I’m reminded of writer James Ellroy (L.A. Confidential), a master at taking you through the underbelly of places you walk everyday but only see the sunshine, not the grime.

There were five guitar players listed on the album credits, and this was perhaps the most guitar-oriented of their albums.  Beginning with Aja, Steely Dan albums would veer more towards the Doobie Brothers with Michael McDonald.  The rough, edgy guitars would become clean and precise.

Rolling Stone ranked “Kid Charlemagne” as the number 80 out 100 greatest guitar solos. Most of the guitar solos on the album were done by jazz guitarist Larry Carlton.  It is his work that shifts the album into a higher gear.

Walter Becker: “If that is the definitive Steely Dan guitar album, then Larry Carlton is the reason why. He contributed quite a bit to the tunes.”

Donald Fagen: “He’s a real virtuoso. In my opinion he can get around his instrument better than any studio guitarist.”

“Kid Charlemagne” was the lead single from the album and only hit number 82, and curiously, the reviews for the album were mixed.  A combination of thick guitar work and clavinet keyboards, accented with a female chorus behind Fagen’s vocals.  The song chugs along at a steady pace.  Larry Carlton shines on the guitar with a 50 second guitar solo.  If you do your research, this song is about Owlsey Stanley, a famous LSD supplier.

You turned it on the world
That’s when you turned the world around
(Did you feel like Jesus?)
Did you realize
That you were a champion in their eyes?

“The Caves of Altamira” turns up the heat with nice horn riffs at the chorus, as Fagen multi-tracks his own vocals.  A lovely sax solo by jazz artist John Klemmer.  Horns take center stage on his song, beauty over power.  The song is about the Caves of Altamira in Spain where prehistoric parietal cave art work of polychrome paintings were discovered in 1868.  How’s that for subject matter?!

“Don’t Take Me Alive” starts with an angry guitar riff by Larry Carlton, returning to guitar/keyboard riffs that drive the song.  This song has a lot of guitar work going on apart from the Carlton solos, the fills and riffs are thick.  Danger and the threat of being stormed by cops shifts the album back into the dark.

“Sign In Stranger”  returns to the keyboard being upfront in the song with guitars riffing behind, then some accenting guitar work peaking around the verses.  Elliott Randall handles the main guitar work here, working in conjunction with the distinctive piano by Paul Griffin.  Horns appear toward the end of the song as the guitar cuts loose.  This is some sort of science fiction based song; maybe you can figure it out, I couldn’t.

“The Fez” is a riff song, very basic lyrics, it is a beat heavy song, primarily an instrumental.  One of the weaker songs on the album in my opinion, lyrically bland, and curiously released as a single because of the driving beat.  The fez is another name for condom.  There you go.

“Green Earrings”  a groove song, no thick lyrics, just a chance to build some interesting musical expression around the electric piano.  Denny Dias and Elliott Randall handle the various guitar solos.  Green earrings are those stolen, not for a gal, from a gal.  Not exactly a love song.

“Haitian Divorce”  another groove, a reggae type guitar riff drives the song, with a talk box guitar effect (Joe Walsh, Peter Frampton) by Dean Parks, manipulated to fit the reggae vibe of the song.  Parks is one of the all-time best session guitarists and his work here is superb but almost hidden by the talk box processing.  A man and woman go to Haiti for a divorce, she has a one-night stand and returns to her man, with a baby from that one night.  Maybe a love story, but a weird one.

She takes the taxi to the good hotel
Bon march as far as she can tell
She drinks the zombie from the cocoa shell
She feels alright, she get it on tonight
Mister driver
Take me where the music play
Papa say

“Everything You Did”  More nifty guitar work by Carlton on a generally low-key piano/organ/electric piano song.  Carlton provides the fills between the chorus and verse, and accentuates with several subtle solos.  A song about an unfaithful woman and her man wants to know what she did.

“The Royal Scam” could be the best song on the album, saved to close it out, like many great albums of the period.  Carlton earns his paycheck on this song, he’s everywhere, but lets the piano and organ set the mood.  A very well produced song, horns and chorus thicken the choruses.  The American Dream that did not work out for these Puerto Rican immigrants, it rang false, and they were left to survive.  This is a song of disillusion and the harsh realities.  Think back to the cover art, sleeping under the tall, hostile skyscrapers – the America for some who are scammed by the dream.

By the blackened wall
He does it all
He thinks he’s died and gone to heaven
Now the tale is told
By the old man back home
He reads the letter
How they are paid in gold
Just to babble in the back room
All night and waste their time
And they wandered in
From the city of St. John without a dime
See the glory
Of the royal scam

A few of the musical reviews from the time.

“The Royal Scam is the first Steely Dan record that doesn’t exhibit significant musical progress from its predecessor, but that doesn’t mean the album is any less interesting. The cynicism that was suppressed on Katy Lied comes roaring to the surface on The Royal Scam — not only are the lyrics bitter and snide, but the music is terse, broken, and weary. Not so coincidentally, the album is comprised of Walter Becker and Donald Fagen’s weakest set of songs since Can’t Buy a Thrill.” – Allmusic review

“…one must immediately note that their latest, The Royal Scam, is the Dan’s most atypical record, possessing neither obvious AM material nor seductive lyrical mysteriousness. It also contains some of their most accomplished and enjoyable music.” – Rolling Stone review

“There’s more wit, imagination, and musical sophistication in the songs and structures of The Royal Scam than on any LP I’ve heard in ages.” – Bud Scoppa, Circus magazine

Steely Dan played The Royal Scam live on occasion, and Larry Carlton has been along for the ride.  The album is not a literal concept of the hollowness of dream against the bleak reality, of thieves and cheating partners, far removed from the beautiful art of centuries ago where life was brutal, but simpler.